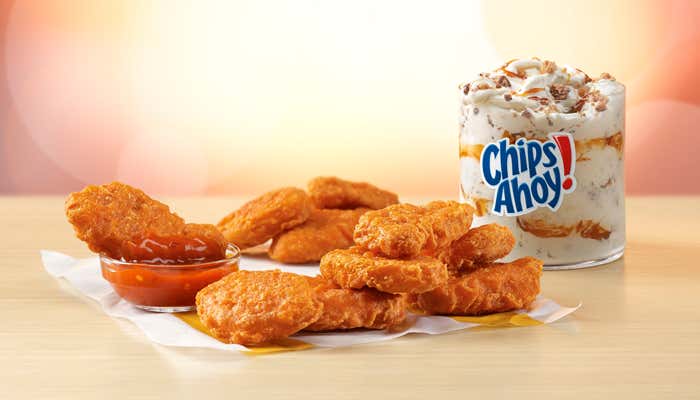 USA TODAY- McDonald's is turning up the heat on its popular Chicken McNuggets. On Tuesday, the fast-food giant announced it will roll out Spicy Chicken McNuggets for the first time ever in the U.S. The menu item will be available nationwide for a limited time starting September 16.

McDonald's said the McNuggets will be breaded with a tempura coating made of both cayenne and chili peppers. It's the first flavor McDonald's USA has introduced to the McNugget since they first launched in 1983.

Clearly spicy nuggets are nothing new to the world let alone the fast food game. But when Fat Ronald and the boys unveil the first change to the OG chicken nugget, it rightfully sends ripples through the culinary world, even if the lead up seems like it was tweeted by 50-year-old social media manager Phil Dunphy.

I'm personally a big spicy chicken guy when it comes to fast food. It doesn't matter if I'm at Chick-Fil-A, Wendy's, or Popeye's. If I can get some spice on my fried chunk of bird, I want it. That being said, I'm a little worried about Mickey D's tinkering with a classic. Regardless of if you are still a diehard McNugget guy or prefer the tasty stylings of the red head girl down the street or someone else, you almost definitely considered the 4 piece Happy Meal your favorite food in the world when your parents shoved them down your throat and gave you the free toy to shut you up. I'd even go as far as saying the Chicken McNugget is just as big a part of McDonald's Big 3 as the Big Mac and french fries. The good food scientists at McDonald's have one chance to make a good first impression with this Spicy Chicken McNugget and if they flop, which could definitely happen since the McNuggets right-hand man known as Sweet & Sour Sauce may not pair with that spicy shell, that's a massive L for not only the company that has willfully allowed its rivals to cash in on the spicy nugget market for years but also hurts one of the biggest brands in fast food. But if it hits, McDonald's may have the most explosive 1-2 punch to beat up taste buds considering McDonald's Sprite is already the hardest hitting soft drink in the game today (Said in the Greg Jennings video Darren Sharper voice).

P.S. I'm a fan of McFlurrys but if McDonald's really wanted to change the fast food game, it would've released a Chewy Chips Ahoy McFlurry. There's a reason hard cookies were the only cookies left on the shelves during the beginning of quarantine and that's because soft cookies are king.