In a digital age and political climate that’s becoming increasingly more toxic and tense, it’s no secret that we’re in unprecedented times. If not for any real reason, then because I just always wanted to use that sentence fragment at the beginning of a meaningless blog about nothing. What I’m actually saying is that social media is at its worst right now. TikTok is being held down by teen stars with unchaperoned mansions, while Snapchat and Facebook are on its ninth hospice stay. Instagram is barely staying afloat by the buoyancy of D-list models, and Twitter has been run into the ground by DSM-5 models with brain parasites. But perhaps the most dangerous and despicable social media platform of them all is a little site known as LinkedIn. 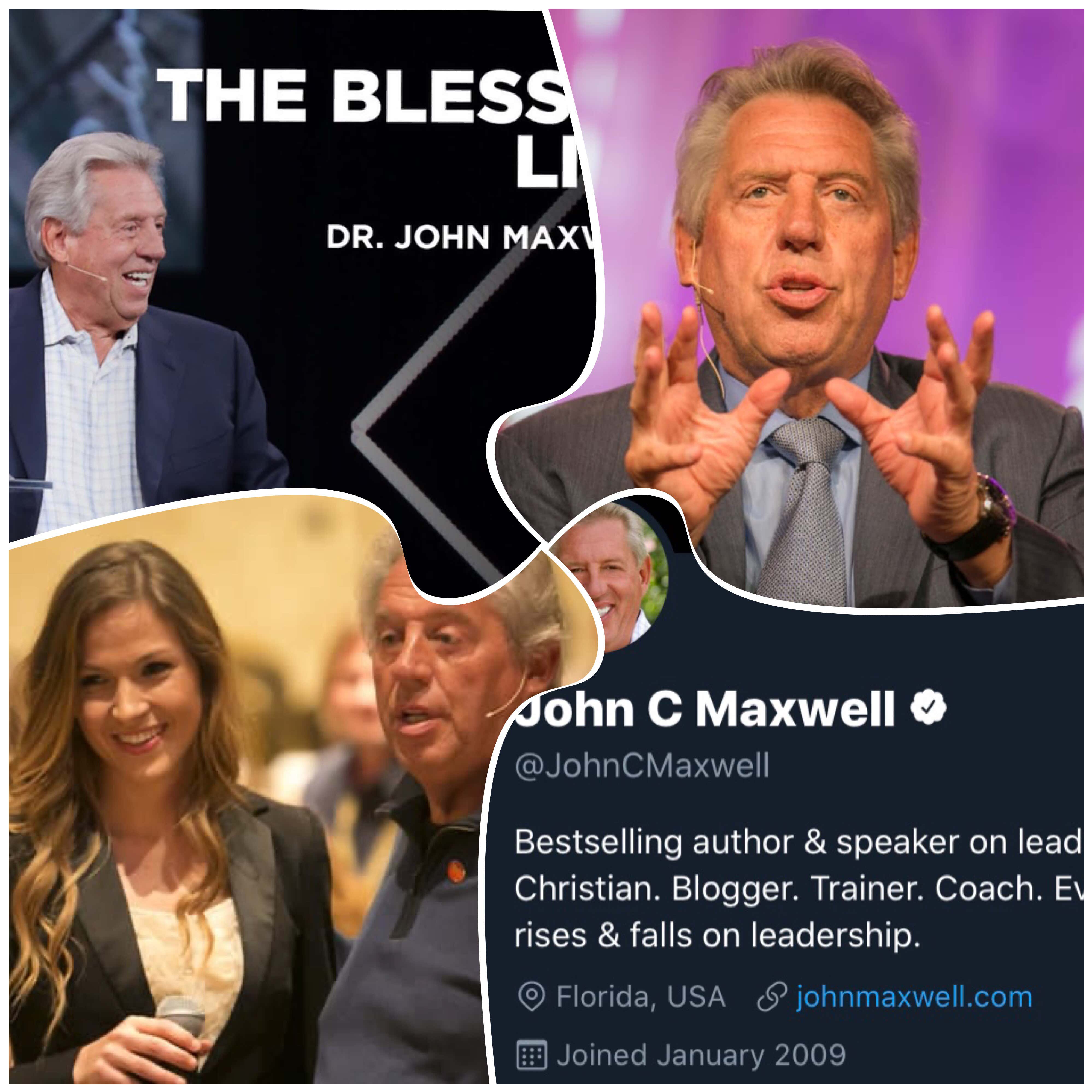 John C. Maxwell is a man of many hats, if those hats were all a slightly different shade of khaki or beige. He’s an ultra successful author, speaker, pastor, leader, trainer, and coach — but he’d be the last person to not let you know. That’s just the type of person he is: A ferocious c- 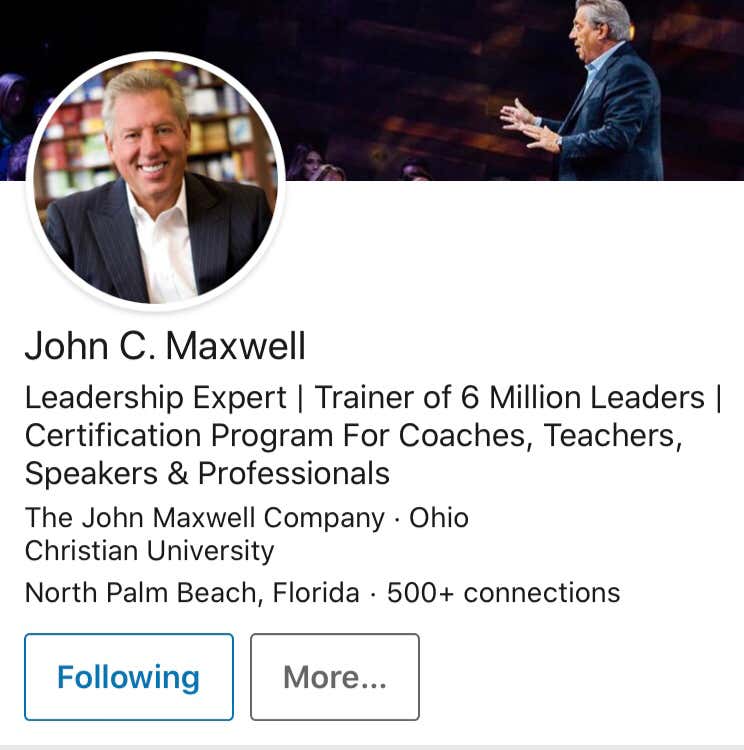 Until yesterday, I had only ever dipped my toes into the class five colon-scented rapids of LinkedIn and its foremost “celebrity” users. But upon examining the profile page of Mr. Maxwell, who’s closing in on a million followers and seven million esteemed trainees, I feel like I’m ready to run directly into a brick wall-induced coma.

Apparently, he’s the multimillionaire author of dozens and dozens of “self-help" books, which are all infested with the same regurgitated “tips” and "advice." If I wasn’t a tried and true miserable hater, I’d say that I respect him more than anything for that. 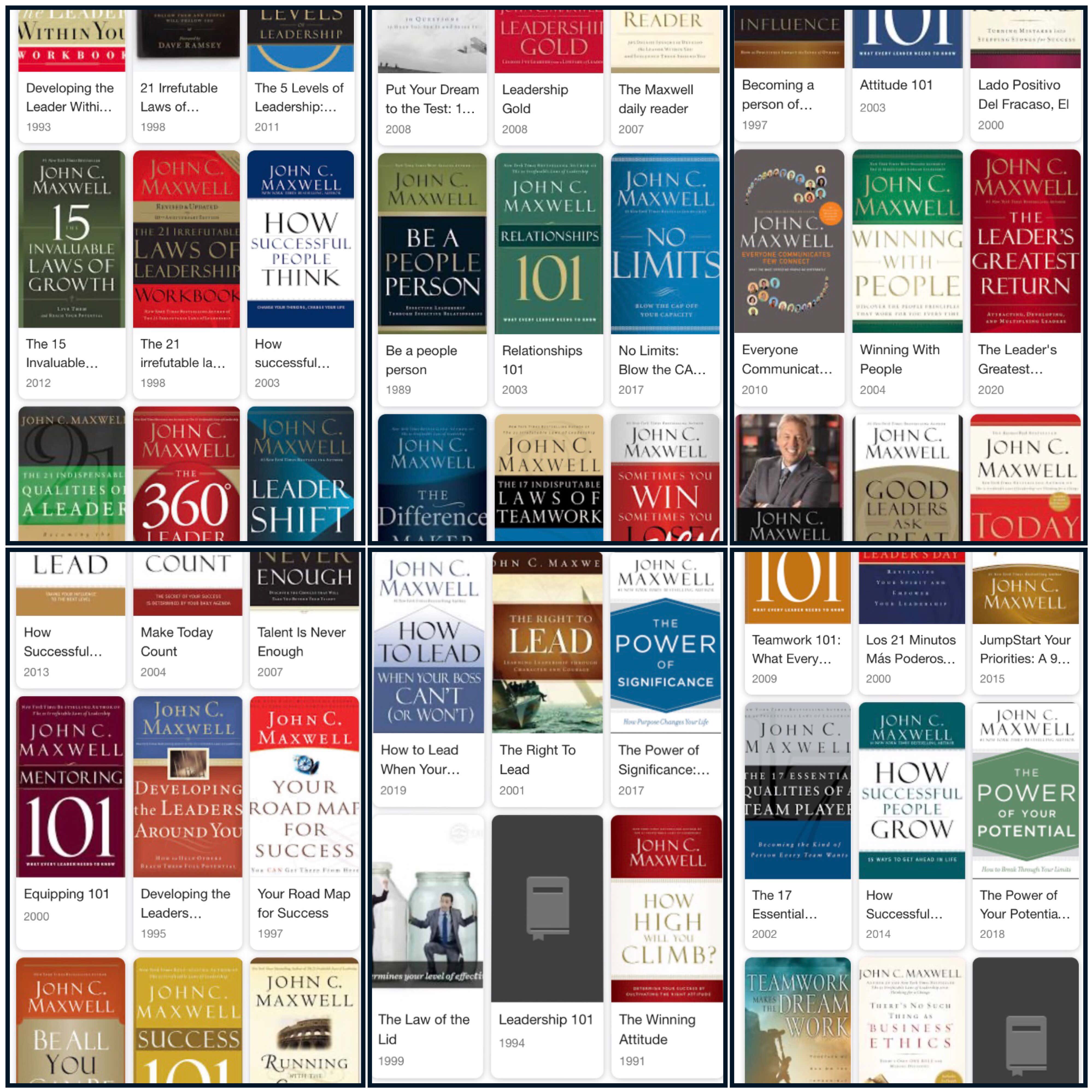 But I am, so I’m only here to hate. His forthcoming book, an autobiographical scratch and sniff detailing his most putrid farts of the last nine decades, is set to release this fall. But in the meantime, John C. Maxwell fans can find him quoting himself – yes, himself – on a social media platform that’s specifically intended for posting your own personal opinions and expressions.

And they’re all thought-provoking doozies that directly originated from the dusty crevices of his elderly brain. 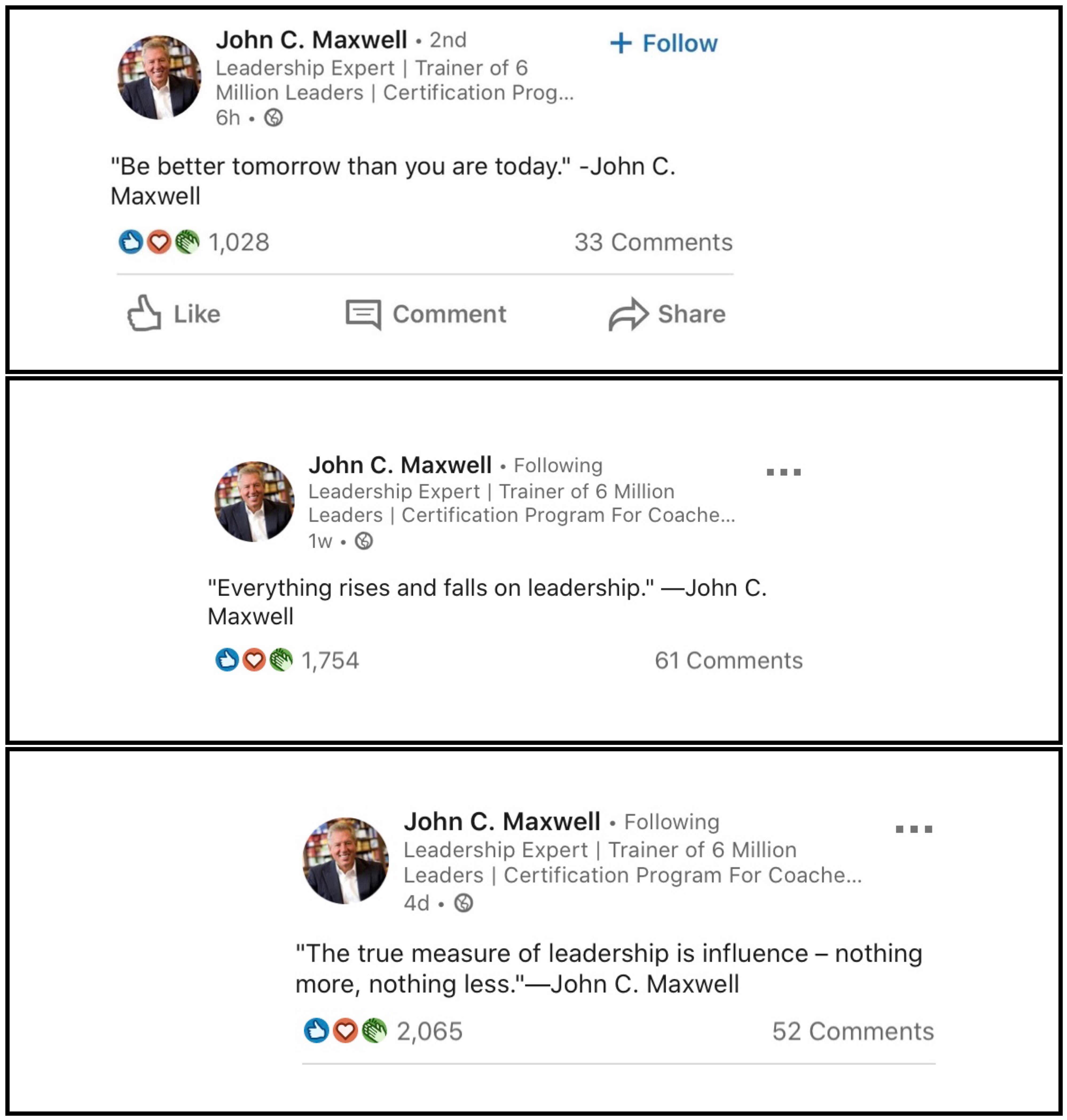 It’s like he heard his uncoordinated grandson’s third base coach mutter “strive to get better everyday” after a tough loss and thought to himself, “That’s a hell of a quote. I just came up with it.”

If Tony Robbins suffocated to death while scuba diving in his own rectum and then respawned at a Cracker Barrel country store, you’d get John C. Maxwell. With a coaching tree that transcends the laws of mathematics and a name that translates to “a man who’s good at flirting with prostitutes,” it’s no wonder John Maxwell doesn’t believe in “impossible.” 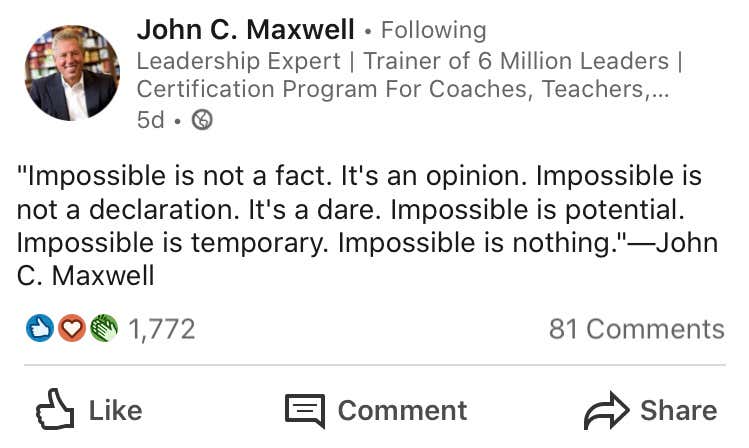 In fact, he believes in the laws of possibility so little that he thought he could get away with plagiarizing a quote from arguably the most well-known athlete in the history of the world. 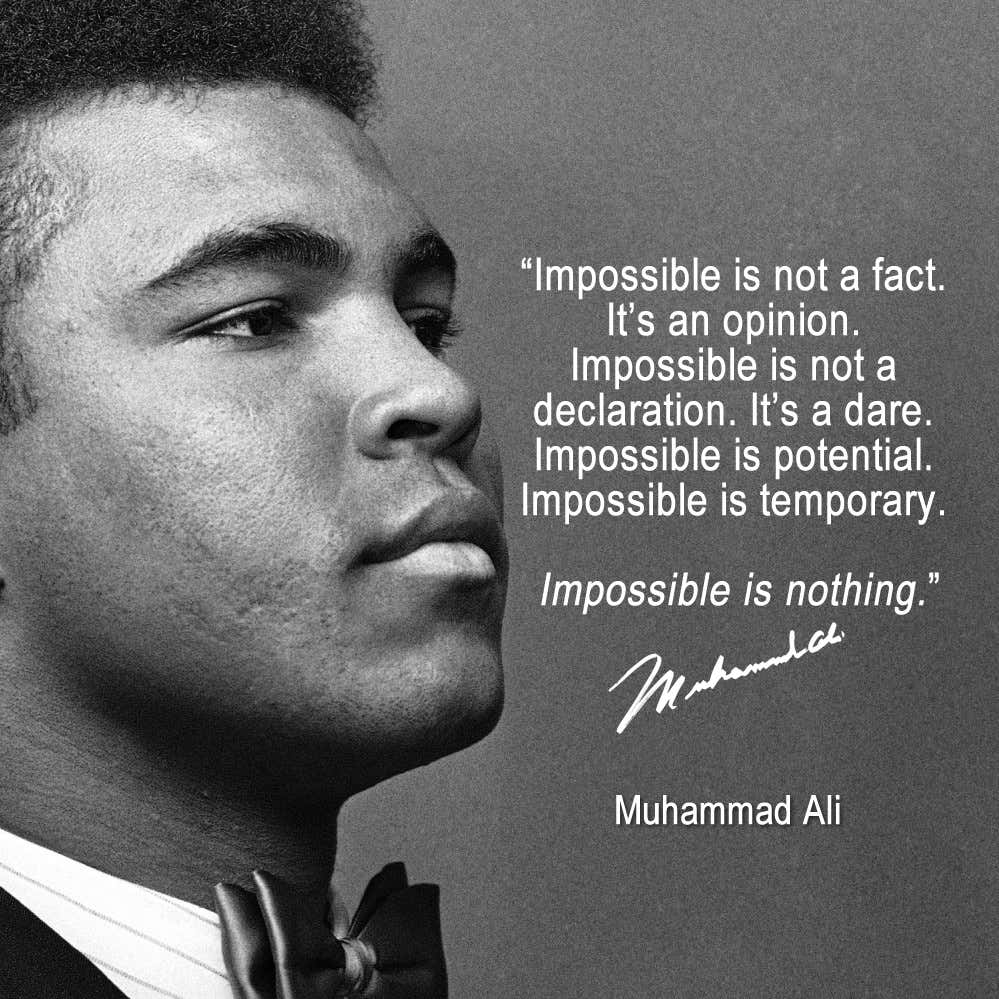 You’d think that after gentrifying African American history and claiming Muhammad Ali’s words as his own, he’d be shunned by the LinkedIn community and its many prestigious and integrity-driven entreprenuers. 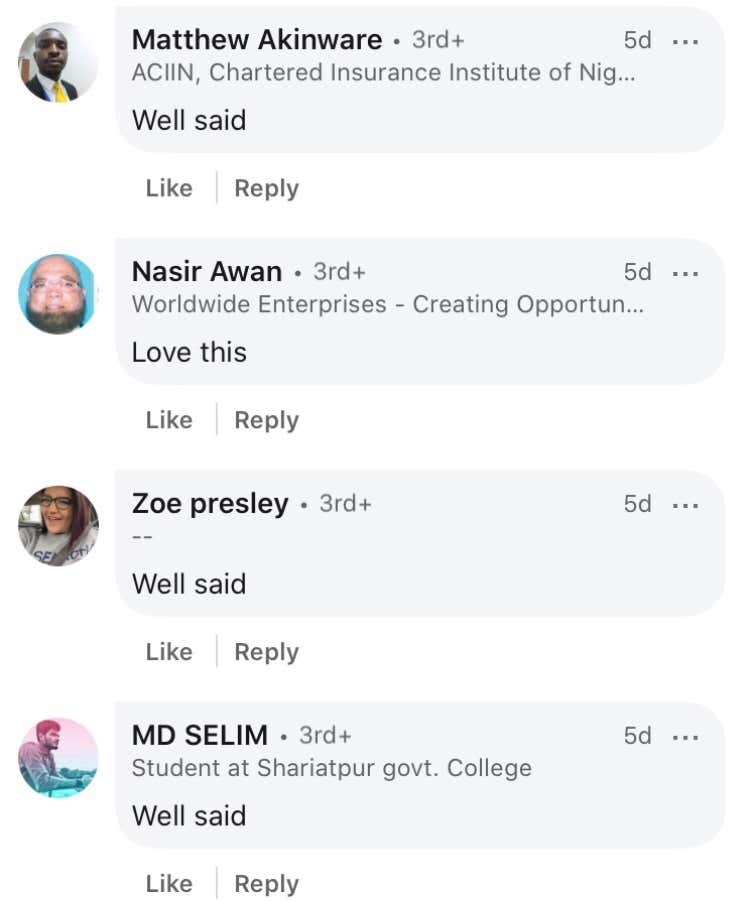 The fact that he not only got away with it, but got praised en masse for "his" powerful words only further proves my theory that this man is literally God, and I will idolize/worship him for the rest of my existence. 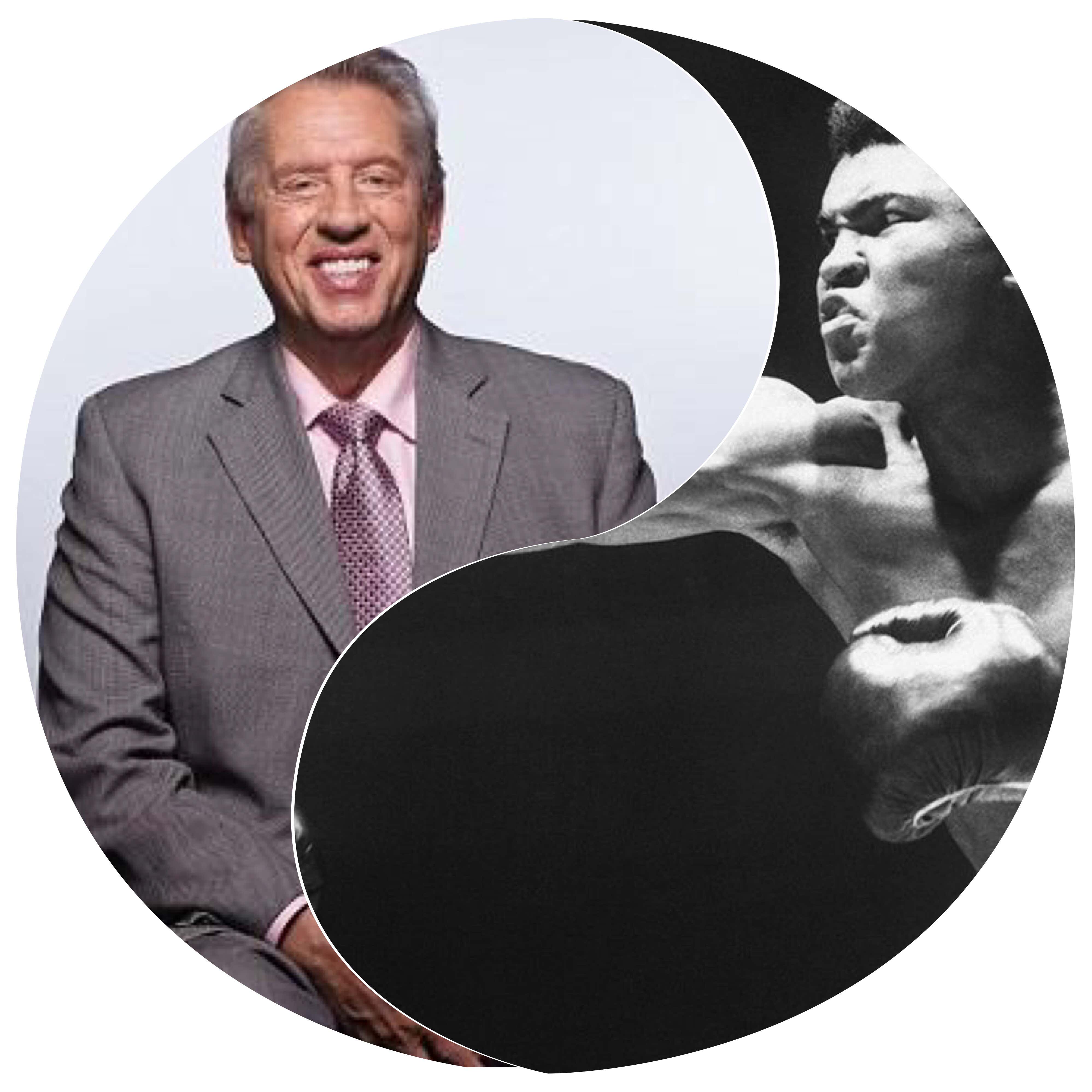 The butter-fried biscuit to Muhammad’s butterfly, and the Hepatitis B to his bee, I truly believe that Father John is the second coming of Christ. 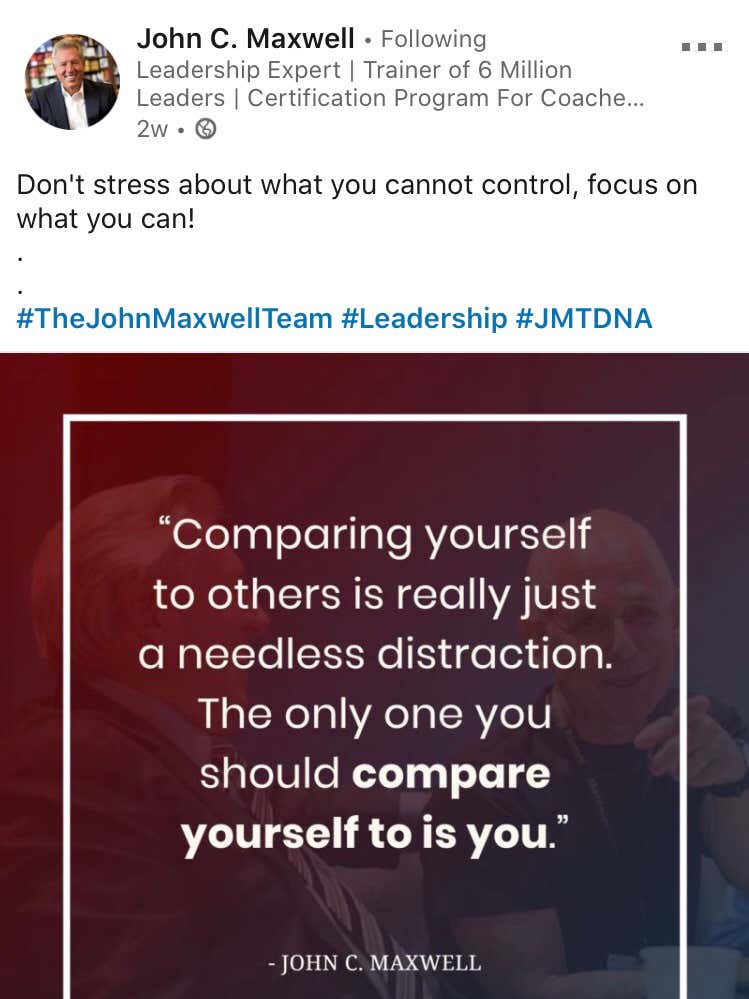 At first glance, this self-cited quote from a 73-year-old bestselling author may look like it came straight from an Odyssey Online article lackadaisically written by a socially anxious college sophomore on a tight deadline, and that’s because it literally did. Thrice. 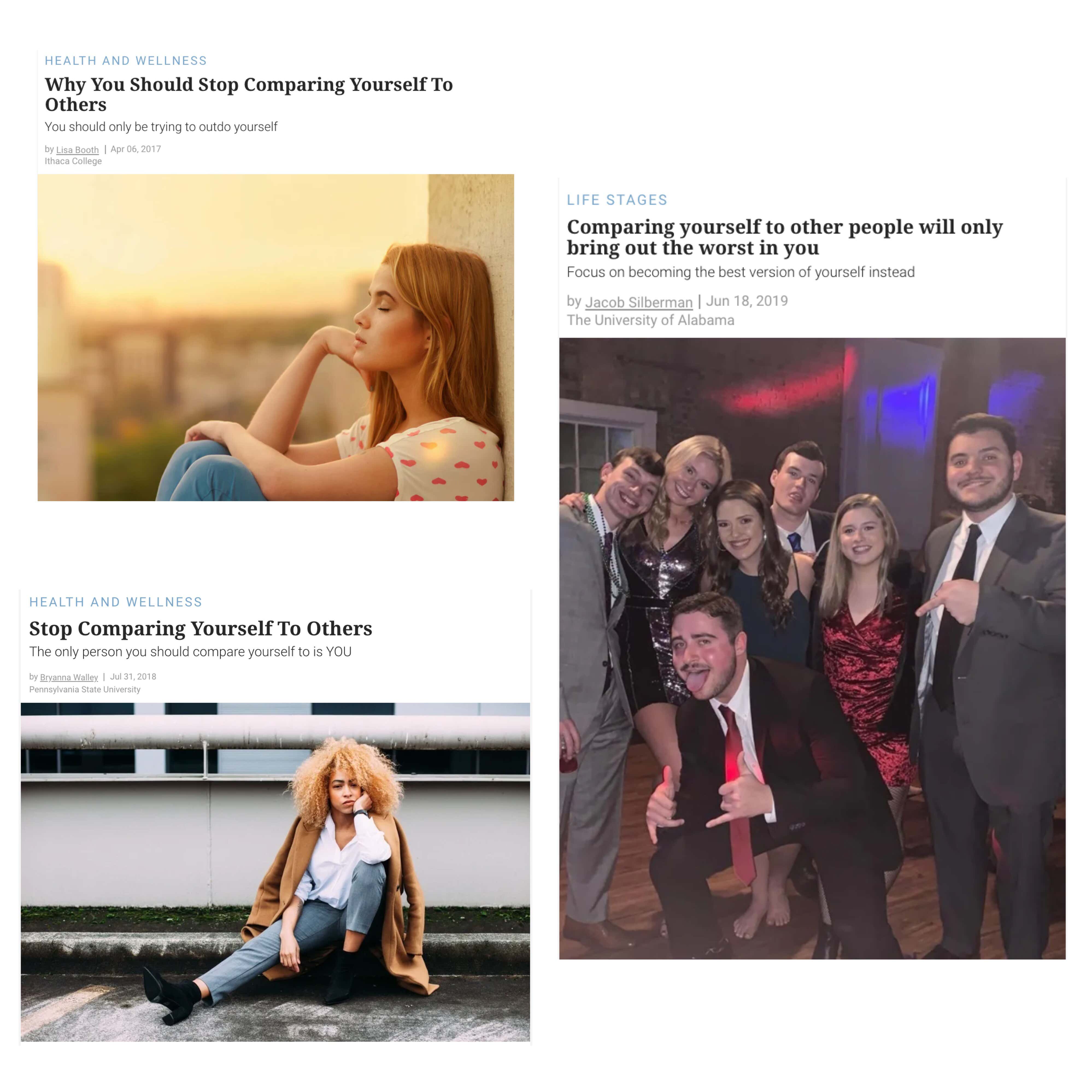 This is the man your former classmates and current cousins are positively reinforcing, funding, and striving to pretend to be on social media. But can you blame them? 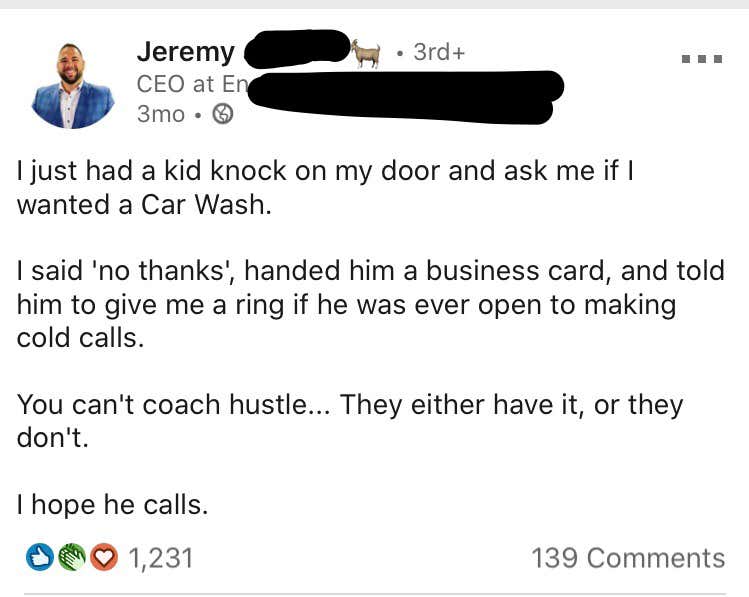 Mr. Jeremy, who conveniently uses an emoji of a goat in his profile name to let other networkers know that he is, in fact, the greatest of all time, gave a little boy his phone number in order to teach him an important lesson about hustle. 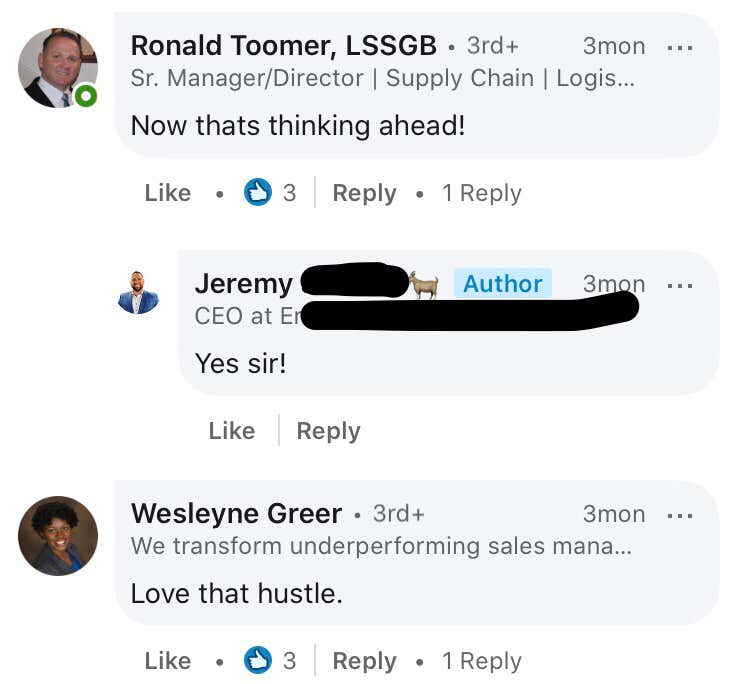 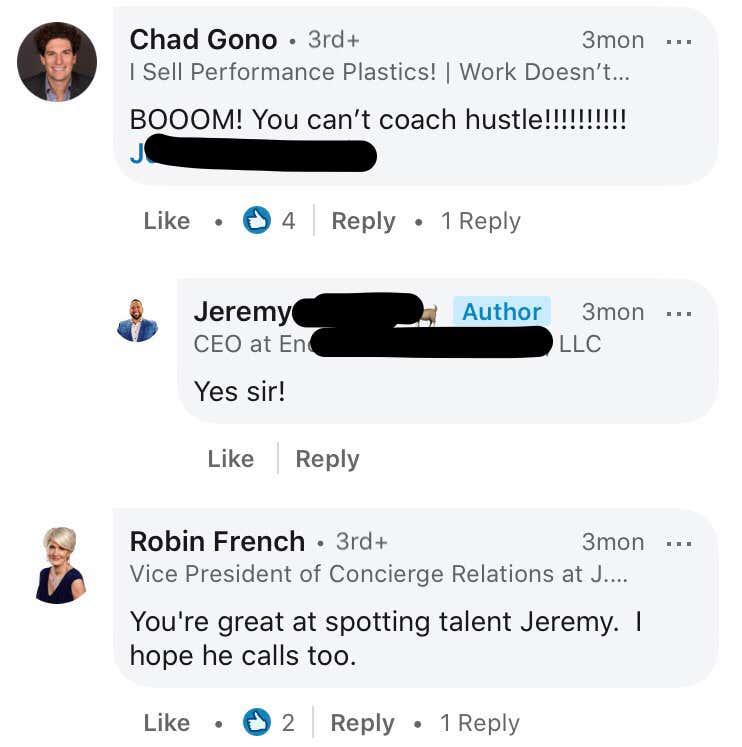 Robin French, which translates in Italian to “stealing the Mona Lisa,” hit the nail on the head with that comment. Giving a young, poverty-stricken boy your business card is a tell-tale sign that you’re great at spotting talent. 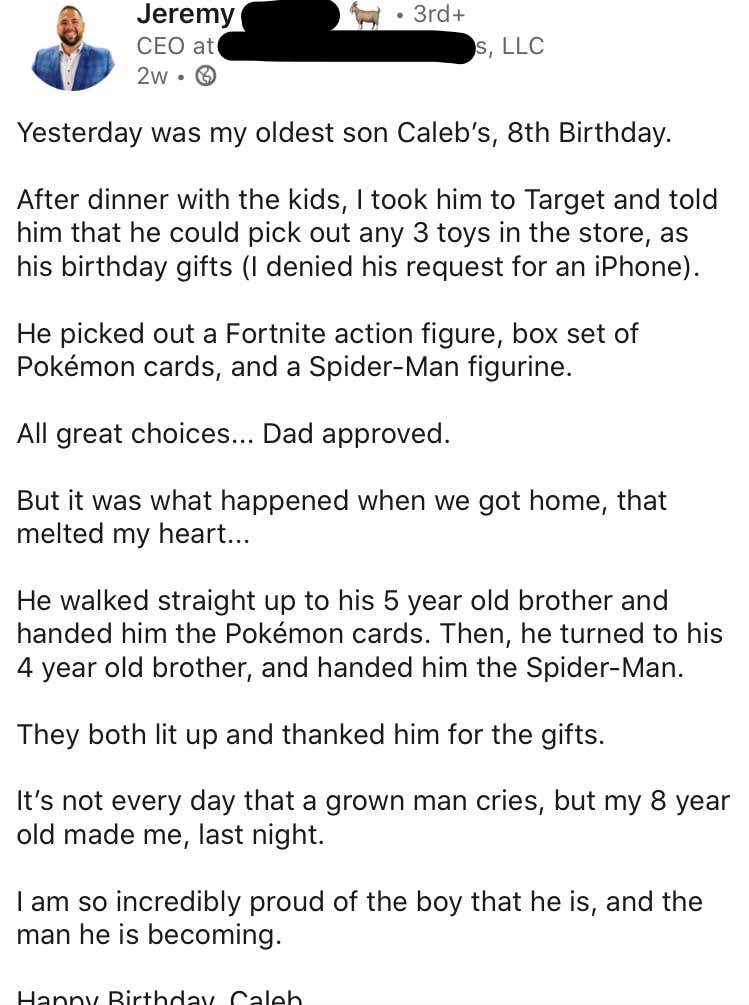 Never mind the fact that he probably moans his own name during sex like he’s covering a Pearl Jam song, Jeremy is an admirable CEO, goat, and most importantly, a father. He's the Eddie Vedder of LinkedIn and the God of parenthood. 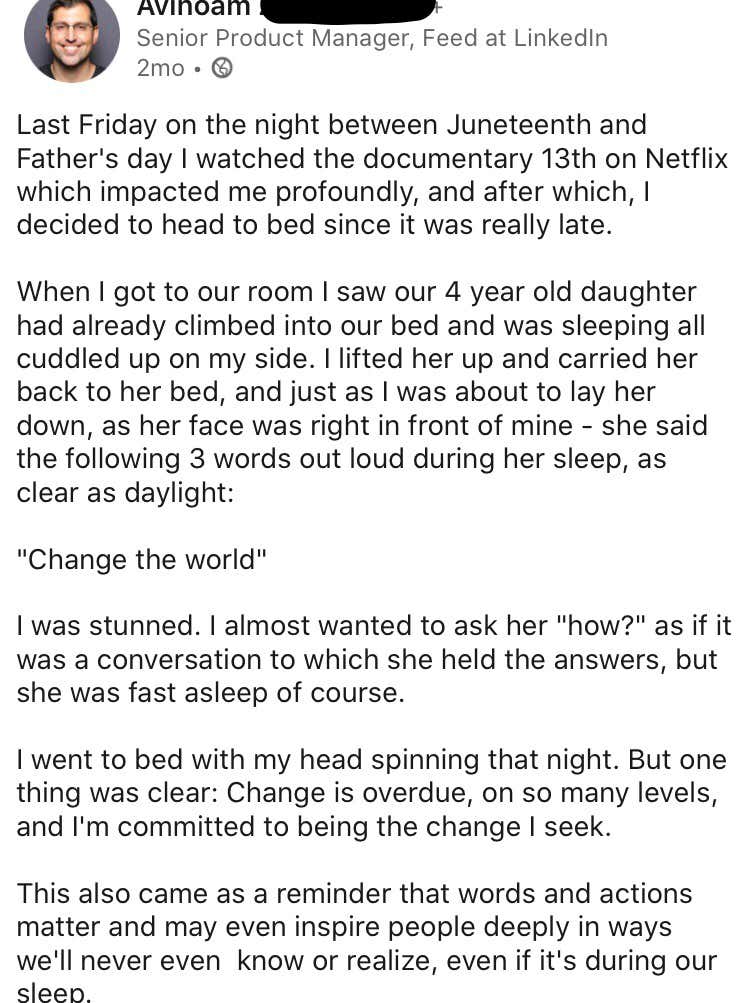 Tune in next week as I cover the man above, and be sure to follow @BestofLinkedin for more homages to the greats.