I've said this before but at its core, hockey is basically just organized violence on ice. You've got all these physical specimens throwing on some body armor to battle each other on a sheet of ice while wearing razor sharp blades attached to their feet and carrying spears with one curved end in their hands. They fight, they bleed, and it all comes down to whoever is the last team standing at the end of it all. So when you're dealing with a sport that is naturally so fast and physical, sometimes the violence can get out of hand. Which is why you have referees out there to officiate the game. To make sure that when a line is crossed, that team or player is penalized so severely that they never want to commit the same penalty again.

Over the years there have been certain plays that you'd think the NHL would attempt to really crack down on. Certain plays that are so dangerous that it's only a matter of time before somebody gets seriously injured to a point beyond repair. Like, take hitting an opposing player into the boards from behind for example.

Luckily Ivan Provorov is pretty strong on his feet there. Because if the angles of this hit were just slightly different, well I think we all know what worst case scenario would be here. So maybe the NHL should really crack down on players getting drilled directly in the numbers into the boards. But turns out there's something worse out there for them to focus on first.

Could it be greasy hits to the head?

The NHL has been trying and trying over the years to get head shots out of the game. But this league is also dumb as fuck and the only way to really get a suspension nowadays is if there's an injury on the play. If someone really gets hurt, then you're really fucked. But basically what that does is just penalize tougher players. Because if a player doesn't appear to get hurt on a hit to the head like this, then rarely is a penalty even called in the first place. You've got scumbags like Tom Wilson running around seeing a guys head exposed and his immediate instinct is "oh I better light this guy the fuck up real quick and rattle that brain around his skull". And if nobody is seriously injured on the play, then play just carries on.

So clearly there has to be something more dangerous and more violent in the game that the NHL is trying to get rid. Because clearly something is taking priority over hits from behind and hits to the head. And last night we finally figured out what it was. 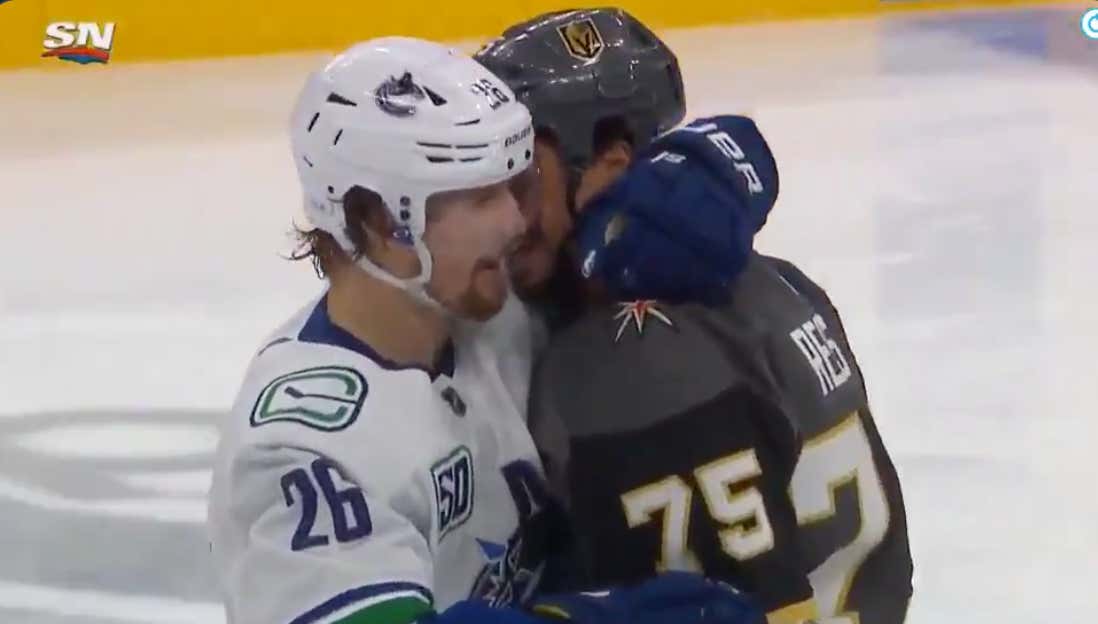 All I want to say right now is thank god. I mean it's only a matter of time before somebody dies out there. And the blood would be all over the league's hands if they didn't step in and do something about all these goddamn hugs going on out there. I mean could you imagine what would have happened if the refs didn't intervene here? How much longer would that hug go on for? A few seconds? A couple minutes? A year? A lifetime? We'll honestly never know. But fortunately the refs did their job here and they hit Roussel with a 10-minute misconduct to make sure he never does that again.

That's what the refs are there for. To police the game and make sure that all is fair in love and hockey. It's fast, it's violent, hugs like this are bound to happen at some point. But thankfully we have refs out there to make sure it's as infrequently as possible after hitting Roussel with a 10-minute misconduct for sensually embracing his opponent. Those guys never get the credit they deserve.