Madden 21’s pre-order is available tomorrow, so I figured I’d lend my years of experience in Franchise Mode offer up some tips for drafting the perfect team. A little background: I’d been playing Madden religiously from 2000 (the one with just John Madden on the cover) until 2014 when I retired from playing. From 2008 - 2013 I would take two PTO days from work the day the game came out and player 12+ hours on those days to get caught up on any new features. In college (2004 – 2008) and played conservatively ~30 hours of Madden a week and was regarded as one of the top players amongst anyone I knew. I had a group in college that would play a lot and we started some leagues post-college where we’d draft players in a franchise with 32 teams (more on that later). One of my favorite things to do would be to download the Madden Player Ratings and look for good value plays with maybe not the best overall number, but had traits I could mold based on my playing style. So that’s what I’m going to do in this blog, give you the ideal way to build your Franchise team in Madden 21. I'll break down where to spend your premium draft capital and early round picks and also show you where you can get some value later in the draft. But before we start:

A few general tips before we get into specific positions:

As I stated above, the key to Madden is stopping the run and running the ball. On offense, you’re in full control of whoever has the ball, so that outcome is completely on you. If you’re good enough, try to load up with more playmakers on defense, as that is the more unpredictable side of the ball. I like to spend premium picks on Defensive Tackles because they are the closest to the Quarterback and can affect runs the most, even if they don’t put up sexy stats. With this position I focus on Strength and Block Shedding. Any pass rush moves are bonus.

Steven Cheah historical - My favorite player to draft to start every Franchise - Ravens DT Haloti Ngata. 1st rounder virtually every time back in my day.

In addition to stopping the run, we need to get after the Quarterack. So with this position I’m looking at get-off, so I am valuing Acceleration, Speed, and Finesse Moves. Power Moves are nice, but how often are you running completely over an Offensive Tackle AND making a sack on the same play? There is some good value here, but it’s also a good place to spend some premium picks. Let’s start with:

We’re building a track team here. We want guys that can run (Speed). After that we’ll prioritize Tackle to ensure we can stop the run and Awareness because we’ll want to be in position to make those tackles. Hopefully by drafting some big Defensive Tackles, Block Shedding’s importance can be minimized and these guys can be kept clean.

Steven Cheah historical - I would usually control the Linebacker. My move was the jam the opposing Tight End and neutralize him from the play. If I did that, then there would be 6-7 defenders to cover 3-4 eligible receivers, which are numbers I can live with.

I was pretty heavy with man coverage when I was on the sticks. I’d certainly use come Cover 2 or Cover 3 on 3rd downs and to mix in early, but was primarily Cover 1 where all my Corners were manned up. So I’m valuing Man Coverage and Awareness. This is another position you’re going to want to spend some premium picks on.

The last line of defense. But they’re also able to cause a ton of problems playing against a live opponent or CPU. You can roam them around and be non-traditional, but they also can make a ton of plays if you play your cards right. They way Madden 21’s player ratings shake out, you’re going to want to spend some premium picks in this area. I focus on Awareness (which is heavily tied to Overall rating) and Speed as the main factor with Tackle and Zone Coverage the other two keys.

Steven Cheah historical - Very good Madden players can be extremely effective controlling Safeties. In my most glorious win, it was a Super Bowl in an online Franchise league with 31 other players. I had given up a disheartening late drive and was down by 4 with :29 seconds to go and one timeout. My opponent controlled the Safety and did it well. I ran a Hail Mary out of a 1x3 formation and when I saw him move the Safety very slightly over to the right (towards the overloaded side), I knew I'd likely have a 1-on-1 to my 4th Receiver, Leonard Hankerson. Hankerson was a speedy Receiver, so he could get on top of a Corner. Lucky for me that's exactly what he did and I hit him for 75 yards on the second play of the drive. Essentially a walk-off, season ending win. Incredible. Here is a photo from I took on my phone from after the game: 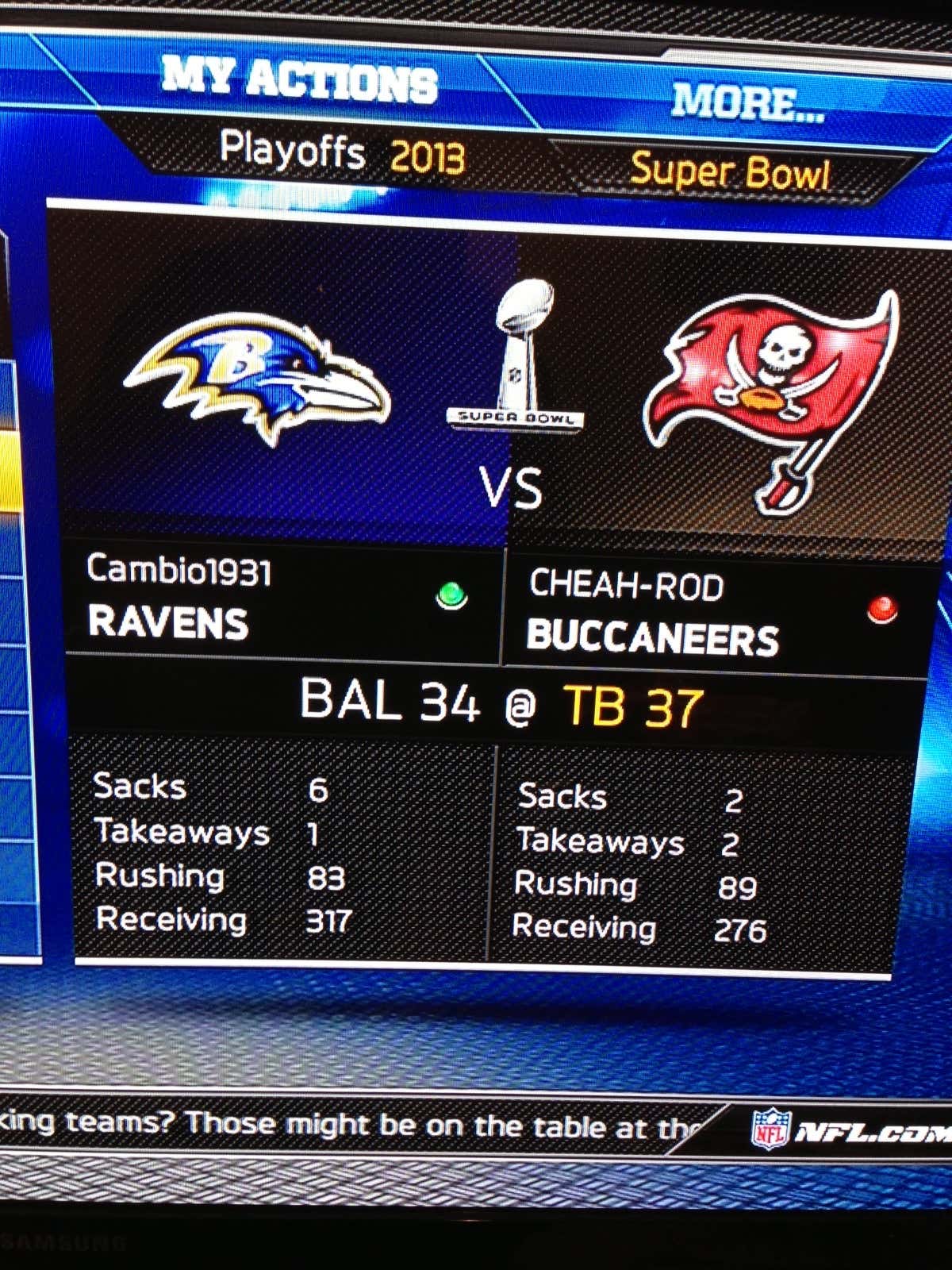 These guys will keep your Quarterback healthy so you don’t have to go to your backup. I do like to run off tackle, but we keep it simple and just focus on Pass Block here. Not Finesse Block or Power Block, but just Pass Block. It makes it harder to find value, but some do stand out like:

We need some powerful dudes here. We’re going to get a majority of our rushing yards off of these hog mollies, so let’s prioritize Run Block here. They shouldn’t be a major priority when drafting as you can get good value in the later rounds

We’re looking for smart players with good Awareness and ability to Pass Blocking. We need guys that can figure out who to double and pick up delayed blitzers. We also prioritize Run Blocking as on 3rd & Short we’re not running it outside, we’re going right up the gut!

George Kittle is a perfect Tight End, but he’s a 98 Overall and there ain’t no way I’m paying top dollar for a Tight End in Madden! But I can show you how to get a cheaper version of Kittle for pennies on the dollar that can likely produce similar results. In this position I value speed a lot. We need our Tight Ends blazing by Linebackers. I also throw to the Tight End on the money down and when I need a conversion on 3rd or 4th & short, so Catching and Catch In Traffic are both important there. If they can do anything Run Blocking, that’s a positive. Pass Blocking? Doesn’t matter. If you’re using your Tight End to Pass Block, you’re doing it wrong!

We need speed backs that can get the corner on a toss sweep, but we’re also looking for good Carrying ratings as fumbles are completely unacceptable. Catching is also important as I like to split my backs out with some pre-snap motion, so they need to be a threat as a receiver.

Steven Cheah historical - In Madden 2005, I ran for 529 yards in a game at Green Bay on Monday Night Football. It was with Titans RB Chris Brown. I believe it was on 31 carries give or take one or two. It's certainly not 529 yards, but I do have this picture on my phone from breaking the rushing record with Doug Martin on just 20 carries. If he had any real juice we could have challenged my personal record with Brown in that game. 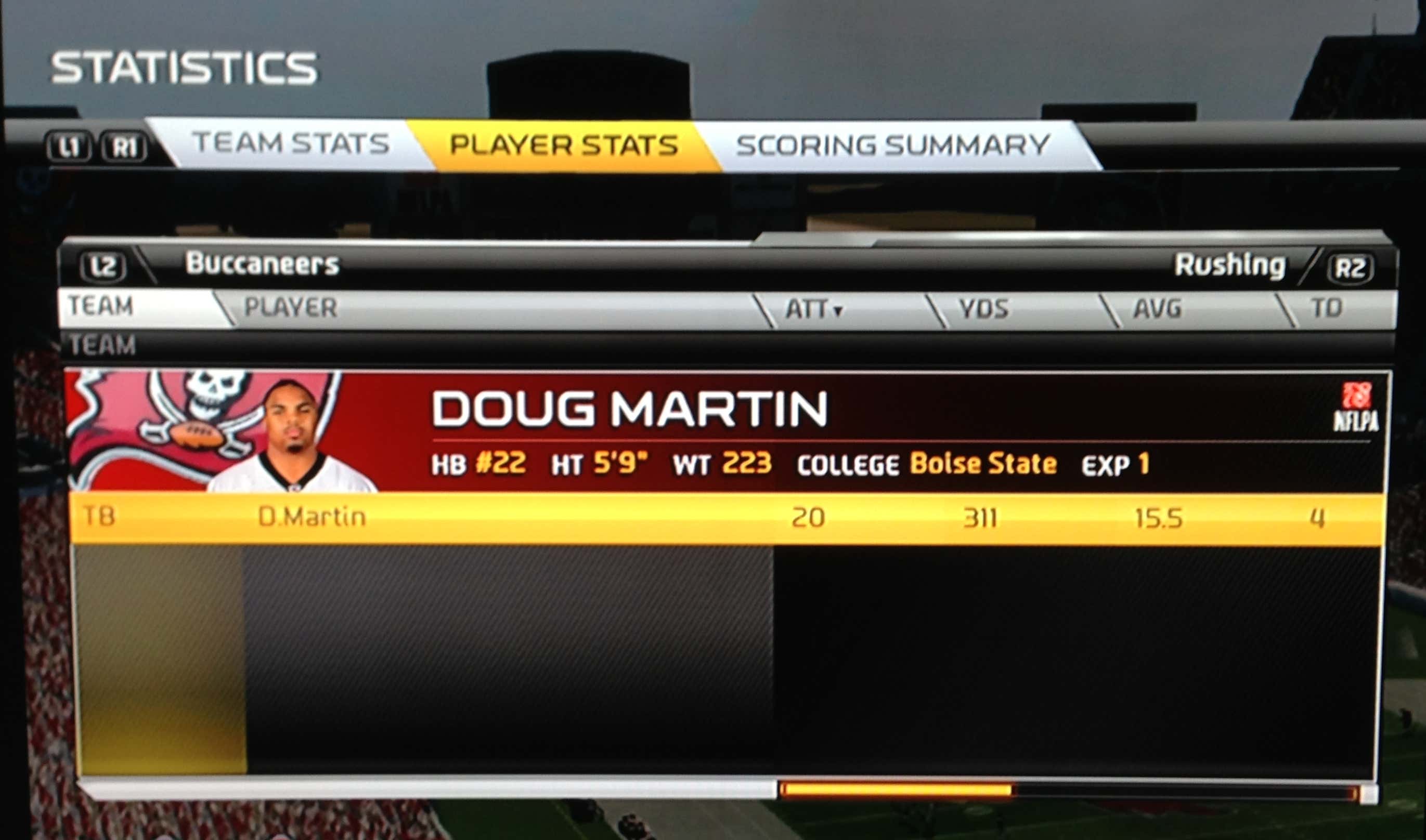 Now you want this to be an eclectic group. You don’t want all of one type of receiver. If you have all Speed Receivers, everyone will uncover at the same pace and you’ll have less time to make decisions. I like to focus on some distinct field stretching Speed Receivers and some more reliable, underneath Receivers with good Catching and Catch In Traffic ability. I’ll highlight who I like where:

The premium position in all of sports. Certainly this will be worthy of a 1st round pick? Wrong. Let other players use their high picks on a QB. You’ll definitely need a good one or two, but there are areas to capitalize on. I always valued Throw Power. The instant you take the snap, you’ve got a ticking clock to get rid of that ball. I personally want a guy who can load up and uncork one really quick to put it on his Receiver. I also value Throw Accuracy Short, Throw Accuracy Mid, and Throw Accuracy Deep in that order. Throw On The Run is a nice to have too for when you’re escaping and Speed is also an added bonus. Any QB who can run is a big plus.

Steven Cheah historical - My favorite Madden QB ever actual was a Premium pick in his day, Titans (and later Ravens) QB Steve McNair.

Same deal, find a guy with great Kick Power. Practice and get good at accuracy.

Steven Cheah historical - Not sure this will ever be broken, but I once had a 97 NET yard punt. Punting from my own 2 yard line at Denver on a rainy day, I directionally kicked it and it rolled all the way to the 1 yard line where I giddily downed it to the fanfare of nobody.

See you in the Super Bowl!

Thank you to anyone that made it all the way to the bottom of this journey and have fun to everyone playing Madden21!