***DOWNLOAD the PlayBarstool App right now! Free chance to win the Progressive Jackpot during every broadcast!***

Just less than two weeks into the Stool Streams era, we have a historic Progressive Jackpot on the line tomorrow afternoon. In our debut Cornhole broadcast, $1,000 is waiting for you if you can successfully go 6-for-6 on the PlayBarstool App. This comes after nobody ended up taking home last week's Jenga Jackpot, which sets up the stage for tomorrow's rollover.

Let's dive into tomorrow's lineup for one of the most popular tailgate games out there:

History: None in Cornhole, but Big Cat prevailed in a 2v2 Jenga match last Wednesday.

Storylines to Know: This is the second time in as many weeks that Big Cat and Tommy Smokes will face off inside the Triple S. In case you missed it, here is that marathon in its entirety:

Big Cat made Tommy make some weird noises in that one, and we can only imagine what is up his sleeve for tomorrow. Tommy calls this rivalry with Mr. Cat an "Uncle-Nephew relationship," so expect the trash talk to pick up right where it left off.

Quotes to Remember:  "I'm not going to trash talk Tommy whatsoever. After making him orgasm during Jenga, our relationship is forever changed. I must protect him now."

"Once I'm seeing the board and see how the board is slipping and sliding, it's game over. Nobody locks in like Tommy Smokes." - Tommy Smokes

Analysis: The banter throughout this match will be nothing short of electric. As for the game itself, Tommy Smokes told me that he gets a lot of Cornholes when he plays. We'll see if he can back that talk up tomorrow. Expect an aggressive strategy from Big Cat as well, similar to his Jenga style. 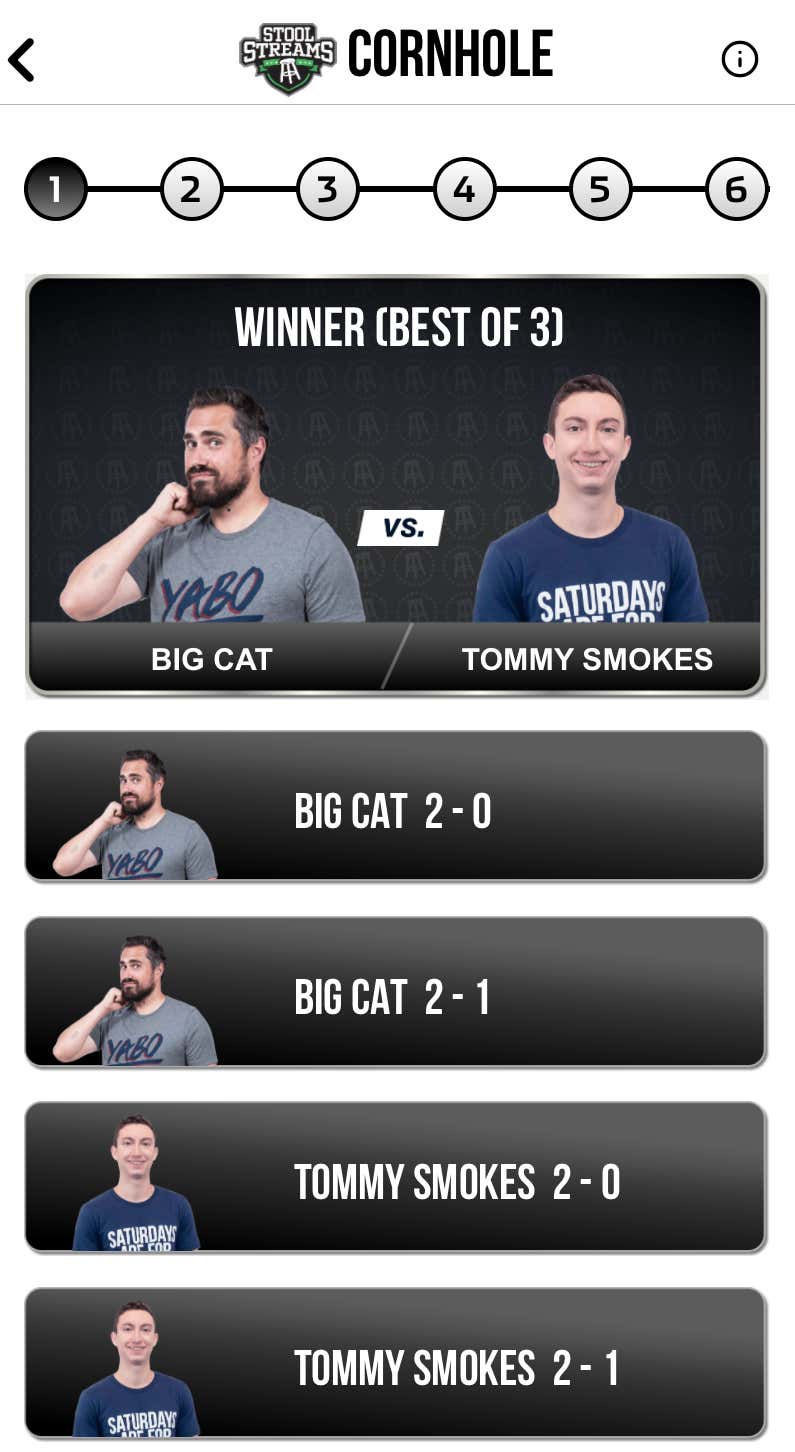 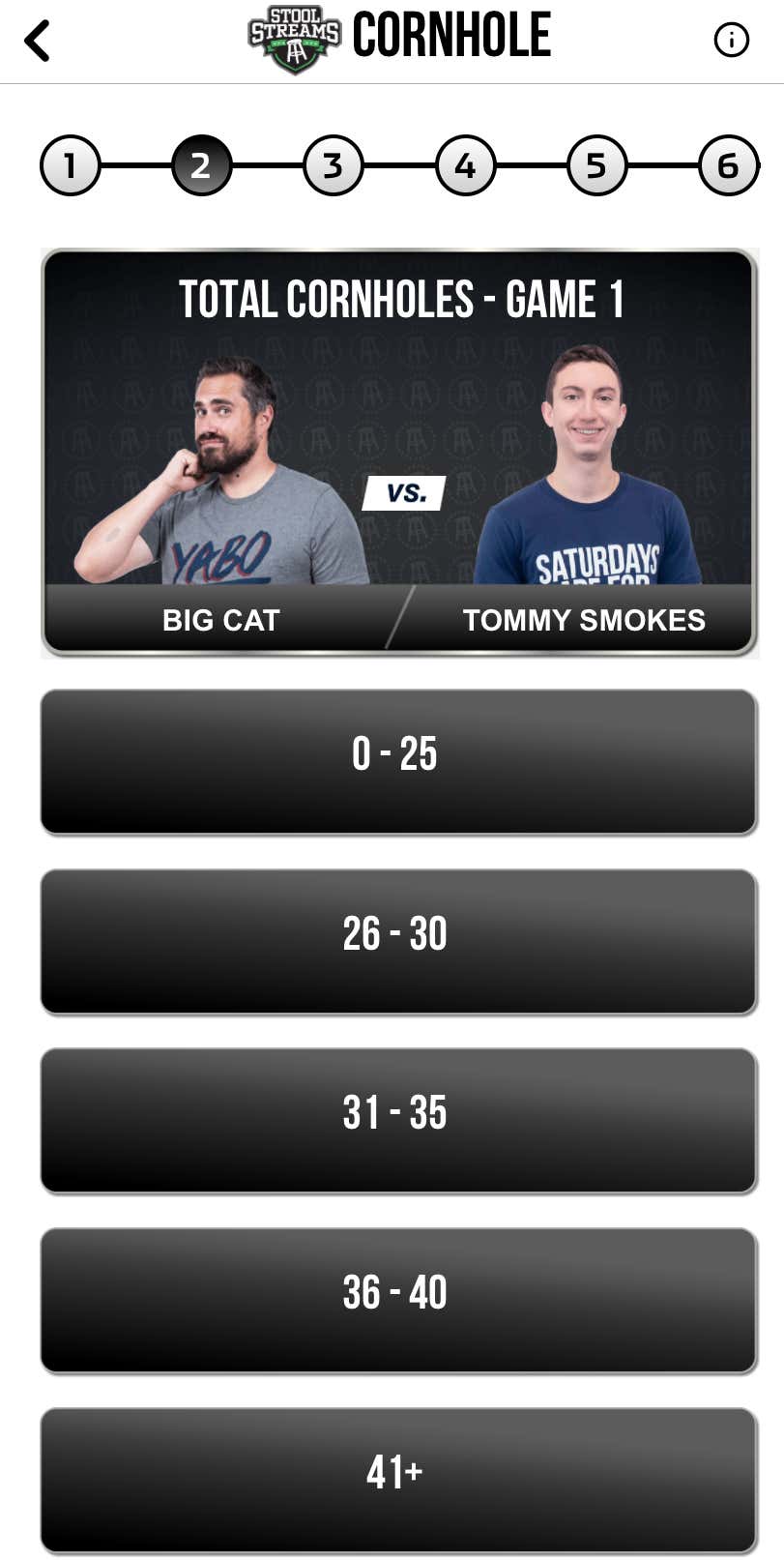 Storylines to Know: This will be the first ever All-Female match in the short history of Stool Streams. Bright lights Trysta, Kayce expericne...

Quotes to Remember: "I've played a lot of Cornhole in my life, growing up in the South, but I stink at it. [The reason is] From drinking too much." - Kayce 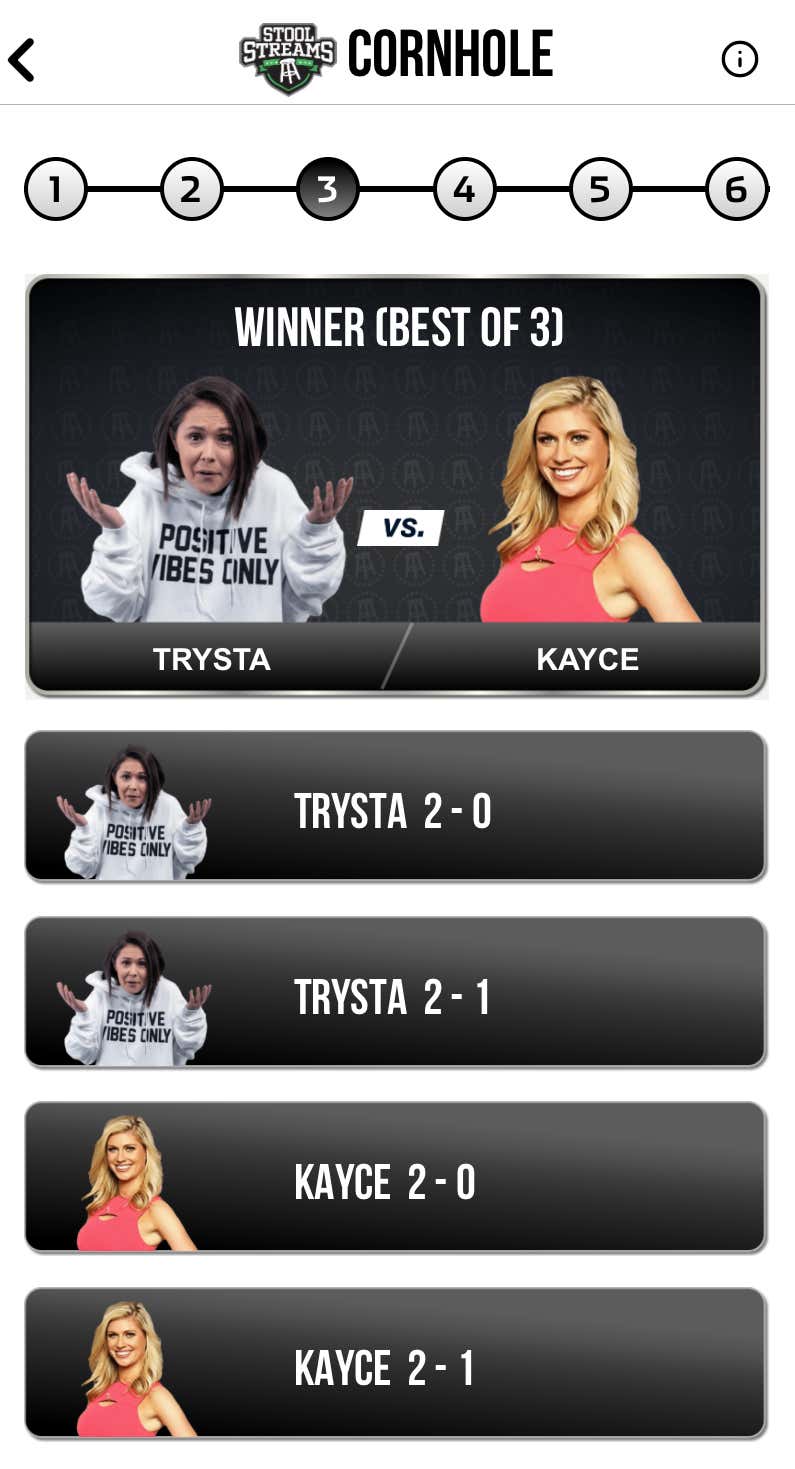 Storylines to Know: PFT Commenter has a chance to make history tomorrow inside the Triple S, as he could be the first ever player to complete the Triple Crown. He already has wins in Jenga and Table Tennis, but he will put his perfect record on the line tomorrow against Nate, a fellow employee from the DMV area.

"I don't think any skills come into play like Jenga, except 'eye-hand' coordination." - Nate (Note - Nate was confident in his "eye-hand" coordination even though I corrected him when the term is "hand-eye.")

Analysis: We are calling this one "The Battle of the DMV." PFT and Nate are both from the same region of the United States, but tomorrow, they are foes. Nate's Jenga win last week came with some controversy, while PFT faces enormous pressure as he aims for the Triple Crown. 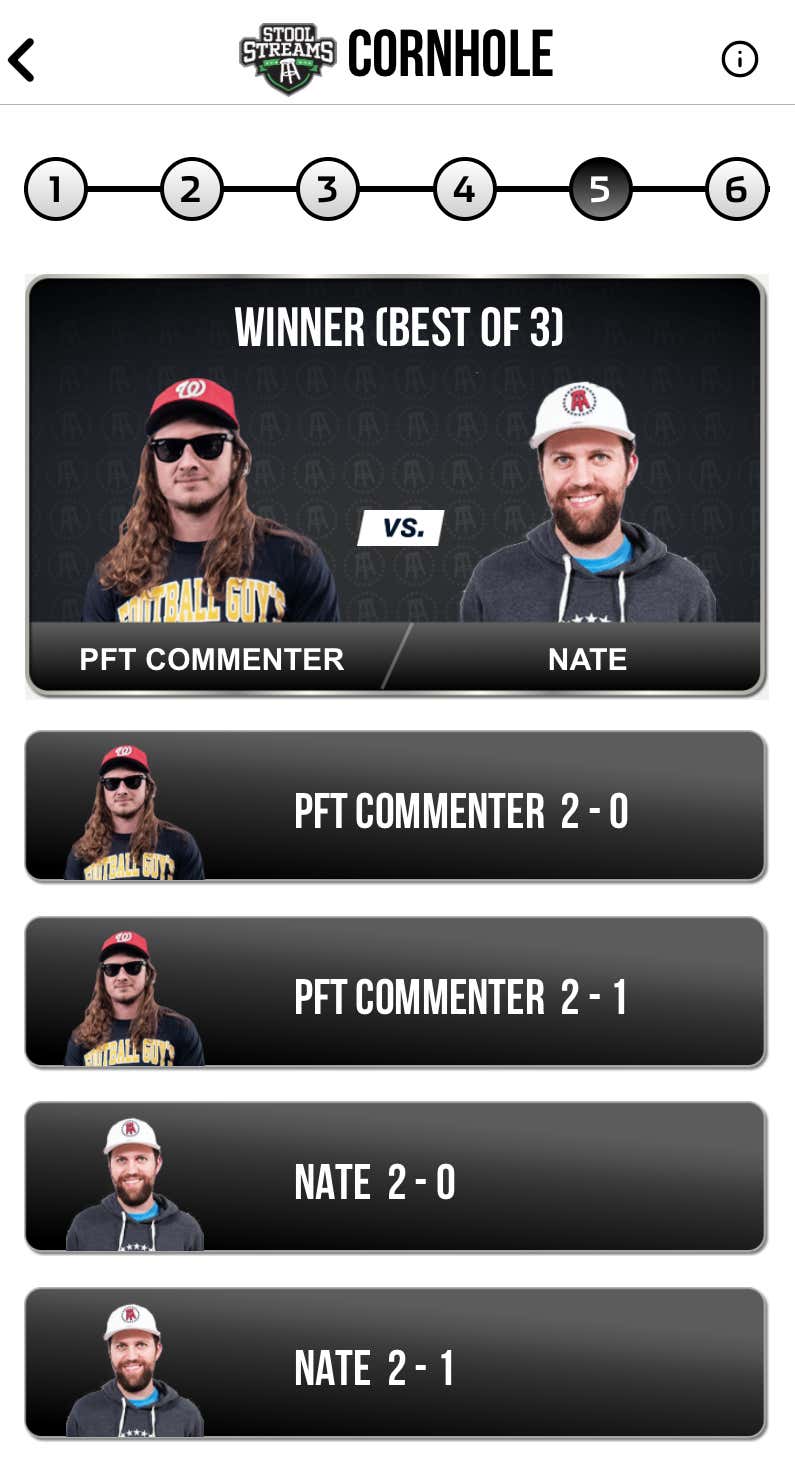 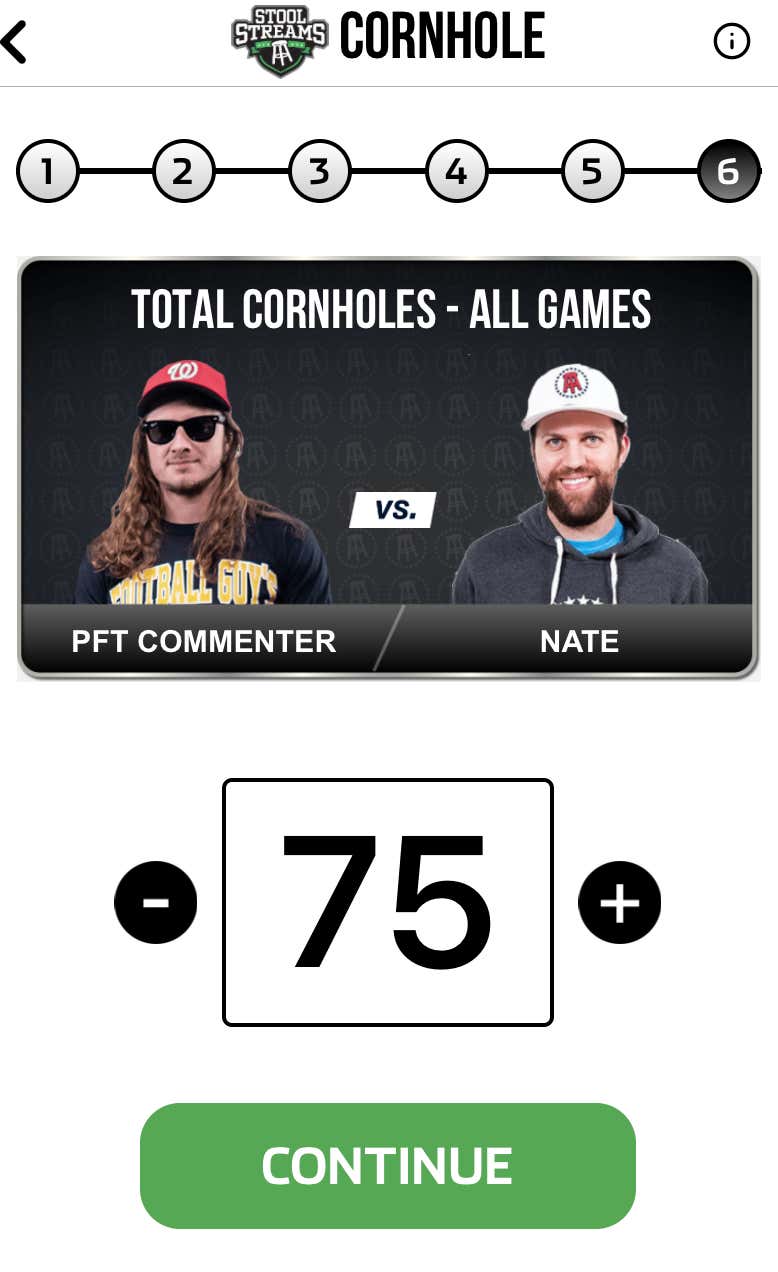 Let us know if you have any questions. The test Cornhole broadcasts we have done have been a lot of fun and looking forward to tomorrow's matches (2:30 PM ET start time).