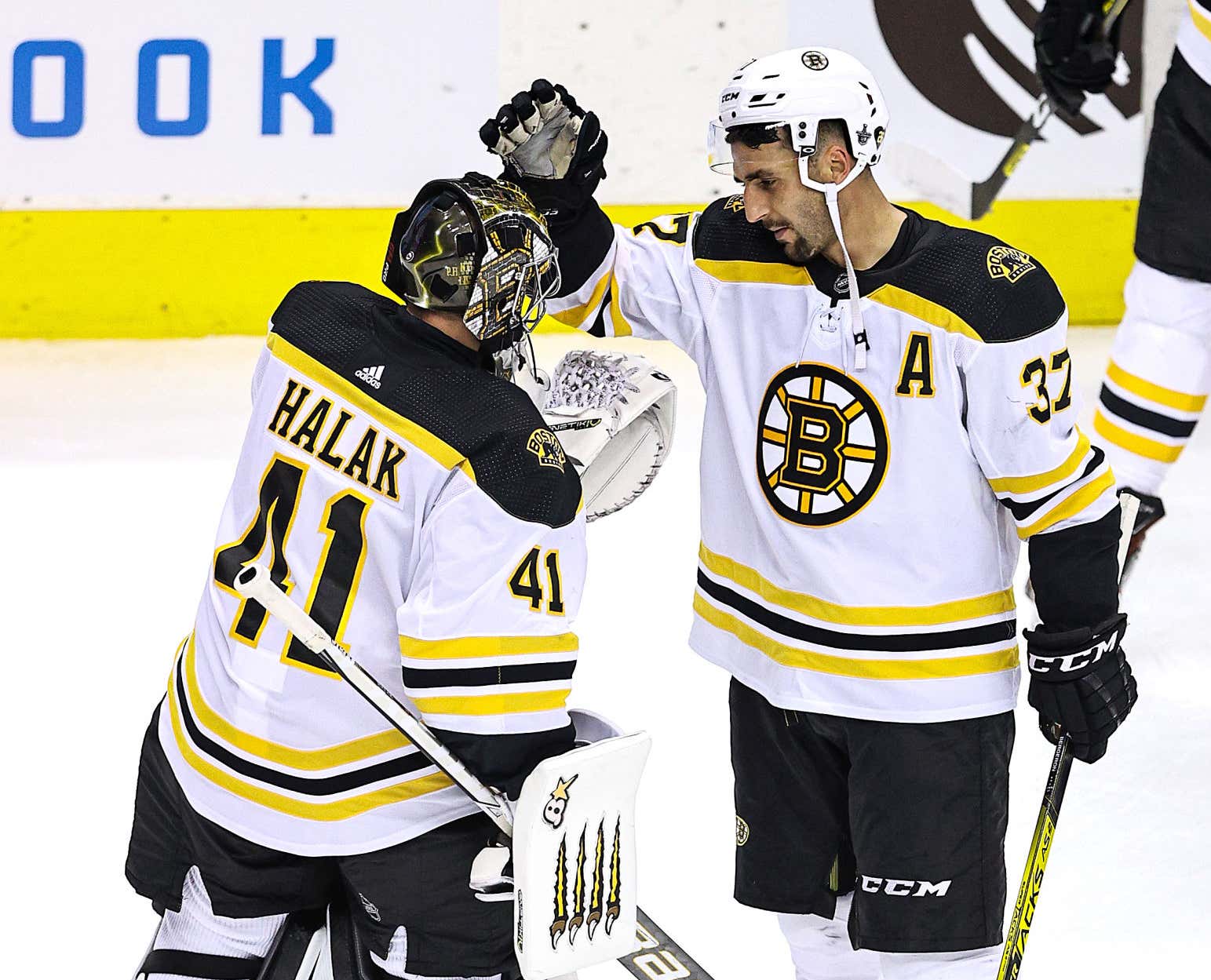 So far, so good. The B's jumped out to a 3-0 lead against the Tampa Bay Lightning and held on to take Game 1 with a 3-2 win. Victor Hedman single handedly got the Lightning back in the game with 2 goals in the 3rd but Jaro Halak shut the door with 35 saves and is now 4-0 this postseason. Let's get into it.

Charlie Coyle opened the scoring late in the 1st with an unreal tip. Hands fuckin' team. Brad Marchand made it all happen. 1-0 Bruins. Both teams exchanged ticky tack penalties but no dice on either man advantage.

Anders Bjork drew a tripping penalty on Victor Hedman and David Krejci found David Pastrnak on the PP. 2-0 Bruins. What a play.

The Lightning failed to score on their 2nd man advantage of the game but started to tilt the ice half way through the 2nd. B's were getting outshot by a sizable difference as Tampa started to generate some chances. The Bolts thought they had cut the lead in half but Tyler Johnson was whistled for a high stick. Good call, stripes. Both goaltenders with some huge saves to keep the game at 2-0. Jaro Halak, especially with a monster 18 save period. B's got a little too cute.

With 11:10 left in the 3rd Victor Hedman got the Lightning on the board. Went off McAvoy and in. 3-1 Bruins.

With 1:14 left and the goalie pulled Victor Hedman cut the lead to 1. Went off McAvoy once again. 3-2 Bruins.

T's and p's if you had the Bruins puck line, they missed a million empty nets. Game 1 goes to the Bruins, 3-2.

- Charlie Coyle Baseball Goals Only. Man what a tip. Just unreal hand eye coordination. His 3rd goal of the playoffs. Even better set up from Brad Marchand to Brandon Carlo. Thought Marchand was gonna lose the puck a hundred times on that play but managed to slip the pass through to the point.

- 2 point night for Brad Marchand (1G, 1A), and the game winner. David Pastrnak had a goal and an assist himself. Patrice Bergeron with an apple. Not a bad night for the top line to say the least. The eventual game winner from Marchand was the top line at its best, turning defense into offense. Hell of a game from 63. Gonna need more of that as the series wages on. Best line on the ice by far.

- The B's PP continues to be lethal, I said before the game that special teams is going to be huge in this series. Smartest thing Bruce Cassidy has done has been putting David Krejci on PP1. That pass to David Pastrnak… sheesh. Threading the needle indeed. Playoff Krech. Love to see David Pastrnak get on the board as well.

- Second smartest decision Bruce Cassidy has made has been inserting Connor Clifton into the lineup. He's been a one man wrecking ball.

- The 4th line of Nordstrom-Kuraly-Wagner were banging bodies early. Thought they played well, certainly annoyed the Bolts top guys. Nordstrom eats pucks like you read about. They'll need to ice up and they'll be going right back at it on Tuesday.

- Tampa started to push back in the 2nd but Jaro Halak was up to the challenge. Give Tampa credit for not rolling over. They fought till the end. Victor Hedman… pretty fucking good. 2 goals and single handedly brought the Lightning back in the game.

- Ondrej Kase once again had a few grade A chances but couldn't convert. He is so fucking due. Had a breakaway opportunity but couldn't lift the puck past Vasilevskiy.

- Jaro Halak was locked in tonight. When Tampa started to push back in the 2nd he had 2, 3, 4 solid saves to stifle them. Had 18 saves alone in the 2nd. Both goals that went in went off McAvoy. Could he have the first one? Sure. But with games 2 and 3 being a back to back it was crucial for him to get off to a good start. Rock solid.

Jaro finished his night with 35 saves on 37 shots.

ps the B's announcing Vladar's deal in the 1st intermission is just laugh out loud funny. 3 year deal for Darth Vladar, first 2 years are two way, last year of his deal is a one way.

An absolutely physical game to say the least, felt like there was a scrum after every whistle. Tampa came back late in the game, but we'll take the win. B's are back at it Tuesday night for Game 2. Man is this going to be a fun series.