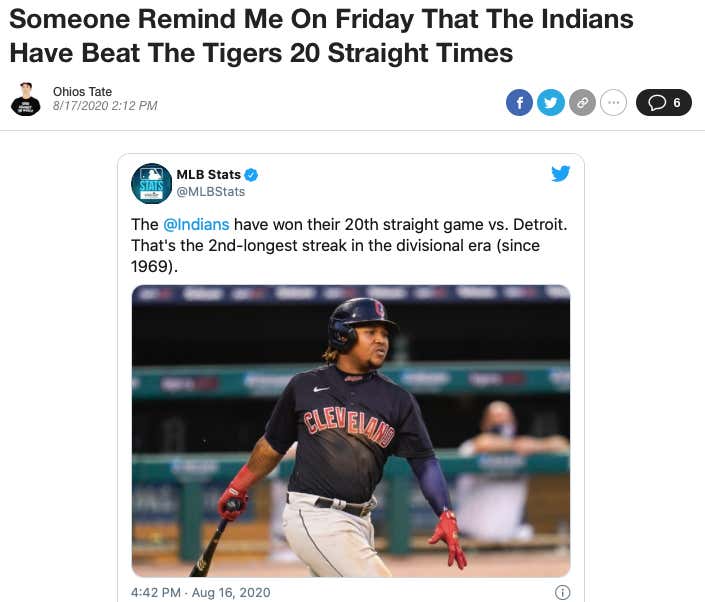 So I know I blogged this on Monday, but it completely slipped my mind this morning when I woke up. Thank you to the local weather siren testing system for going off at noon and reminding me that today is in fact Friday. And due to the fact that the Indians play the Tigers tonight, I think that makes this a Free Money Friday.

They say the only things in life that are certain are death and taxes, but with the idea floating around of a payroll tax, I think we can substitute in the Indians beating the Tigers for the other guarantee. I mean, they've beaten them TWENTY straight times.

And that brings us to tonight. To not bet on the Tribe tonight is simply saying that you don't like money. There's nothing wrong with that, but if you are one of the few that enjoying having more zeroes in your bank account, I highly suggest you lay some coin down on Cleveland tonight. I don't even care what the line is. We're talking 20 straight wins, folks. Take the moneyline.

-178 isn't the best line in the world, but it certainly isn't the worst. How does a team that's won 20 straight games against the other not get at least a -200? I think the oddsmakers in Vegas might've left early on this beautiful Friday afternoon, and they left the interns to make these odds. I don't care that there's not fans in the stands, the Tribe are still at home. That matters less this year, but it still matter. We're going up against a chump with a 7.56 ERA, and while Plutko may have started the season in the bullpen, I still think we have the edge in pitching here.

**To be clear, if this bet loses, do not blame me. I accept full credit if it wins, no blame if it loses. That blame needs to be directing to Mike Clevinger and Zach Plesac, one of whom would be starting tonight had they not gone out on the town while in Chicago and single handedly put their teammates lives at risk.

Anyways, the Tribe have won 6 straight as a team, 20 straight vs the Tigers, and they're at home with the edge in starting pitching. How don't you sprinkle on the moneyline? I know Friday is payday for most of us, but even if it's not your day of the month, make it that way. Some people make $40,000 a year. Some people $80,000. And some people can take the Indians tonight and choose their own salary.