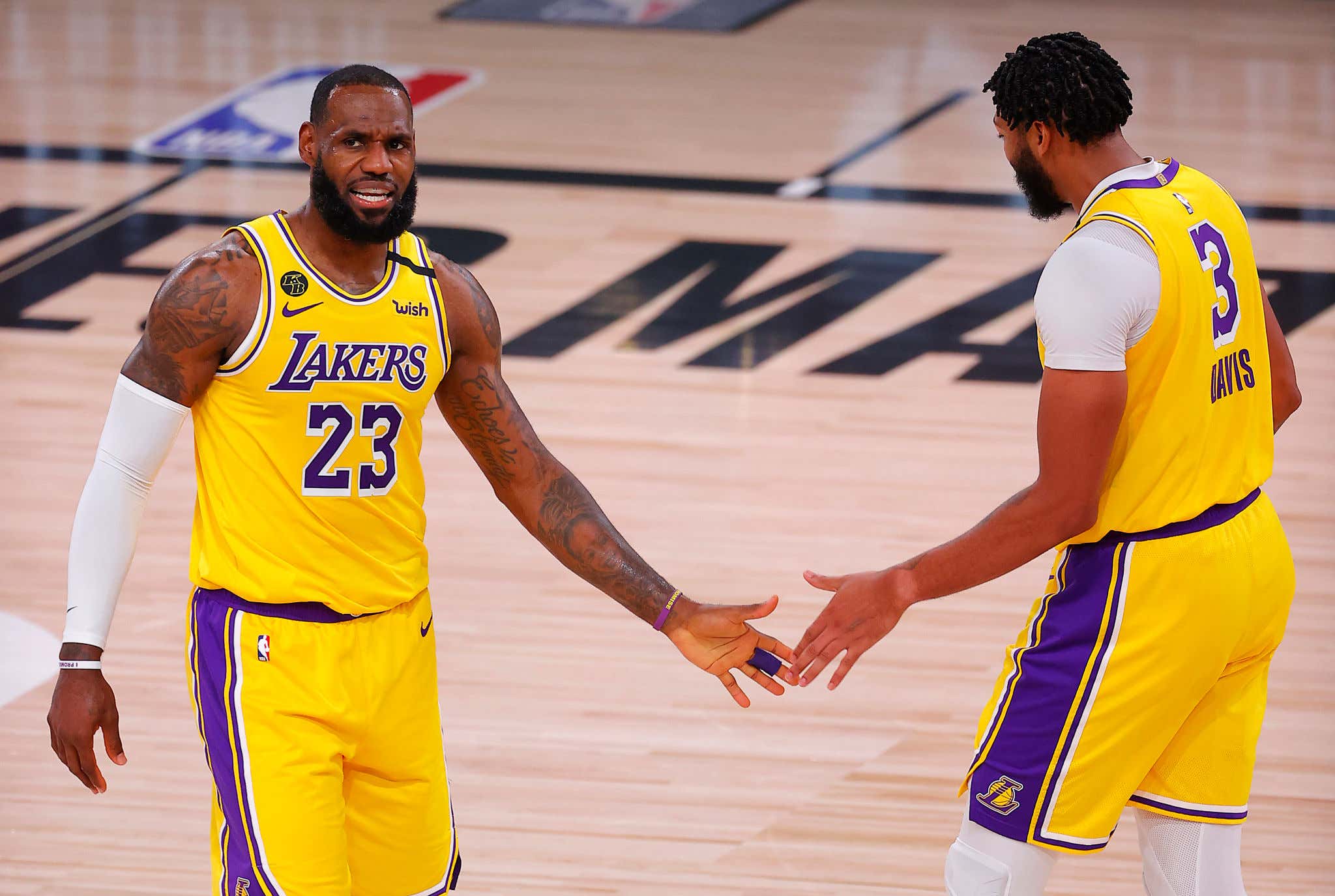 Good morning everybody happy Friday and welcome back to another edition of Last Night In The NBA where we bring you up to speed on everything that went down form the night before in the Association. Thursday night was our second slate of Game 2s, and just like the first night the theme of the night was blowouts. Only one of the four was relatively close and even that one had a 16 point lead at one point. I certainly hope all theses recent blowouts aren't going to become a trend, mainly because I've become addicted to the bubble drama. But on a night where the title favorites had to reassert themselves, you knew a night like this was coming. As always, if you somehow didn't get to see the action, here's what happened.

I don't want to be a prisoner of the moment, but this series might be over. The Heat look phenomenal and there's really no other way to say it. Everything is clicking for them at the right time, and maybe part of that is the Pacers are just not even close to the same level, but let's not discredit what the Heat are doing. They've looked great pretty much since they arrived in the bubble. What has made them so dangerous is not just the production from Jimmy Butler

You knew he was going to show up in the playoffs, it's what he does. What takes this team over the top is their shooting. It has been incredible and Game 2 was no different. Another 47/51% performance with 18 3PM, I'm not sure the Pacers have anything close to an answer for what the Heat are doing. After a rough Game 1 you knew Duncan Robinson was going to get back to normal and that's exactly what happened. He made 7/8 threes in his 25 minutes

Then you have Goran Dragic, a player that destroyed the Pacers in the fourth quarter of Game 1 come out and drop a very efficient 20/6 in his 31 minutes

Bam and Jimmy Butler combined to go just 8-20 for 25 points and the Heat were never really threatened. They even missed 9 FTs! I know we're only half way through, but I think we can all start preparing for MIL/MIA in Round 2.

For IND, the good news was that Oladipo was able to play and came out and dropped 22

the problem was it didn't matter whatsoever.  He and Brogdon weren't all that efficient, they didn't get much from their bench, and this is a team that just doesn't have the firepower to hang with the Heat right now. Even with Myles Turner bouncing back and finidhing with 17/8 on 7-8 shooting, once this game got to the second quarter it was pretty much a wrap. I don't want to pick on Pacers fans or anything, but they are on the verge of being swept in back to back first rounds. That's rough. Jimmy Butler has made TJ Warren crash back down to earth which is a problem. He was going to have to maintain his early bubble level if the Pacers wanted a chance, and that has not happened.

Sadly, I sneaky feel the same was about the Thunder as I do about the Pacers. Game 2 was their chance to punch back and even things up, another game without Westbrook, Lu Dort was back, hell, James Harden even had an "off" game. The result? Beat down city. Once again they were taken down by math. Fucking math man, what an asshole that can be. The Rockets made 20 threes in Game 1, and another 19 3PM last night. Compare that to just the 11 of the Thunder and this is what happens. The Rockets started the game shooting 50% from three before missing 15 straight and the Thunder STILL couldn't recover. What is their plan for when Harden doesn't struggle and Westbrook actually comes back?

The most shocking part of the Rockets in this series isn't the fact that they are up 2-0. It's what they are getting from Jeff Green. So many fanbases around the league right now are bullshit because this is the version of Jeff Green they wanted for their team when he was on it. He's been so damn solid off the Rockets bench

It's also pretty impressive how this team has been able to defend so far in the series, especially without Westbrook. I think even Rockets fans would admit the level of defense we're seeing is a pleasant surprise. Mostly because we didn't see it all season long.

For OKC, their guard trio showed up, SGA had one of the best games of the day

but it's still not enough. Not when this team is only going to make 11 3PM. You have to do one of two things. Either catch the Rockets on an off night, or match them in threes. That's pretty much OKC's only hope. The Thunder are one of the best defensive teams in the league and you'd never know it. Steven Adams is a true non factor, he was a -26 on the night which seems bad until you see that Chris Paul was a -36. Woof.

If I'm the Rockets I take this 2-0 lead and I decide to be even more cautious with Westbrook. Let him recover. Imagine winning this series with him not playing at all? I don't know how that wouldn't make the Rockets one of the more feared teams in the West.

Poor Magic. Things were so positive after Game 1. They shocked the world. In Game 2 it was the same old story unfortunately. They love winning Game 1s and then completely pooping their pants in the next game. It's remarkable. You come out and shoot 12/9% in the first quarter against the Bucks, the game is over. Can't start off scoring just 13 points in the first quarter, that's an issue that should be avoided next time out. There really isn't much to show outside of Vucevic once again dropping 30+

Their largest lead was 1 point, and when you finish with 34/21% and make about half as many threes as your opponent, well that's how you get blown out.

For MIL, they still don't look like the dominant MIL we saw all year, but they needed to right the ship and that's what they did. Giannis threw up a ridiculous 20/20/5

which was dominant, but he did also have 7 TOs. Then there's Khris Middlton. Boy does that guy stink right now. Brutal in Game 1, a stellar 1-8 performance in Game 2, remember this is supposed to be the second star next to Giannis and we're still waiting for him to show up in the playoffs. That's something to monitor.

which looked much more like the Lopez we saw all year. The bench was solid as well and we got the result I think many expected. If the Bucks win Game 3, this thing will be over in 5.

But I will say, how much of this was just the Magic unable to make a shot as opposed to the Bucks figuring things out? It's hard to say really.

Congratulations to LeBron James and the Lakers for finally winning their first playoff game since 2012. A heroic effort really when you consider there were no fans in the stands. His words, not mine. Unfortunately for the Blazers, they had the same issue as the Magic. They couldn't make a damn shot. On the night they finished with 40/27%, but it started in the first quarter. Only 19 points in that frame on 31/12%, the damage was done before you could even catch your breath. An off night for Dame and CJ (12-30) is pretty much the kiss of death

and then you add 17 TOs to the formula and that's how yo get blown the fuck out. It didn't help that Dame dislocated his finger, and at no point did the Blazers show they had an answer for Anthony Davis. The good news is this isn't a MIL/ORL situation. The Blazers actually have a chance. Well, what I mean is they have a chance if they no longer miss every shot they take. To be fair the Lakers had to deal with that shit in Game 1, now it was the Blazers turn.

For LAL, this was a beatdown right from the jump and honestly has Lakers and LeBron fans in a pickle. All year they wanted to discredit what AD does for this team in favor of LeBron's MVP campaign. Well….now what? You didn't win this game becuase of LeBron, he only had 10 points and went 4-11. You won this game because just like he has been all year, Anthony Davis was a MONSTER

Did Giannis have a teammate like this? I didn't think so. It didn't matter who the Blazers put in front of him, AD did whatever he damn well pleased. Killed them down low, stepped back and killed them from three, this is the type of dominant player Davis needs to be all the time. Not just when their backs are up against the wall.

The Lakers three point shooting issues didn't really factor in, they were 14-38 from three which is more along the lines of what they should be. It was a must win game for them and they rose to the challenge. It's why I think this series is going seven. My question is, do Lakers fans apologize to KCP after what they said to him after Game 1?

And that's it! You are now caught up with everything that went down yesterday in the NBA. We're back today with another full slate of Game 3s, so here's to hoping they are closer than what we got yesterday (outside of PHI/BOS…fuck The Process). Have a great Friday!