Hockey is a fast, physical, violent game. These guys are in peak physical shape, flying around out there with sharp ass blades of steel attached to their feet and carrying large carbon fiber sticks in their hands. Everything about the game is violent, and that obviously gets ratcheted up a few degrees in the playoffs. I'd imagine most teams start to really hate each other about 40 minutes into a series. Then you have to play those same guys again, and again, and again, possibly again, possibly again, and then possibly again one more time. You hated these guys 40 minutes into playing them and now here you are 4 full games later. Things get a little chippy out there.

Brendan Gallagher is the type of guy who you hate the most. And I mean that with as much respect as I can give him. I fucking love Brendan Gallagher anytime he's not playing against the Flyers. He's a world-class pest. He's small, he's an annoying prick, and he's got a ton of skill. He'll piss you off on one end of the ice, score a goal on the other, and then probably take your mom out to dinner after the game. He's a piece of shit and again, that is nothing but praise. But if you're going to be the type of player that Brendan Gallagher is, you are going to put yourself in a couple of dicey scenarios. And when you're like 5'3" playing against a bunch of massive individuals, sometimes shit like this happens.

Now something to keep in mind here. Zdeno Chara was handed down a $5K fine for that crosscheck. And not only was that a much worse incident than the Niskanen one, but it was also during the regular season. So if you think that a $5K fine gets even more severe in the playoffs, then you're a fucking idiot. No two ways about it.

But let's talk about the Niskanen incident real quick because it's blowing my mind how people aren't understanding what's going on. So first of all, you have Gallagher giving Niskanen a little crosscheck to the back to start things off. 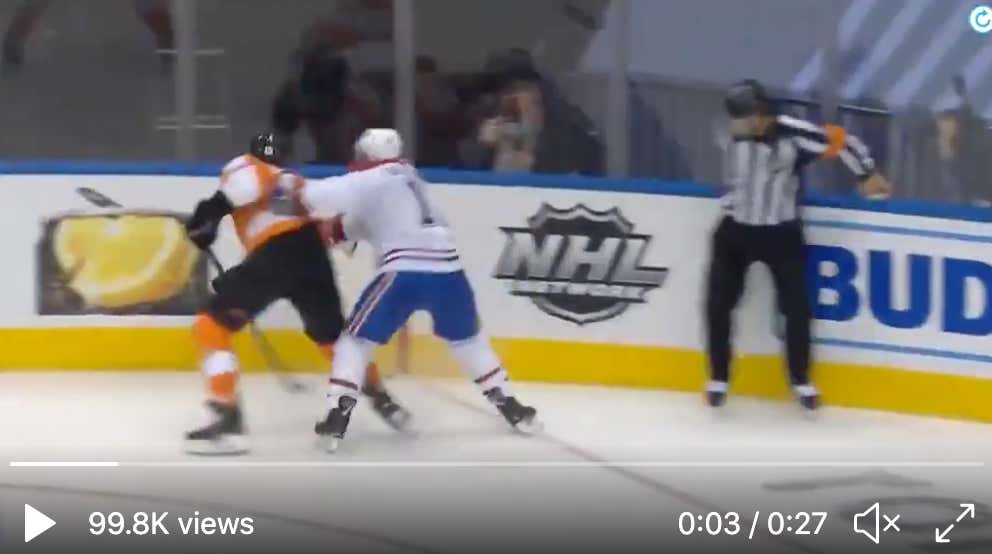 This isn't a big deal at all. This shit happens during every single puck battle in the corners ever. A quick shot to the small of the back is par for the course. But Gallagher is a pest and Niskanen doesn't like it. So he gets up and his intention is to return the favor. He decides to hop back up and now he's going to give Gallagher a little crosscheck to the back/kidney. 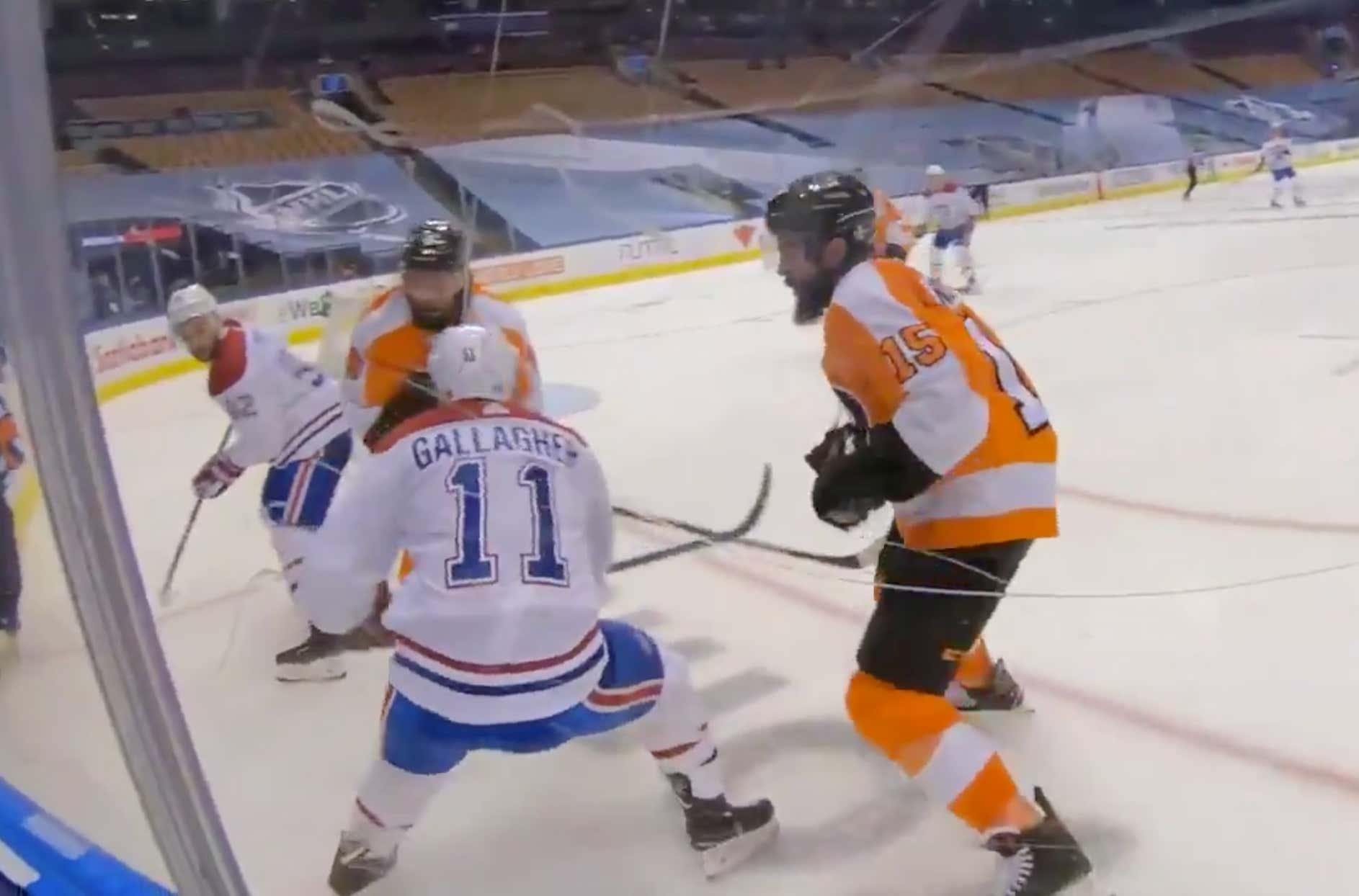 You can see that as Niskanen is loading up to give Gallagher a shot back, he has his back turned to him. Is crosschecking a guy in the back a legal play? No it's not. And this is one that Niskanen easily could have gotten a 2-minute minor for. But it's nowhere out of the ordinary. The issue, however, is when Gallagher turns. Not only does he turn his face to an oncoming Niskanen, but he's such a short little bastard that his face is at the logo of Niskanen's sweater. 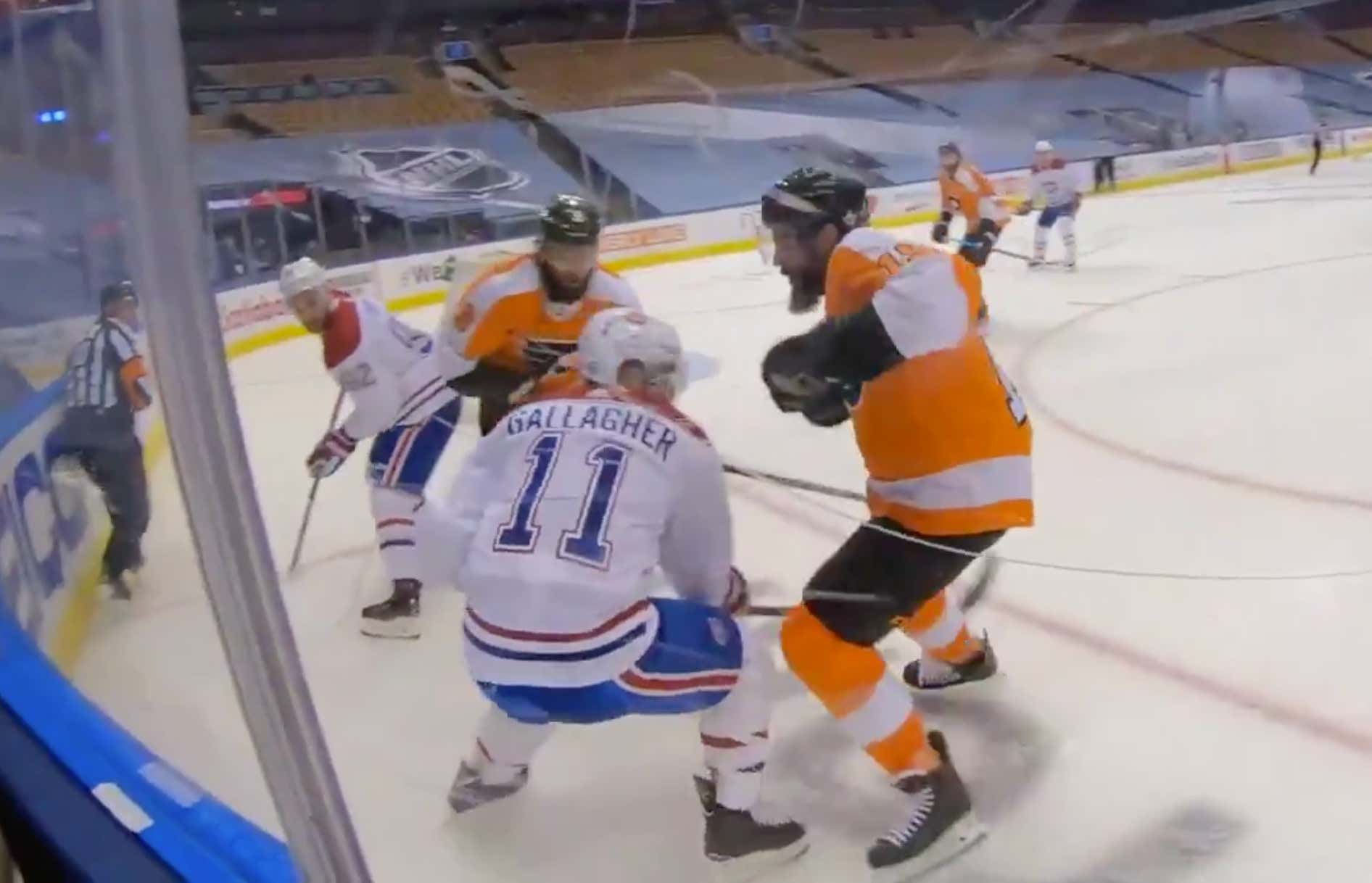 You can see which way Niskanen's hands are moving. He's looking to check downward and the original intention there is to get Gallagher right at the top of the pants. Oldest hockey trick in the book. Crosscheck down on the pants, takes their skates out from under them, happens a billion times. But with Gallagher being 5'2", that downward crosscheck then gets him right in the jaw. A jaw that Montreal is now trying to say is fractured. I mean his jaw seems to be working perfectly fine here as he still never shut up the entire game, but that's the word out of Montreal.

That's where things get real tricky, though. It sucks that Gallagher got hurt but there was unequivocally no intention there to go after the head. So are you going to penalize Matt Niskanen because Gallagher got injured? Because if that were any other player who is tall enough to ride a rollercoaster, there is no injury on the play. If that were any other player, we wouldn't here a peep about this because it was a hockey play from start to finish. Gallagher gave Niskanen a shot, Niskanen gave him a shot right back, both players move on about their business.

Don't get me wrong, if a 2-minute minor was called on Niskanen for the crosscheck and a 4-minute double minor was the result because of the blood? Then I'm totally fine with that call. If you want to fine him now because the refs were too incompetent to do their job in the first place but you still need to send a message? Then I'm totally fine with that because hey, it's not my money anyway. But anyone who thinks that this is worthy of a suspension is a complete and total moron. Which, coincidentally, seems to describe the entire Montreal Canadiens fanbase so I guess that all makes sense.

Sidenote: I see a lot of people out there saying that Matt Niskanen has a history with this sort of thing because of this incident with Crosby a couple years ago.

If you think that Matt Niskanen was buzzing around just waiting for Sidney Crosby (a guy who he spent 4 years with in Pittsburgh) to start falling over just so he could sneakily crosscheck him in the skull while Crosby's head was at his waist, then I don't know what to tell you. It just proves that you have worms for brains if you think there was any sort of intention on the Crosby incident and/or the Gallagher incident. Freak situations with shitty results, absolutely. But no intent to injure on either.

Oh and just for the sake of being completely fair and open--I thought the call on Kotkaniemi sucked last night. In no world does that hit deserve 5 & a game. And especially not in the playoffs. That was a garbage call for sure. But you can't penalize Niskanen just because the refs were dog shit last night.

P.S. - You want to talk about being reckless with your stick, let's talk about Max Domi.

Luckily Domi was spearing Kevin Hayes in the dick here because if he was trying to spear Brendan Gallagher, he would have caught him right in the face.

Game 6 should be intersting.