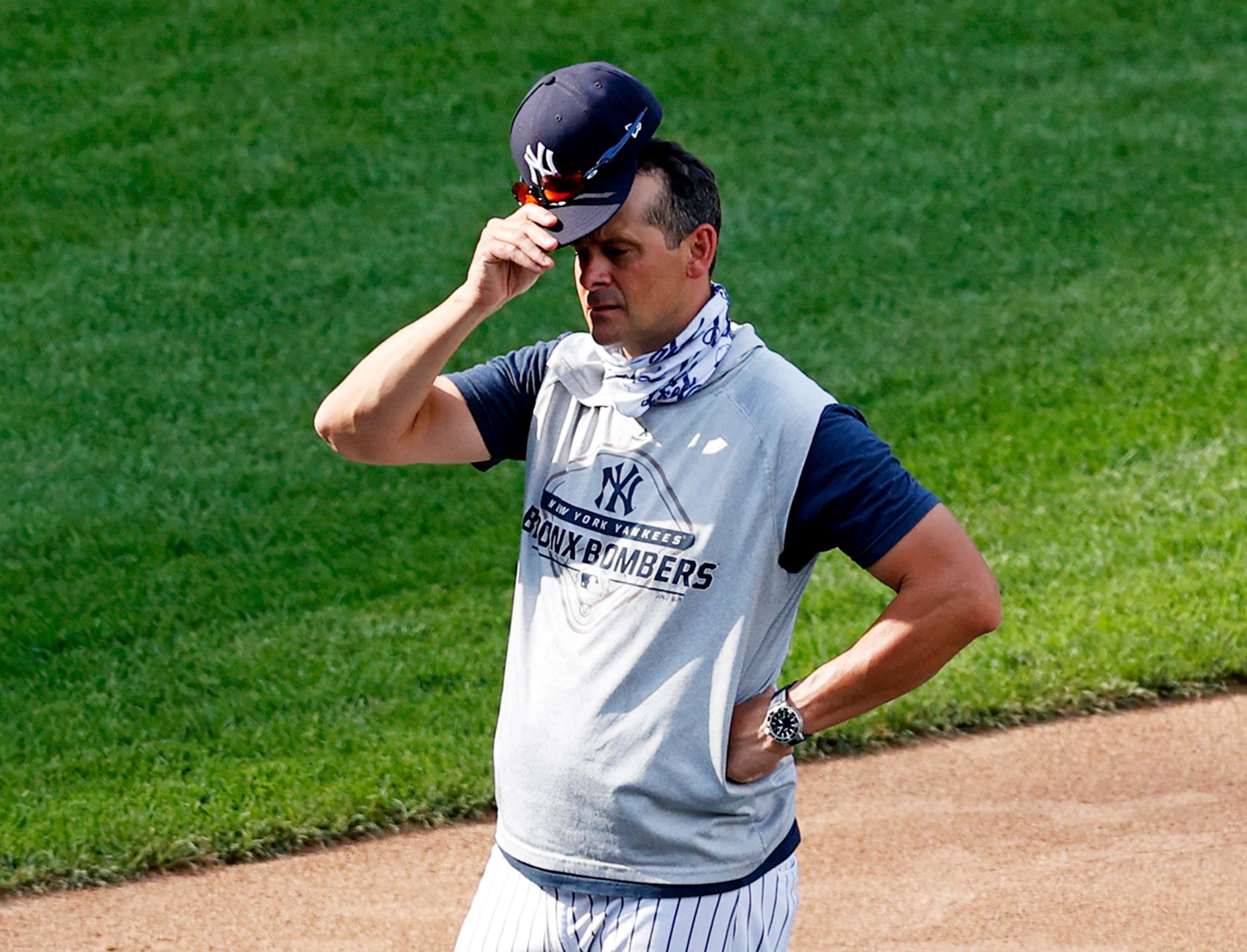 I'm going to need Aaron Boone to stop losing the Yankees baseball games. I mean how can a manager regress in his third season? Seems hard to do, but man has he made some bad moves in 2020. Literally losing games by himself. Take tonight for example!

The Yankees lead off the top of the 9th inning with back to back walks by Gleyber and Gary: 1st and 2nd nobody out down 2. Tyler Wade comes in to pinch run for the slow Yankees catcher. Cool, that makes perfect sense.

Now Brett Gardner and his .176 batting average steps to the plate. Why, I'm not terribly sure. I really do not understand why we're doing the whole start Gardner over Tauchman thing again, but here we are. Late in the game we're opting for Gardner at bats. What's he do? Weakly lines out to center, one out. Sick.

That brought up Mike Tauchman who had come in for defense in place of Clint Frazier. Kevin Cash takes out Chaz Roe and goes with the lefty Jalen Beeks. Tauchman notoriously hits lefties really well and has an .832 OPS against them. Guy has been nails in big spots and is the perfect dude you want up there to give you a good at bat. What's Boone do? PULLS TAUCHMAN. Why I have no fucking idea. Who does he bring in? Miguel Andujar. MIGUEL ANDUJAR and his 2 hits on the year. What the fuck are we doing man? What did Miggy do? An embarrassing non-competitive strikeout to waste a prime chance. Awesome. With two outs left and the runners moved up to third on a wild pitch, Boone was forced to go with Thairo Estrada at the plate and the game on the line. He struck out swinging to end it. Super.

You have to try really hard to mismanage the end of a game like Aaron Boone did on Wednesday night. I mean holy shit man it's not that hard. Why are we forcing Gardner and Andujar to get at bats over a guy like Tauchman? If you have an answer other than nostalgia I'd love to hear it.

Then there's the reason the Rays have 4 runs in that spot instead of 2. Zack Britton starts the 8th and is late getting over to cover first on a hot shot to Voit. Yandy Diaz reaches on the error and gets to second on the dropped ball. Diaz then waltzes over to 3rd on a wild pitch. Brandon Lowe walks. Britton then gets a prayer grounder to Gio who comes home to get Diaz going on contact. Miracle. Adam Ottavino is warming up and ready. He's given up one run in 8.1 IP this year, but for some reason Boone is terrified to go to him in these spots. Pretty clear that Britton doesn't have his best stuff (turns out he hurt his knee), so why not go to Otto? What about Chad Green? He's only been the best reliever in baseball in 2020. Not even warming up. What happens next? Back to back base hits to bring home the go ahead runs. Awesome. Fucking awesome.

Sure you can blame the offense for not scoring enough, but they faced a very good Tyler Glasnow tonight and got him out of the game with a tie ball game. Without DJ, Judge, and Giancarlo there are going to be nights where you have to win with 3 runs. In those games they have to be managed perfectly. Boone did not come close to that tonight. Horrible job maneuvering his way through this game. Wasted a very good Gerrit Cole as well. I know with the expanded playoffs these games don't mean as much to the Yankees as they should, but man you gotta start beating the Rays. They're not going away and will be competing for the AL East crown the rest of the season. Right now that baseball team has all the confidence in the world they can beat the Yankees. That's a problem.

The one thing I liked that Boone did tonight was pulling Cole when he did. Pitch count was over 100 and the top of the order in Austin Meadows was up at the plate. Gerrit Cole was NOT HAPPY being pulled. He wanted to finish off that inning and felt strong enough to do so. I love the fire he showed walking off the mound. You want that every time out there from your horse. Dude wants it. I have zero issue with him screaming at Boone.

6.2 IP 6 hits 2 runs, 1 walk 10 strikeouts. Only mistake all night was the hanging changeup to Choi. Zunino's homer you just tip your cap that he got the bat around to it on time. Just can't lose that game the way they did. Fucking Boone.