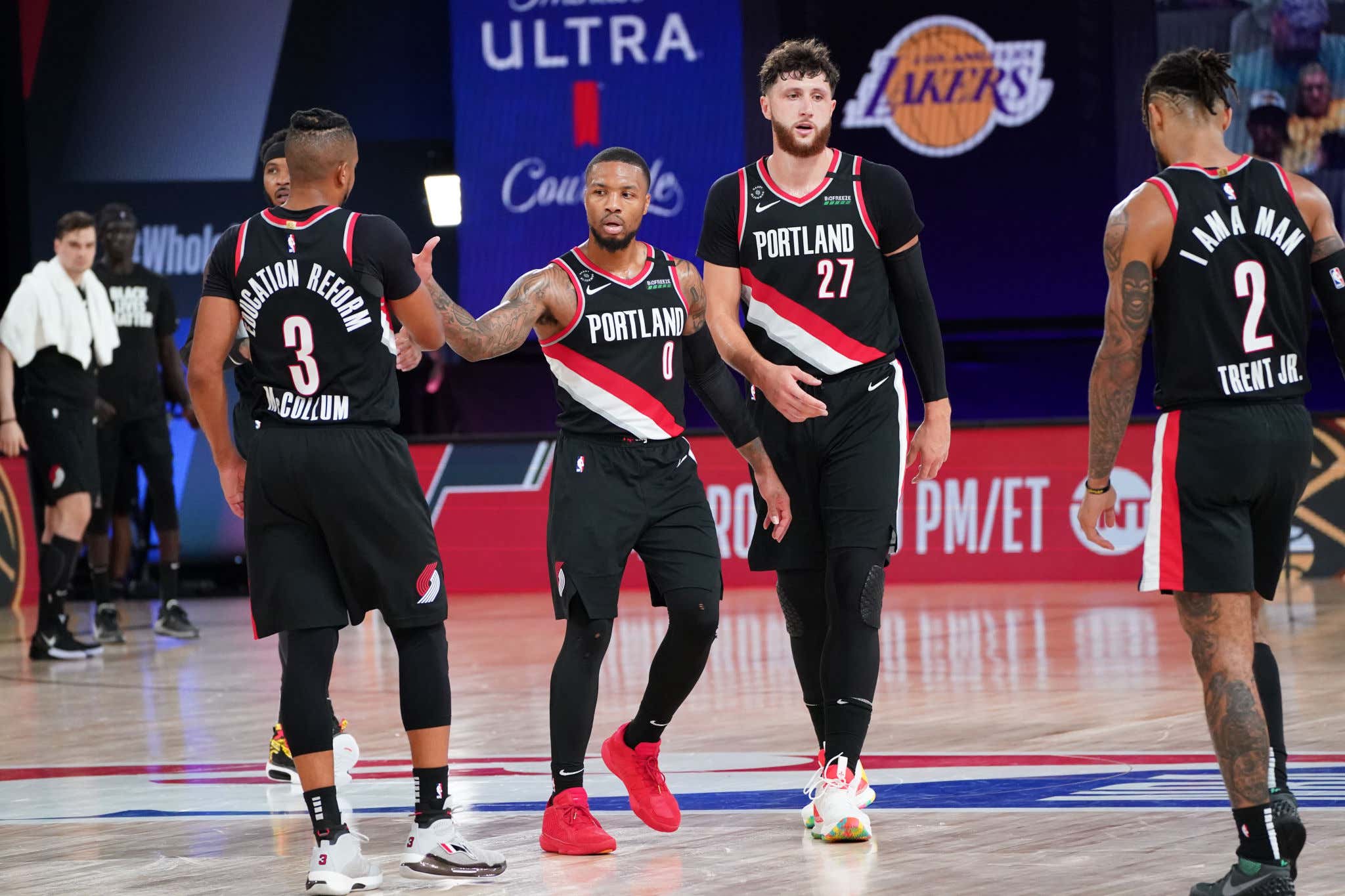 Good morning everybody happy Wednesday and welcome back to another edition of Last Night In The NBA where we bring you up to speed on everything that happened from the day before in the Association. It was our last slate of Game 1s and if Day 1 was all about chalk, then Day 2 was all about the upsets. For the first time since since 2003 we saw two 8 seeds pull off Game 1 wins. It's hard to imagine having a more perfect start to the bubble playoffs and the best part is things are just getting started. As always if you got busy and missed some of the action that's OK. Just keep reading because here's what happened.

Once again the first game of the day set the tone for what an awesome day of basketball was ahead. Of all the matchups in both conferences, this was one I feel like most people felt was going to be a sweep. That's nothing against Orlando, but after we learned Aaron Gordon and MCW would be missing the game combined with the fact that the Bucks have been a historic team all year, that's usually how things go.

Well shame on us all. We forgot that the Magic players get paid to play basketball as well. They punched the Bucks right in the goddamn nose to start this game and never let off the gas. There were only 3 lead changes in this game but they were all early. The Magic took the lead with 8 minutes left in the first quarter and then never trailed again. This was a beatdown in every sense of the word

Vucevic may have led the way with 35, but this was an entire team effort from the Magic. Every single time the Bucks tried to make a run, this team had an answer for it. We always knew this team could defend, but the offensive explosion they had against one of the best defenses the league has ever seen was truly astonishing. This is sort of their thing though, they are really good in Game 1s, they problem is usually what happens in the following games. But I'll tell you this. The Bucks now take the Magic a whole lot more serious. I'm sure they felt like they were going to just walk over the lowly Magic, that's only normal. Well now you see what happens. With no home court there's no advantage. The bubble has taught us that anyone can beat anyone on any given night. Even an 8 seed over an OVERWHELMING favorite.

For MIL, you shouldn't panic…..yet. Giannis was still a beast

and we aren't at the point where as a Bucks fan you need to start worrying about this series. We've seen this team drop a Game 1 before then rattle off 4 straight wins. If it's me I'm disappointed and maybe a little embarrassed as a Bucks fan, but I'm not freaking out. I will say it's not the best look for Khris Middleton to turn back into a pumpkin and throw up a 4-12 performance, and it's probably not ideal that Brook Lopez was taken to school and then some by Vucevic. That's not what you want to see.

Unfortunately for Bucks fans after screaming all year how nobody cares or watches or talks about the Bucks, this is not the debut you want. Now people are very much going to be talking about the Bucks but it's going to be a whole lot of how Giannis has to get out of MIL. That would annoy the shit out of me, but ya know, don't lose to the goddamn Magic if you don't want that shit to happen.

A matchup I think we were all excited to see given the beef these two teams have with each other, it went pretty much how you would expect. Unfortunately for the Pacers they lost Oladipo pretty early to a nasty eye poke

which was too bad because after he went out the game started to shift. Without him they had to rely on TJ Warren and Malcolm Brogdon, two guys that rose to the occasion and were really the only offense the Pacers had all night

It wasn't as if the Pacers played poorly, they just didn't have the firepower. That's to be expected when you are missing All Star talent like they are. Once the Heat built their lead in the second quarter, the Pacers found themselves in a dogfight. This was a 1 point game heading into the fourth, and the Pacers picked a bad time to go 39/42% from the floor while also not finding a way to stop Goran Dragic. If there's one positive takeaway it's that this has the look of a series that could be pretty competitive, and I'll always be down to watch TJ Warren vs Jimmy Butler.

For MIA, games like this are why you went out and got Jimmy Butler. The man competes. He had a monster game one that included back to back huge fourth quarter threes which was certainly a surprise coming from a 24% three point shooter

and that's how the Heat got it done. They didn't even really shoot all that great from deep, Duncan Robinson and Tyler Herro combined to shoot just 3-13, but the one thing we know about this Heat team is they play hard and they have some alphas on that roster. Just wait till they start making it rain from three, things could get ugly.

I don't think it's a stretch to say this game was a bit of a shock. Even if you thought the Rockets would win, I don't think many expected it to be such a blowout. Don't let the final score fool you, the Rockets were up by 20+ for most of this game. The Thunder's largest lead was 3 points. Here's the thing about the Rockets. It's easy to make fun of them when their threes aren't falling. You can beat them on an off night. But if you catch them on a night where those threes are falling? It's curtains for you.

Harden and Gordon did most of the damage for the starters, but for a team that made 20 3PM on the night, they had some help. The goal for the Rockets is simply to tread water until Westbrook gets back and to do that it means the bench is going to have to step up. May I present a combined 36 points from Ben McLemore and Jeff Green

Now I can tell you from personal experience, having to overly rely on Jeff Green is a dangerous way to live. Fortunately Westbrook will probably be back soon so Rockets fans can enjoy this one stress free.

We know this team can make threes, but what surprised me was their defense. They completely shut down the Thunder's three guards and that was not something I saw coming.

For OKC, the key to their success is how much of a problem they can be when all their guards are cooking in the same game. The CP3/SGA/Schroder trio is legit, but nobody really wanted to help CP3. His final line was good at 20/10/9 on 7-14 shooting

but he was pretty inefficient for long stretches of this game. SGA chipped in a 2-8 performances and Schroder 3-12. It's hard for this team to win when those three guys aren't all rolling at the same time. Gallo was nice, he was the best Thunder player on the night

and Steven Adams dominated the glass like we all thought he would. The only problem is math is a bitch. Trading 2s for 3s is what the Rockets want to do, and ultimately the math was working in their favor in Game 1.

It didn't take long for Lakers fans to completely turn on their roster huh. Go look at what Danny Green and KCP are dealing with on social media. Who knew everyone would jump ship after one loss? How embarrassing. Now the narrative you're hearing is that LeBron did everything but he just doesn't have any help

there's no denying his triple double was good, but in the game I watched I also saw him choke at the line in a HUGE spot. I'm also pretty sure he hand picked this entire roster. A roster that no Lakers fan said was bad before this Game 1 loss. In fact, many were talking sweep. That's odd. The fact is the guy they gutted their roster and future for in Anthony Davis flat out stunk and went 8-24 from the floor. He too missed huge FTs late in the fourth quarter. Not the best look for your two best players.

Then there's the shooting issue. A 35/15% performance is pretty pathetic, and this is the concern all non Lakers fans could see a mile away. This team does not have consistent shooting. Danny Green is either blazing hot or ice cold. Kuzma ain't it. Caruso their savior went 1-6 and couldn't stop Dame on the other end. LeBron and AD are able to mask a lot of their issues, but if one of them is off, things can fall apart quickly. I'd chalk it up to just a bad shooting night, but would it surprise anyone if the Lakers had a few more of those?

For POR, I mean who is hotter than Damian Lillard right now

He is not afraid of this Lakers team whatsoever and it shows. The Blazers took it right to the Lakers from the opening tip and showed us all why they feel like they can win 3 more games. I don't know where this team found that sort of defensive effort, but if that's going to be a thing now it certainly changes this series. Add in the fact that CJ McCollum got whatever he wanted offensively

and Melo is playing defense and hitting big shots

we have a series on our hands. The one advantage the Lakers have with their size really doesn't mean shit to the Blazers since they can match it pretty easily. Nurkic and Whiteside outplayed any and every Lakers big. Maybe it was just a one time thing, but you don't know. The playoffs are all about matchups and after one game I'd say the Blazers match up pretty well.

Much like Bucks fans I wouldn't panic as a Lakers fan. They have LeBron. But at the same time it's been great to see them all be so triggered online and social media. I can guarantee there will be some in the comments of this blog. They waited all those years to make the playoffs just to lose to an 8 seed. You hate to see it.

And that's it! You are now caught up with everything that went down yesterday in the NBA. We're back today with our first slate of Game 2s, so let's have ourselves a Wednesday!