NFL.com - The Chicago Bears imported Nick Foles to help push Mitchell Trubisky or take his job. Either or.

According to receiver-turned-running back Cordarrelle Patterson, the move has worked thus far to make Trubisky better entering his fourth season.

"He actually looks like a whole new player this year," Patterson said Tuesday. "I see it in his eyes and everything. He's got that fire in him. That's what we need out of our quarterbacks, that competition, it brings the best out of everybody. I'm excited to see what him and Nick can do for that job."

No better Blackhawks hangover cure than some mid-August speculation that Mitch is officially back. That the Nick Foles Trade is already paying dividends in the form of a more focused Mitch. And who better to recognize it than fan favorite Cordarrelle Patterson? He's broken huddles with Christian Ponder to Tom Brady with a lot of mediocrity in between. So when he talks about the look in his quarterback's eyes, please consider his eye-contact body of work.

Preseason Chicago Bears quarterback quotes are lot like ice cold Great Tasting Less Fillings in that 1 is too many but 10 isn't enough so let's keep moving. My thirst needs to be quenched:

I don't want to get caught up in units of measurement but did he say a little more urgency? I'm staying positive so I won't stress the importance of Maximum Urgency but at least it's a step in the right direction.

"I think it's a combination of everything," he said. "Just realizing this is the last year of my contract, being hurt last year and not playing up to my own expectations, going 8-8, having a quarterback competition and just the desire to want to go out and continue to chase greatness. It's a combination of all those things.

If I get stuck in a deep coma before week 1, just sit bedside and read this quote to me over & again until I wake. I'm here to chase greatness with you Mitch. We all are… ISNT THAT RIGHT GUYS

"For (Patterson) to say that means a lot to me. I'm just trying to do my job and I feel like I've worked on my craft this offseason, so for it to show up this early, it's nice for your teammates to notice."

"We're still out here trying to be great and I'm trying to bring that edge. You're playing each play like it's your last. Having that sense of urgency and trying to maximize your potential day in and day out, I think that's where that edge is coming from."

If you're keeping score, that's 3 distinct references to Bringing Edge and 2 more Sense of Urgency recognitions. I know it's still early in the quarterback competition but those are promising mid-August quote stats. Something tells me we're moving in the right direction, even if you guys have less conviction than a coin toss. 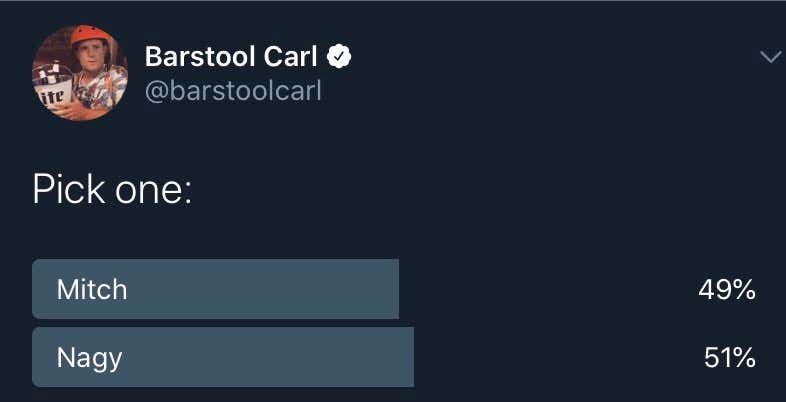 I love you Mitch.