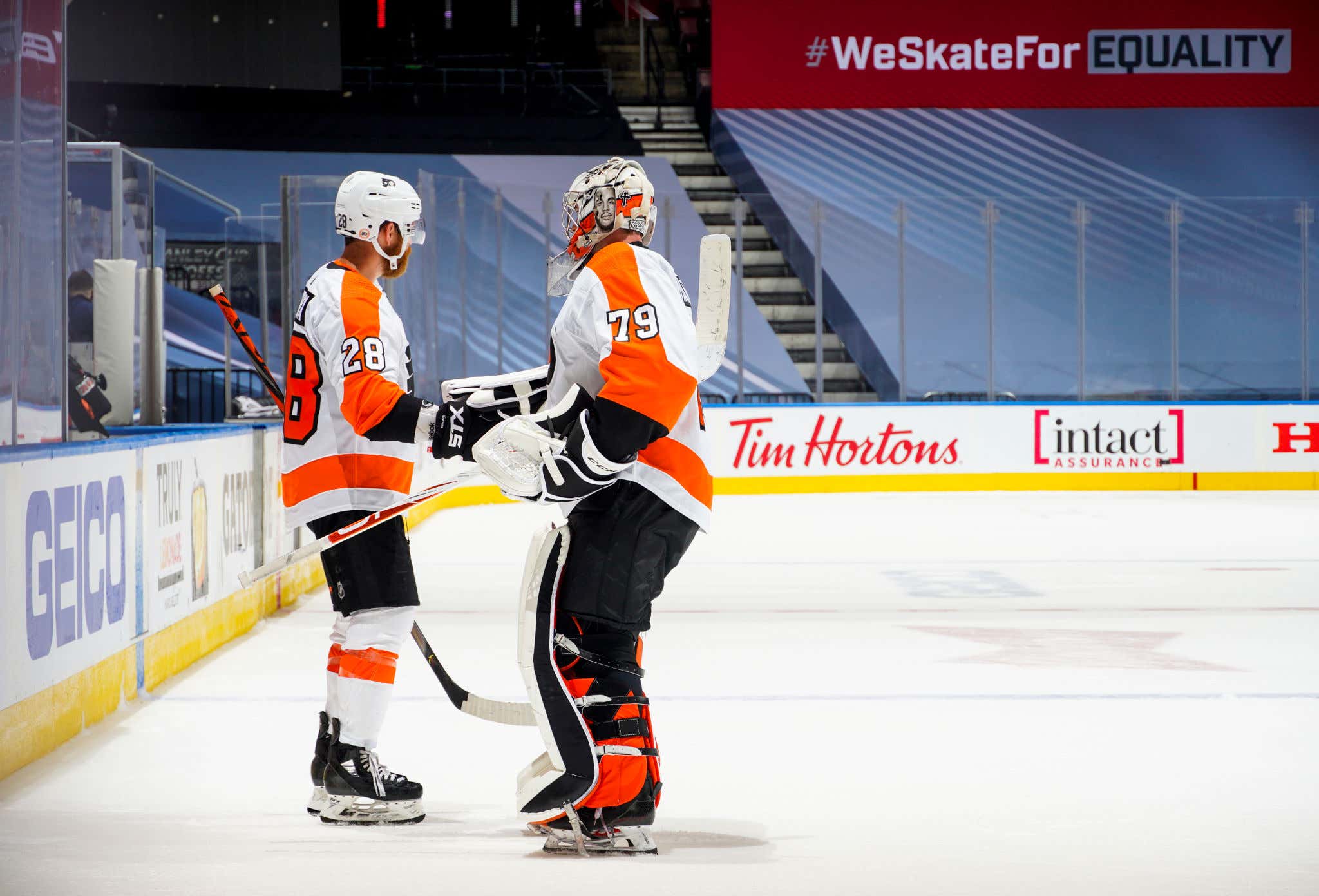 They don't ask how, they ask how many. And right now that number is 2 for the Philadelphia Flyers after they retake the series lead against Montreal after an absolute battle between the tendies last night. Unfortunately you're not going to see a game like that Calgary vs Dallas one from yesterday out of these two teams. A back-and-forth game where there were 5 goals scored in just the 2nd period alone. That won't happen here because Carter Hart and Carey Price are both just way too good. So if those are the types of games you are into, you're not going to have a very enjoyable time watching this Flyers vs Habs series. But this series is everything that playoff hockey is supposed to be. It's a battle, it's a grind, it's having to work for every breakout and every zone entry, it's dump & chase hockey and just trying to get pucks on net and praying you're able to catch a lucky deflection or rebound because that's the only way you're going to beat these goalies. It's ugly hockey as far as highlight reels are concerned, but this is playoff hockey right here. And despite shitting all over themselves in game 2, the Flyers have bounced back and now have a 2-1 series lead after Carter Hart (plus a little help from the posts and his teammates blocking 24 shots) shutout Les Habitants in game 3.

Again, it wasn't the most entertaining game in the world. It was downright frustrating as shit for plenty of moments, actually. Especially on the powerplay. But the Flyers proved they can win pretty against higher skill teams during the round robin stage of the bubble. Now they're proving they can win ugly against teams whose identity is to just try to outwork their opponents to death. So there are certainly reasons to be frustrated (again, this powerplay STINKS), but there are also plenty of reasons to be optimistic because the Flyers are proving themselves to be a bit of a hybrid team here in the playoffs so far. They're the prettiest of the "grind your fucking balls off" teams in this tournament. It's a Hard Dick Hockey Hybrid. That'll come in handy down the road later as long as they can lock up these next 2 wins.

Now let's get into some specifics.

Just Start Declining Powerplays For The Love Of God

1-for-25. No, that's not just your scoring percentage when talking to a girl at the bar. But that's what the Flyers powerplay has done in the bubble so far. This powerplay fucking stinks. It's garbage. And not just a small plastic bag you keep in the little trash can in your bathroom garbage. We're talking about those piles of trash that have turned into mountains on the sidewalk while the city is running at least 8 days late on your garbage collection right now. I mean holy shit, boys. Figure it out.

And the powerplay setup in the offensive alone is pretty stale. You'd think they would try to change things up a little instead of operating at 4%, but I guess having 3 head coaches behind the bench means that nobody wants to step in to make an in-game adjustment. But the issue isn't even the powerplay when they're set up in the offensive zone as much as its the fact that these idiots can't even get it into the zone to begin with. If the Flyers have had 50 minutes of powerplay time so far in the bubble, I'm willing to bet they've only been set up in the offensive zone for like 5 of those minutes. They lose faceoffs and then have to go all the way back down the ice to retrieve the puck. Then they fuck around for like 7 seconds trying to decide who is going to take the puck out of the zone. Then whoever takes it out of the zone struggles to get to the blueline for a little and then instead of either trying to carry the puck cleanly into the zone or dumping it in deep, they do the same slingshot shit that hasn't worked for like 7 years now.  The slingshot entry is trash. It never works but for some reason the Flyers are addicted to using it. And if by some miraculous chance they actually get the puck into the zone, everybody is already so flustered from that botched breakout that they just turn the puck over on their first cross-ice pass. So yeah, just start declining penalties because I'm pretty sure the Habs had more shorthanded chances last night than the Flyers did on the PP.

I will say, however, that this play from Giroux was sick. Eagles might want to sign him to play receiver. Agholor could never.

PECO Might Want To Just Start Sponsoring The Penalty Kill

For as appallingly putrid as the powerplay has looked, the penalty kill last night played out of their skulls. Now maybe part of that is because the Habs are dealing with the same powerplay struggles as the Flyers. But just watch this sequence right here.

Matt Niskanen steps up and soaks that one T from Weber. That gets you a 100 rating in the Ferda category. You step up to block a Weber bomb like that, you're one sick puppy. And then after Niskanen soaks that one, Pitlick makes the incredible play to just jump up and smack the puck out of the zone. So that's no shot on goal and takes at least 15 seconds off of the man advantage, probably closer to 20 when you think about how long it would take for Montreal to get set up again.

The Flyers PK has been making hustle play after hustle play, they always have active sticks in lanes to breakup passes, and they're usually pretty good about not compounding their mistakes. 5v4 has been brutal. 5v5 has been sketchy at times but overall I'd still give the Flyers the advantage. And 4v5 has been a huge boost for this team so far, especially last night.

The Flyers did a lot of things really poorly on Friday afternoon. But one thing that really stood out was that they simply would not try to score any greasy goals. They kept trying to make that one more perfect pass to get that one perfect shot on goal. And the shots that they did end up taking, Price was able to stare them down all the way from Montreal.

Well just over 5 minutes into the game last night, the Flyers made it clear they wouldn't be making that mistake again. They make it clear that they respect Carey Price and realize they need to just throw pucks on net and pray for a deflection or rebound. Resulting in the only goal scored on the night being a total grease fire. Giroux with the turnaround sling shot toward the front of the goal, Voracek parking his massive ass right in Carey Price's face, a quick deflection and it's in the back of the net. It's nothing like an Elias Pettersson snipe show, but it counts for just as many on the scoreboard.

Scott Laughton, Step Into My Office

Okay now get the fuck out of my office.

But seriously. These are the mistakes that you cannot make against the Canadiens team. They are a bunch of menaces to play against. They never let their opponent feel a moment of comfort. So if the Flyers aren't going to be ever to really settle in to any sort of 5v5 groove, they need to make the most of their opportunities and limit their mistakes. This was a huge mistake and Laughton had 2 of them. Just lazily trying to backhand a breakout pass across the ice on your own blueline? Buddy,,,,there are peewee coaches all across North America who dream about benching their kids for making a mistake like that, and you're in the show. Can't happen again because as much as I love Carter Hart and think he's the best goalie in the game, he won't be able to bail you out all of the time.

Oskar Deserves The 2nd Start For That Game

It's no coincidence that the Flyers' effort was approximately 230% better last night than it was on Friday afternoon. They got outworked and out hustled to every loose puck on Friday. Last night, you could tell the boys were competing a little harder for every inch of ice. And that's what getting Oskar Lindblom back on the ice with this team has done. It provides that spark and it provides that motivation to win because there's a chance that if the Flyers keep winning, Oskar Lindblom might be able to return to the lineup at some point during these playoffs. Obviously Carter gets the first star for the shutout. But Oskar clearly played a huge role in this win.

- Much like after game 1, I already wrote a blog on Carter so make sure to go check that one out right here if you haven't already.

- I thought Hagg and Raffl both looked really good in their first game of the series. I was definitely skeptical at first about taking Ghost and Farabee out of the lineup, but Hagg and Raffl both made that decision a non-factor. I thought Hagg looked strong on the puck and made a lot of smart, conservative decisions to make sure Montreal didn't get a ton of odd man rushes in transition. And then I think Raffl did what Raffl does best, which is just to work his ass off and not make any negative plays.

- Max Domi is a piece of shit.

- In case you forgot, Carter Hart shutout the Canadiens on Carey Price's birthday. People forget that.

Game 4 at 3pm on Tuesday. Time to keep the pressure on here fellas. Foot on their throats time. Hybrid Hard Dick Hockey.