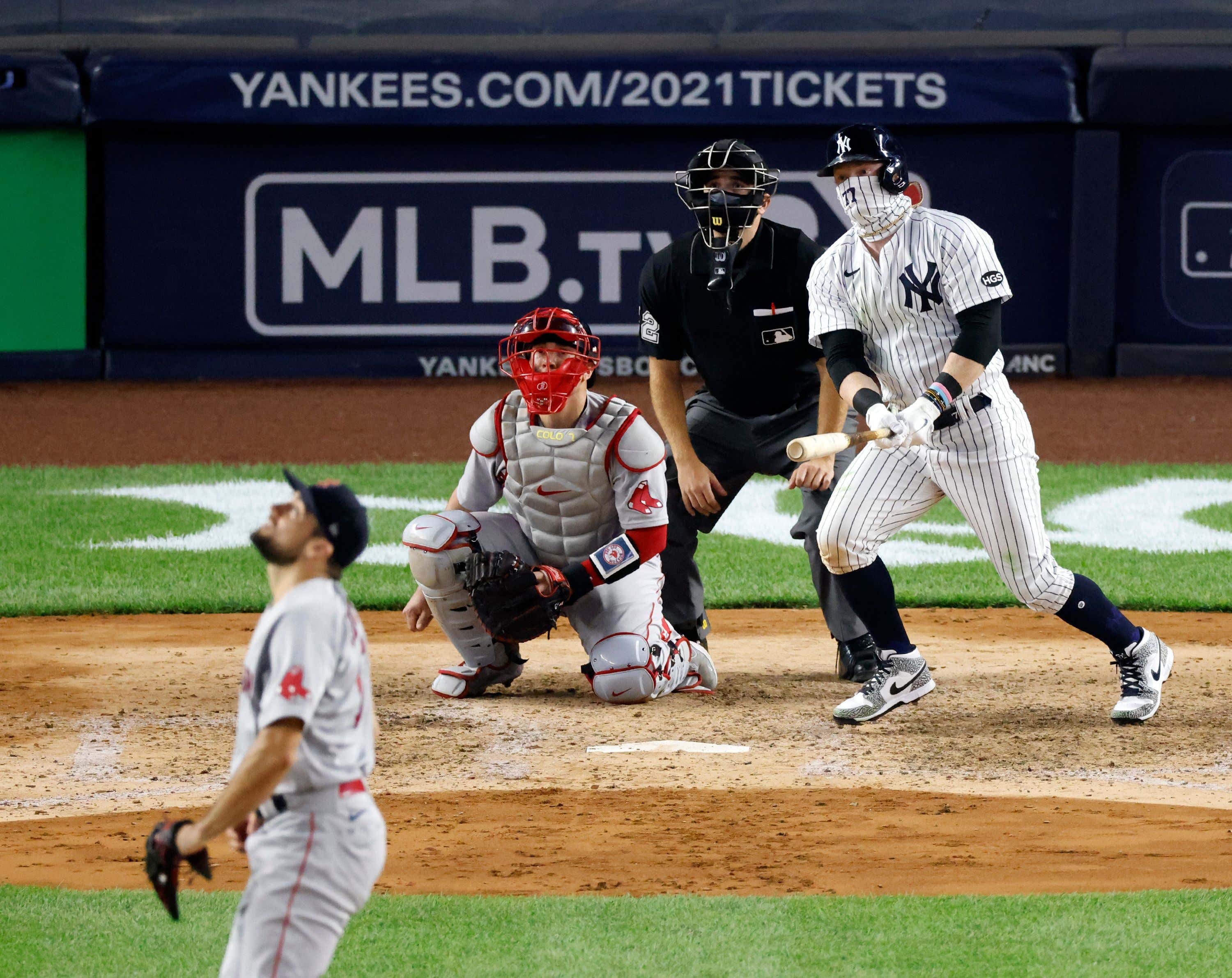 If you're a Yankees fan and you're not on the Clint Frazier hype train right now, then I have one question for you: What the fuck are you doing?

Since being recalled from the Alternate Site and making his season debut earlier this week, Frazier is 7 for 11 with two homers and eight (8) RBIs. He has just as many extra base hits in three games as Jose Altuve does in 19. Clint has returned to the lineup on a mission. With Aaron Judge and Giancarlo Stanton out for at least a few weeks (and I say that very optimistically knowing them) this gigantic opportunity has presented itself to the Yankees outfielder and he has pounced on it.

Last night he went a perfect 3 for 3 with 5 runs driven in.

Clint also has impressed with the glove, looking super comfortable out in right field. This has always been the knock on Clint, defense. Whether it was timing or dealing with the lights after his battle with concussions, it just was never a smooth process when a ball was hit to him. In these three games you've seen a much better defensive Frazier. See here on this sinking bloop by Bogaerts in the 1st. Frazier from a few years ago plays that ball with zero confidence and a lot of indecisiveness. Now he charges and makes the nice diving play. It's night and day.

He's doing it all, even on the mic. The maturity in this man's voice is impressive for what he's had to go through. This is a changed man.

The Yankees have fucked with him bad and left him out to dry. Called up, sent back down constantly. Told there was no room for him more times than you can count on your hand. Now he's back, is seizing this opportunity, and passing every test humanly possible. I'm just happy for the dude. As I've said before, you give him a full season of at bats and he's an All-Star. He just needed a chance. Sure it's only a few games, but man has he showed up. This is the kind of guy that can put a spark in a lineup that could be without Judge, Giancarlo, and DJ LeMahieu for the rest of the month.

Now why did I just say DJ LeMahieu? Where did that come from you asshole? Well, in the bottom of the 4th inning DJ LeMahieu took a swing at the plate and something immediately looked off. His bottom hand came off the bat and the second baseman appeared to be in a lot of pain.

Boone and the trainer came out to look at DJ as he refused to look back at them. LeMachine was disgusted that a piece of his body had failed him. He did not come out of the game, finished his at bat, and took the field in the next half inning. An inning later he came out to get everything looked at. X Rays on his thumb came back negative, but that doesn't mean we're in the clear. Further imaging done with MRIs and CT scans will tell the whole story. Is there a tear or are we just dealing with a sprain? We could be looking at 7-10 days, we could be looking at weeks. Who knows? I assume when Boone addresses the media later today he'll have an answer, but I'm not overly optimistic. Dude looked like he was in some serious pain and DJ is a guy who would rather die than come off the field. Losing him, Judge, and Giancarlo in a span of 10 days would be BRUTAL.

As I said when Judge headed to the I.L. it would be nice for guys who have struggled like Gleyber and Gary to step up. Both have done that. Gleyber picked up another two hits last night to get the average up to .234. We're getting there! Gary Sanchez blasted another homer giving him three straight games with a tank shot.

Don't look now, but Gary is tied for 2nd in homers at the catcher position. Do not let this man get hot.

Tonight is looking like a rain out or a delayed start. Anything to prevent J.A. Happ from taking the mound would be music to my ears, but we could also be looking at a 7 inning double header tomorrow. Anyways, 14-6, undefeated at Yankee Stadium and still comfortably in first place. Yankees are rolling. Pray for DJ.