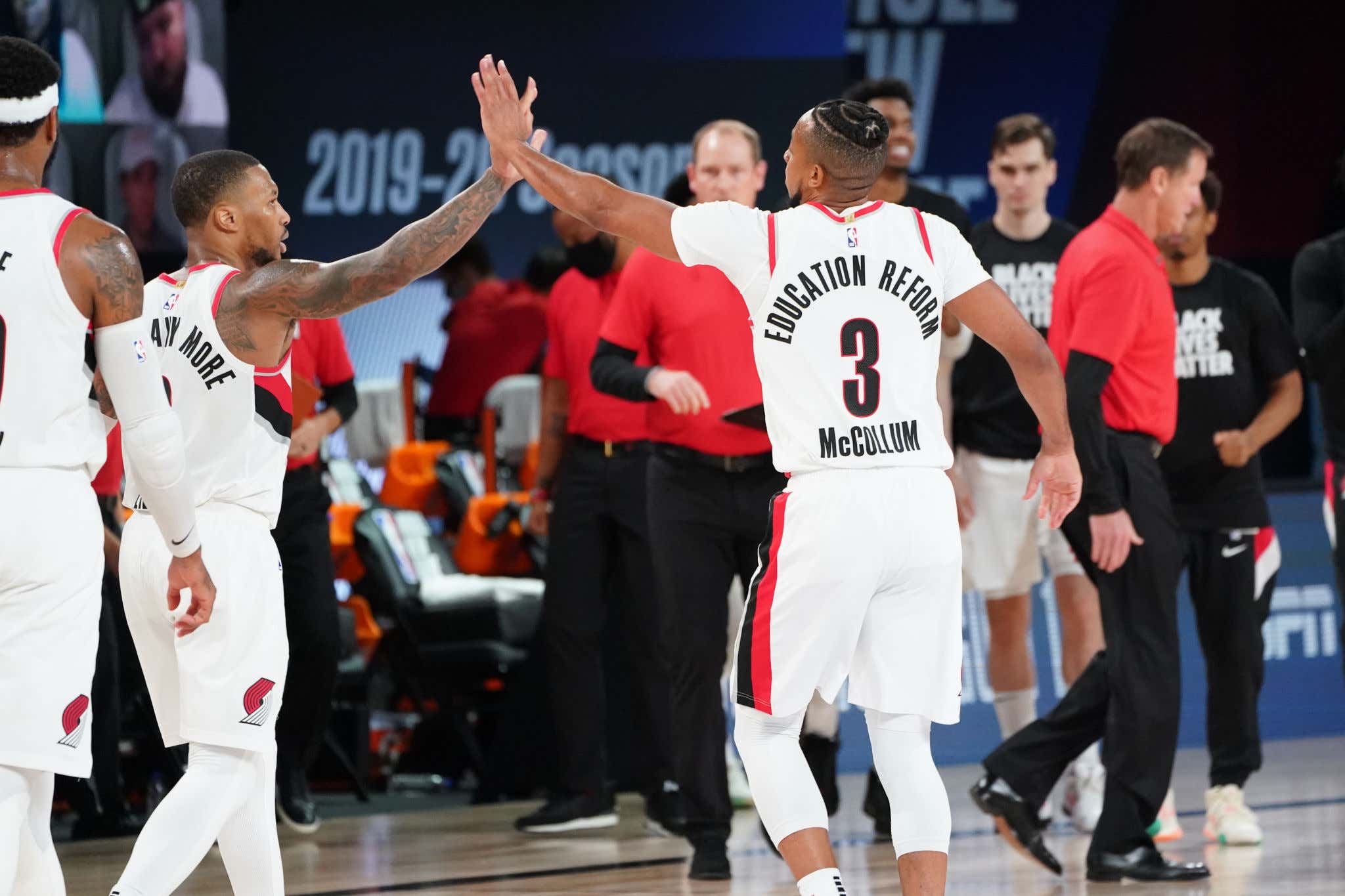 Good morning everybody happy Friday and welcome back to another edition of Last Night in The NBA where we bring you up to speed on everything that went down from the night before in the Association. It was a full slate of 7 games yesterday as we approach the finish line for the seeding games. The playoff matchups are set, the playoffs will be here any day now, but before we get into all that we first have to go through what we saw yesterday because man oh man was it another great day of basketball. As always if you missed any of the action that's OK, just keep reading because here's what happened.

We'll talk about the Celts in their normal blog, and seeing as how they rested their top 6 rotation guys this basically was a throwaway game for them and a chance to play their you guys. Instead we'll talk about the Wizards and really that means one guy. Thomas Bryant

This dude played hard and added his name to the list of big men that have absolutely shredded the Celts front court so far in the bubble. He finished with 26/9 on 10-15 shooting and you could say he took this game a little serious. While most were going through the motions, Thomas Bryant took full advantage. This is why even if there was no shot the Wizards would make the play in down in Orlando, these games are important for their young players to get reps in. If you don't know much about Thomas Bryant look him up. Pretty effective big on a great contract. It'll be interesting to see how he looks with Wall and Beal back next year.

To say this game was ugly though would be an understatement. Both teams shot under 40%, it was not exactly the beautiful brand of basketball we would get later in the day.

You'll see a common theme in this blog where all the contenders mainly rested everyone. LeBron did play which was odd, he threw up 17 points in 14 minutes so he looks ready. When I say everyone sat I mean everyone, even Kyle Kuzma. That gave guys like JR Smith and Dion Waiters the green light

Pretty terrible showing on the defensive end I'd say, at one point the Lakers were down 28 points, but lets do our best to try and not pretend like this matters at all. There were games on Thursday that actually did matter, but this was not one of them.

For SAC, hey at least something positive finally happened for them in the bubble! I'd argue shooting 56/44% with 21 3PM qualifies as positive. Bogdanovic was on the money basically from the jump

and the same was true for Buddy Hield

Although despite his production Buddy Hield is still pissed about coming off the bench and pretty much said so after the game. Considering they have Bogdanovic's RFA this offseason, that situation isn't getting better anytime soon. Something tells me Hield probably regrets signing that extension.

But in order to keep things positive, remember Jabari Parker? He's not only still in the NBA, he's on the Kings and he had 19 on 9-10 shooting!

Kings fans should focus on that an ignore everything else going on with their team. That'll only make you mad.

The Bucks just had to go out and ruin everything huh. What assholes. I know the Grizzlies coach is a Coach Bud guy and blah blah blah but this is why nobody like you Milwaukee. It's not because you're really good or have Giannis or any of that shit. It's because the ONE TIME we all wanted you to win, you get you ass kicked by the Grizzlies. A team that couldn't beat anybody. The basketball world wanted POR/PHX and all you had to do was win your last game. What dickheads. Instead they shot 39/37%, never led, never tied, and got down by as much as 23.

As punishment to Bucks fans I'm not showing a single highlight. Way to fuck it all up for the rest of us.

For MEM, this is awkward for me because I've been very clear these last few days I wanted no part of this team in the play in. Sorry if that offends, I love Ja Morant and think he's an absolute beast, but their team isn't the same without JJJ. If he was healthy I'd be all for them, but he's not and frankly POR/PHX would have been better.

But guys like Dillon Brooks and JV had other ideas.

then you sprinkle in a little Morant triple double action

and now after blowing their 8th spot, the Grizzlies will have their shot against the Blazers. They need to beat them twice which might be tough, but I could see them stealing the first game. The Blazers play less than zero defense.

I guess they "earned" this spot since they were in 8th all year, but still, Milwaukee boned us all.

I was actually shocked that the Mavs actually played Luka in this game. Why? Their seeding is already locked up, they sat Porzingis, there was no need for that. He did have 18 points in 13 minutes so that was cool I guess

and then Boban finally got some burn, nearly 30 minutes, and to no one's surprise he was a MONSTER with 18/20

Man Boban is so much fun. What a weapon.

But in the end this one was over pretty quick. The Mavs largest lead was 1 point, they got down by as much as 28, and you can add them to the list of teams that ran into the buzzsaw known as the Phoenix Suns. I will say, keep an eye on that outside shooting (8-26) because the Mavs did play a lot of their regulars

For PHX, what else is there to say. What they accomplished in the bubble was incredible. The only team in NBA history to close the season on an 8 game winning streak, they proved they belonged in Orlando and then some. It sucks that they made that type of run and still won't make the playoffs, but that's life. Play better during the year. Don't have Ayton take some shit he shouldn't and get suspended for 25 games. They did all they could to get in, but didn't control their own destiny. That's just a tough break but man were they fun to watch

Now comes the hard part though. Now they have to build on what we saw and come out next year and actually make the playoffs. They proved they have the talent to compete on that level, now it's time to actually do it.

You want to know what's crazy? There are stoolies reading this blog right now that weren't even alive the last time the Spurs didn't make the playoffs. Think about that shit. Their run is something I feel confident in saying that we will never see again in the NBA. 22 straight years of making the playoffs, 5 rings, it'll never be duplicated.

So while that may be sad for some Spurs fans out there, be excited about Keldon Johnson. This man looks to be another Spurs draft steal because of course he is

Sadly despite shooting 49/50% they still pretty much trailed the whole way. Their largest least was 1 point, down by as much as 17, they gave up 41 in the first quarter and that pretty much set the tone.

For UTA, they didn't play their rotation guys long so this game was more about their bench. A total of 6 bench players in double figures, you won't recognize many of these names so instead of breaking it out to each one, just watch it all in one place

I'm pretty sure the Jazz are locked into DEN for the first round, and given their Donovan Mitchell history that should be a fun series.

By far the game of the night. This thing felt like Game 7 of the NBA Finals or some shit. OK maybe not that crazy, so instead maybe Game 7 of the second round. What I'm trying to get at is watching this game had he on the edge of my seat and I couldn't care less about either of these teams. This was the type of NBA drama that I missed so much during the hiatus. Now, please allow me to shut the fuck up and let you enjoy Damian Lillard doing Damian Lillard things

Dame willed his team to the playoffs, no other way to say it. As awesome as he is offensively, I also love how much he trusts his teammates to take and make big shots. That's pretty rare with a player of his stature. He didn't force anything, he made big shots when he had to, and now we're on step closer to Dame vs LeBron.

It was about a thrilling a bubble game as you could have. The Blazers desperately need to find a way to play any sort of defense whatsoever, but then again if Dame is gonna average 50 then whatever.

For BKN, a ton of respect for the Nets for how they've played in Orlando. Everyone counted them out once 90% of their team didn't play, but they play hard every single night. They are not a pushover by any means. We saw a version of Caris LeVert that showed up earlier in the year when he had like 40 in the fourth quarter and OT against the Celts. That dude is a problem and very much a bucket getter

He had his chance to win the game in the final seconds, but for the first time in forever he was unable to get into the paint and had to settle for the contested long two that wasn't close. Either way, Nets fans have to be excited about how their team looks and more importantly how LeVert is developing so he can be the third guy next to Kyrie and KD.

I'll be honest, I didn't even know this game was going on. I stopped caring about the Pelicans long ago. But they did have some guys who showed out, so for any Pelicans fans out there here ya go

That was cool I guess. They're still the biggest disappointment of the bubble, but at least they had that moment.

For ORL, you got your same old consistent Vucevic who is basically a walking 20 points

but let's be real here. They have a date with Giannis & Co coming up. Love the effort the play with, but that'll be over quickly.

And that's it! You are now caught up with everything that went down last night in the NBA. We're back today with our final 4 games before the playoffs start on Monday. Overall I think we can all agree this has been a smashing success so lets see if we end on the same sort of high note. Have a great Friday!