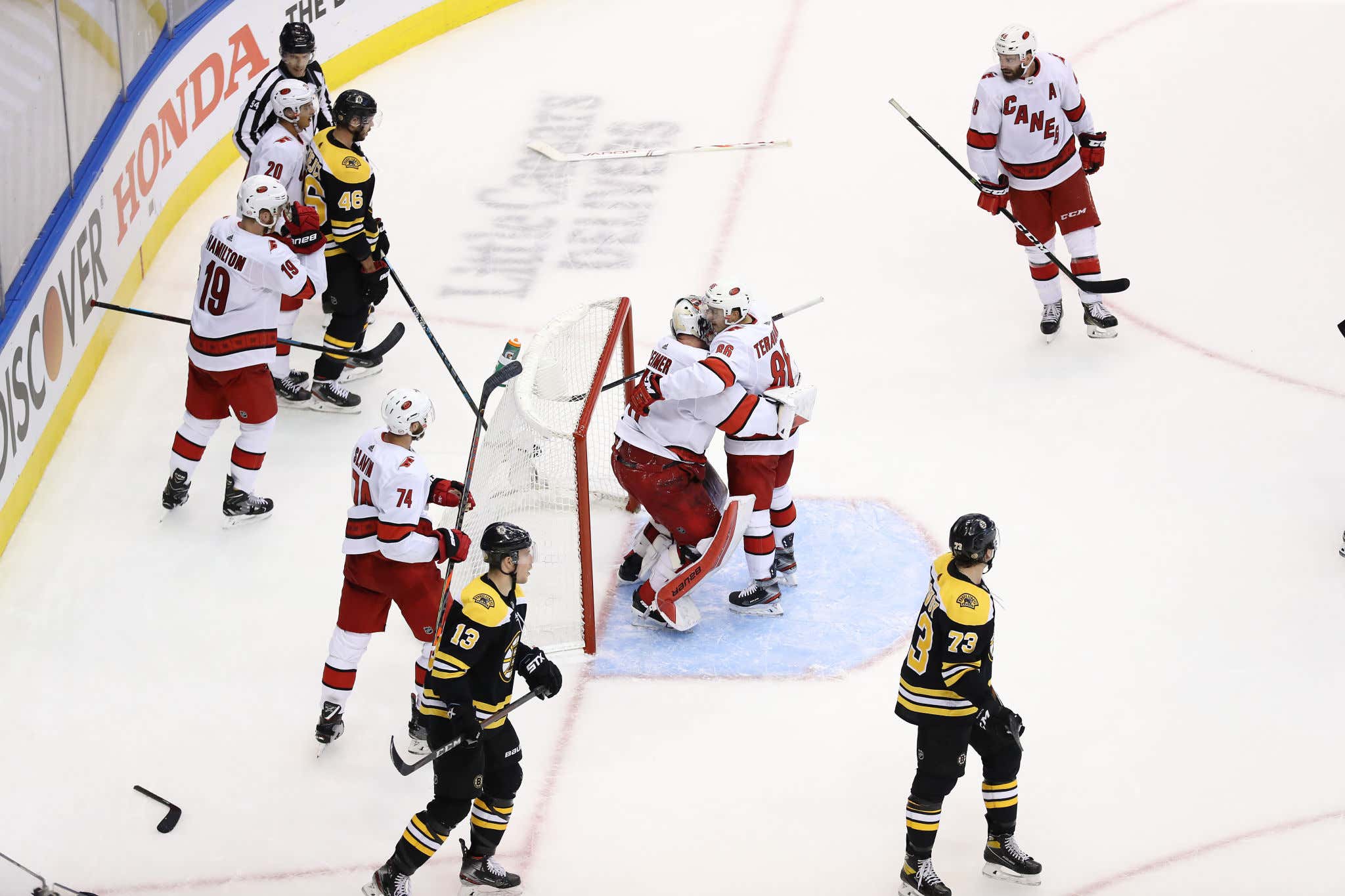 We've got a series, folks. Frustrating night for the B's as they dropped Game 2 to to the Carolina Hurricanes, sloppy play and brutal turnovers plagued them despite outshooting and outplaying Carolina for much of the game. Credit to the Canes for capitalizing on the B's mistakes. Series is all tied, 1-1.

The big news before puck drop was that David Pastrnak wasn't playing. Looked like he tweaked something (or reaggravated) after celebrating Bergy's goal on Wednesday. Obviously all speculation, but hopefully he's back sooner than later. Bruce Cassidy said he was questionable heading into tonight and hopefully he's not out too long…

David Krejci opened the scoring late in the 1st on the PP. He took David Pastrnak's spot and took advantage of a stickless Jordan Staal. 1-0 Bruins.

Carolina started tilting the ice in the 2nd and took advantage of a suspect elbowing penalty on Chris Wagner and Teuvo Teravainen tied the game 1-1 with 4:47 to go in the 2nd.

The Canes gained the lead 30 seconds later when Andrei Svechnikov rocketed one over Tuukka Rask's blocker. 2-1 Carolina with 3:19 left in the 2nd. This is Carolina at their best, when they can sling the puck and fire away. Unreal shot from Svechnikov.

Just like the Hurricanes, the B's capitalized off a soft call (Torey Krug got tripped up on his own volition). Brad Marchand scored with with 4.4 left in the 3rd tied things up as he got inside on Trevor van Riemsdyk and roofed one after Patrice Bergeron hit the post. 2-2 heading into the 3rd.

The Canes thought they had the go ahead goal but it was waved off on the ice, Rod Brindamour challenged it(!) and it was confirmed no goal, goalie interference after replay. Yes Torey pushed Teravainen initially, but he had plenty of time to get out. Kind of a crazy challenge, B's went on the PP but the Canes killed it off. Would've loved for the PP to come through there. 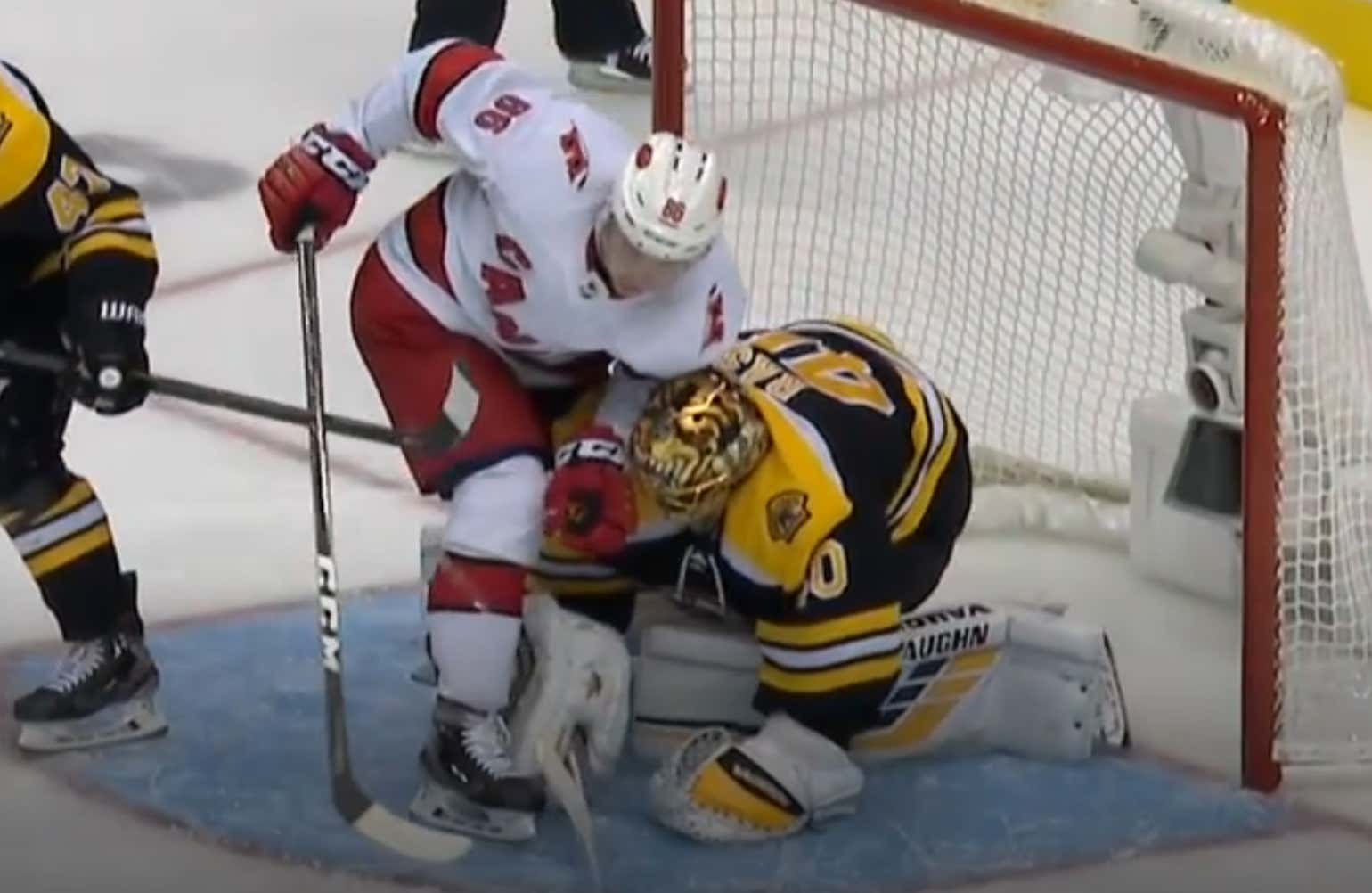 David Krejci turned the puck over in the O zone, Jake DeBrusk couldn't clear and former Bruin Dougie Hamilton came in off the right point and laid into one to give the Canes the 3-2 lead. Self inflicted. Ended up being the game winner.

- David Pastrnak was out of the lineup tonight, Bruce Cassidy called him questionable heading into tonight, hope it's not long term. Karson Kuhlman drew in. Anders Bjork slid up to play with Patrice Bergeron and Brad Marchand. Thought he played well early, and then kind of fell off. We'll see what happens on Saturday if 88 can return, will probably be a game time decision.

- Too many turnovers for the B's tonight. Carolina tilted the ice in the 2nd and they had no answer. All self inflicted wounds too, credit to the Hurricanes for punishing the B's for their mistakes. They had extended pressure in the B's zone. Couldn't clear.

- David Krejci keeps on trucking. He recorded the B's first PPG of the playoffs (took David Pastrnak's place on PP1). Playoff Krech is just a different breed. Kase once again followed up with another strong game. Him and DeBrusk are so close to connecting I can feel it. Krejci is driving that line but the other 2 are close. Krejci nearly converted early in the 3rd but roofed it.

- Speaking of the PP… If you were to tell me David Pastrnak wasn't going to play and the B's would still score 2 power play goals I would've called you a liar. Obviously the only bright spot in tonight's game was two goals on the man advantage. Still looking for the B's to generate sustained offense 5 on 5.

- Vintage Marchand. Goal and an assist for 63 tonight. Broke his stick twice in the final 30 seconds, but really liked his game tonight.

- Bad blood is starting to boil between these two teams. McAvoy especially has been all over the ice, got drilled by Svechnikov, Zdeno Chara stood up for him. Probably should've been called for ripping off Staal's helmet, but I've really liked Chuckie's game this series. Would love to see him chip in offensively, but I think him and Matt Grzelcyk have both really seen the ice well.

- Officiating has been suspect for both sides, both teams scored after sus calls. I'll give you the fact that McAvoy should have gotten called for ripping off Staal's helmet, sure. But Lauzon got a phantom unsportsmanlike, Wagner's penalty was 50-50 at BEST… it's not entirely slanted in favor of Boston, refs have sucked for both teams. Both teams have capitalized off dumb penalties. Every team gets fucked in the playoffs. Not just yours. But I guess nature is truly healing when you have both fan bases complaining about the refs.

- Nick Ritchie hasn't made an impact in this series yet, it's easy to pick on him but it seems like everyone is going but him. Jack Studnicka could be a nice injection of youth and could help generate some offense.

- James Reimer started for Carolina tonight instead of Petr Mrazek. Thought he was shaky at times with some big rebounds but the B's couldn't take advantage. It'll be interesting to see if Carolina goes back to Mrazek on Saturday, I wouldn't be surprised if they do. Reimer got them the win but they'll most likely go back to their No. 1.

- Thought Tuukka Rask played much better tonight, 23 saves on 26. Obviously couldn't cut the angle off on Hamilton's howitzer. Said he felt good and wasn't tired. Should be good to go on Saturday. Wish he would stop calling it exhibition though haha.

Really felt like the B's beat themselves tonight, outplayed Carolina but the Canes capitalized on their mistakes and made it a series. Back at it on Saturday for a 12 pm matinee. Big game. Time to regroup and push back.