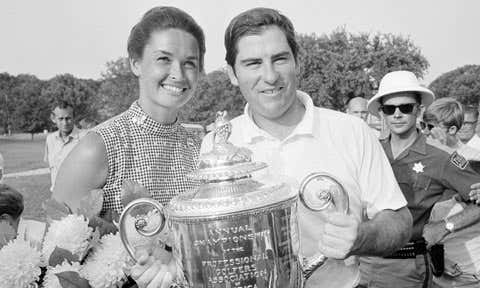 Dave Stockton, despite a final round 73, wins the PGA Championship at Southern Hills County Club in Tulsa. Stockton is the only golfer to finish under par at -1, finishing two strokes better than Arnold Palmer and Bob Murphy. It is the third runner up for Palmer at the PGA, the one major championship that eluded him throughout his career. Stockton would win a second PGA Championship in 1976.

Arnold Palmer was always one of the more popular players on the PGA tour as he had packs of followers on every hole. The fans were named Arnie’s Army as the golfer born on September 10, 1929, in Latrobe, Pennsylvania. Palmer on seven career majors, the Masters Tournament four times, won the Open Championship twice and took the U.S. Open in 1960. However, the PGA Championship alluded Arnold Palmer. He had previously finished second in 1964 and 1968 as he continued to seek the career grand slam in the 1970 PGA.

The fourth and final major of 1970 was held at Southern Hills Country Clun in Tulsa, Oklahoma. It had previously hosted the U.S. Open in 1958. Jack Nicklaus, who had won the Open Championship in July, had a terrific first round, shot a two-under-par 68 and was tied with Johnny Miller after the first round. Charles Coody and Larry Hinson were each one stroke back at -1, while Dave Stockton and Arnold Palmer each were level par after 18 holes.

The course played havoc on the field in the second round, as rounds under par were few and far between. Dave Stockton was on top of the leaderboard after shooting a second consecutive round of 70. Larry Hinson also went into the weekend at level par, as there were no golfers in red numbers at the midway point. Mike Hill, Hale Irwin, and Mason Rudolph were each one stroke back at +1, while Arnold Palmer was two strokes off the lead. It was a Friday to forget for Jack Nicklaus, as he shot at 76.

Saturday was a scorcher at Southern Hills, with temperatures over 100 degrees. Dave Stockton, who went into the weekend as one of two golfers at level par, shot a four-under-par 66 to build a three-stroke lead heading into the final round. Raymond Floyd, who struggled in the first two rounds, had a 65 and stood at one-under. Arnold Palmer played himself into contention with a 69 to sit in third place at +1.

Arnold Palmer looked to make a charge on Sunday, as Dave Stockton came back to the pack with 73, finishing with a 279, at one-under-par. Palmer was unable to catch Stockton as he remained at one over after shooting a 70. Bob Murphy made a charge with a 66 but also finished at one over tied for second. Jack Nicklaus also had a 66 on Sunday, but his struggles on Friday and Saturday left him in sixth place at +3. Raymond Floyd, who was one-under heading into Sunday, shot a 75 in the final round and finished four over par.

For Arnold Palmer, it would be the final time he contended in the final round at a PGA Championship as he finished runner up for the third time. Palmer would never capture the Wanamaker Trophy, missing out on the career Grand Slam. Dave Stockton, a previously unknown golfer, would win a second PGA Championship in 1976 at the Congressional Golf Club in Bethesda, Maryland.