Chicago Tribune - Vito & Nick’s, the iconic tavern-style pizzeria on the Southwest Side of Chicago, celebrates its 100th anniversary Thursday — finally. The pandemic postponed the party about six weeks. That’s just a blip for a family business that has survived a century, largely on a crackly thin crust, voted best in the city.

The men in the family have historically had top billing, but it was one woman who created the pizza legacy, and another who is guiding it into the future, coronavirus be damned.

“The original recipe from my grandmother is still in use,” said Rose Barraco George, 73, third-generation owner of the restaurant in the Ashburn neighborhood. Vito was her grandfather. Nick was her father.

George started working on the pizza line at 6 or 7 years old. Her training started even earlier. “My grandmother, she’d say to me, ‘You stand there and watch me. You can’t touch, but you watch,’” she said. “For God’s sake I must have watched for years and then all of a sudden she said, ‘Now it’s your turn. I’m going to watch.’ And that’s how I learned.”

After 67 years or so in the family business, George stayed at home through the first phases of the pandemic. “It was a good opportunity to show my sons how everything else is done, not just the dough,” she said. Her sons and grandchildren went over to her house, carefully following those early disinfecting protocols, to learn about the sauce and other details refined over decades.

During the statewide dining room closure ordered in March, George kept the pizzeria open for takeout, but not delivery, which they’ve never done. “My dad always said, ‘If they want my pizza, they’ll come and get it,’” she said. “And we’re still cash only.”

In 1920, her then 26- and 24-year-old grandparents, Vito and Mary Barraco, opened a tavern in the Lawndale neighborhood at 2708 W. Congress Parkway. That side of the street no longer exists. The Eisenhower Expressway now runs through the site.

“It looked like a speakeasy,” said George. You can see a photo of the founding family business at Vito and Nick’s in a newly hung gallery that spans the dining room. “From there they moved to 80th and Halsted, and opened Vito’s Tavern. My grandmother had a couple of sandwiches, like meatballs and sausage. Then they moved to 79th and Carpenter. That’s where the pizza began 75 years ago.”

Nick Barraco had just returned from World War II with an English war bride. He served as an American Army Air Forces medic, and she served in the British Women’s Auxiliary Air Force, said George. “My mother was also Mary Barraco, but her parents were from Ireland.”

“When my grandfather was alive, everyone saw him so it was ‘Vito, Vito, Vito,’” said George. “He passed in ’76. After, they’d see my father so it was ‘Nick, Nick, Nick’ so it became Nick & Vito’s to South Side people. In the phone directory, my dad put it both ways: Vito & Nick’s, and Nick & Vito’s.”

Being a transplant, I found out about Nick & Vito's real quick. Having disappointing pizza after disappointing pizza for what seemed like the first year of living here, and trashing them endlessly, my friends all spoke of this place like it was mythical. People here are so passionate in their love for this place you would easily get your teeth knocked out for talking shit about it. (I actually witnessed this happen at Hamilton's bar one night. r.i.p.)

Finally one day we hopped in our buddy's Jeep and drove to what seemed like another state. (From Rogers Park to south Pulaski takes about an hour on a good day). We passed through what felt like a warzone then ended up in a pretty nice old school Chicago neighborhood. When we pulled into the parking lot I instantly knew this place was the real deal. No big gaudy signage, Italian flag awning, and very few windows. 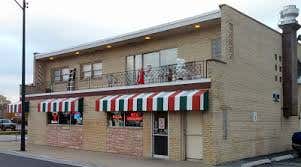 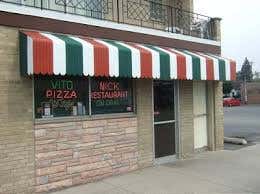 Reminded me a lot of Santarpio's in Boston.

Then we walked in and I knew the place was definitely legit.

There were no pimply faced kids behind the counter or manning the ovens. There was an old lady with a cigarette in one hand screaming on the phone for the caller to talk louder so she could understand her order and middle-aged to older guys pouring sweat shoveling pies in and out of the ovens. Their arms were hairless, singed from years of burns. And the only thing that was thicker than the accents (I had never heard such an over the top Chicago accent until I traveled that far south, it felt like a real-life SNL skit) were the smells. Holy shit did the place smell good. Even over the second-hand smoke.

We were sat at a table in the corner next to a wall that had shag carpet on it. It's fuckin amazing.

We were served Old Style in a pitcher and reminded that it was cash only.

As I looked around the place I realized I was sitting amongst real-life versions of characters from Married With Children. It was fuckin awesome. Character watching at it's finest. Lot's of city workers, blue-collar families- real salt of the earth people. Zero tourists or yuppies.

I let my friends do the ordering - an Italian Beef with Giardiniera, well done, and an Egg and Pepperoni, the house special.

Neither would have been my go-to's but when they arrived at the table I couldn't have been happier that I deferred to my buddies. The Italian Beef and Giardinera pizza was one of the best pizza's I've ever had not only in Chicago but anywhere. Which says a lot if you've ever gone from growing up on East Coast pizza your whole and then transitioning to Chicago. (The only place I've had one comparable to it is Phil's on 35th. The sausage and giardinera well done is lights out). I still order it every time I go or take out. 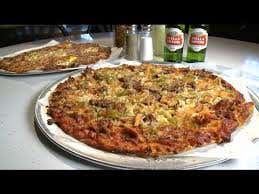 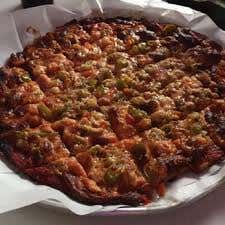 The egg & pepperoni pizza was a cult favorite and for good reason. What started out as an egg pizza like 100 years ago to appease the large Catholic customer base available only on Friday's, had evolved into an egg and fried pepperoni pie that locals and regulars always ordered. It was fire. 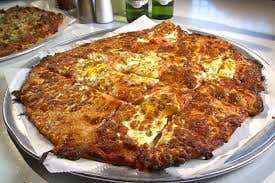 I still try to make it down there once a month. The pizza surprisingly travels really well and heats up in your oven extremely well. So its not one of those pizzas you have to sit your car and house because it's shit by the time you get home. (Even though a ton of people are posted up in the parking lot eating on their hoods now that they can't dine in.)

So yes, as my comrades Carl, Eddie, and White Sox Dave will fight you to death over, this is real Chicago pizza. Not the garbage downtown. If you come here, carve out a few hours out to hit this place, you will not be disappointed I promise you. I've taken both my sisters here and everybody else that's come to visit me from home and they've all been floored.

For heavens sake our guy Guy thinks its one of the best places he's ever eaten at.

(He also cracked the code that their dough secret is milk)

They're throwing a rager this weekend to celebrate -

The 100th anniversary party will be held outside in the parking lot. Like at the restaurant, seven days a week, it’s no reservations; first come, first served.

“I’m having a real small menu,” said George. “It’s only pizza with a few appetizers. I could seat a thousand people in that parking lot, but I won’t. I’m only going to put 300 or less, widely distributed. Tables are going to be about 10 feet apart. "

A 40-foot stage will showcase entertainment including a Blues Brothers tribute band complete with the Bluesmobile car.

George will also announce from stage their new franchising program, which will include everything for a business to make their pizzas, from the dough to sauce to fatty fennel sausage, but not the secret family recipes of course.

Free parking will be available across the street in the old CVS, and at the Hometown Plaza strip mall with a shuttle bus.

“I’m going to constantly be on the PA telling people to please social distance,” said George. “Wear your mask. If you’re eating or drinking, then sit. If you’re not, please put your mask back on.”

“I just bought a thousand masks,” she said. “I’m praying to God they really listen and I’m going to do my damnedest to make sure they do.”