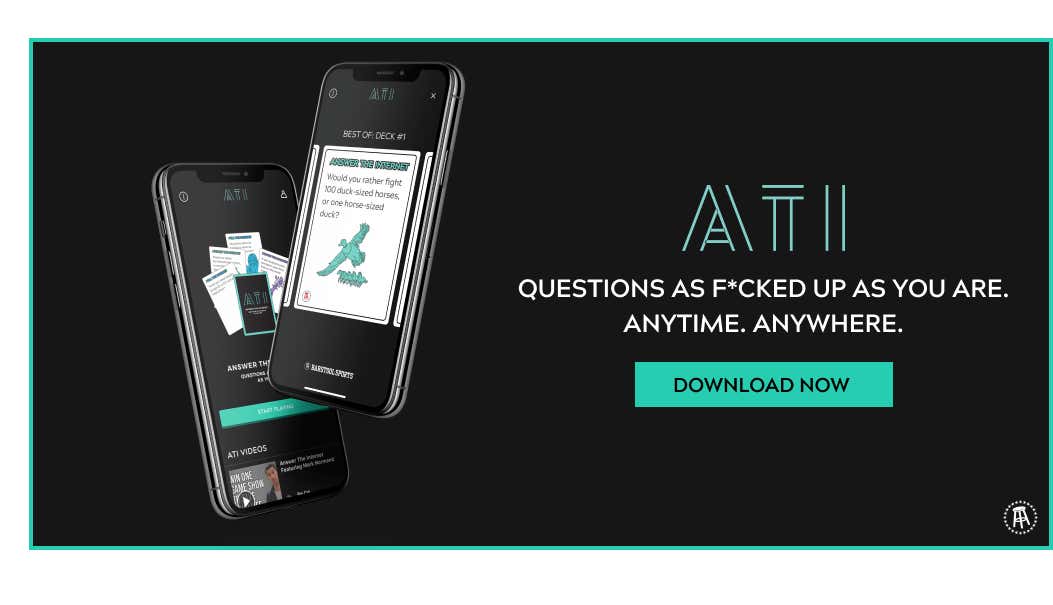 The card game that took the internet by storm is now available in the palm of your hand. Answer The Internet, with all those questions just as fucked up as you are, sitting right in your pocket now. So, wherever you go - the bar, the beach, the road trip, the bachelor or bachelorette party, wherever it may be - you now have the convo starter or the party game with you at all times.

The app is free to download and contains 2 decks featuring the best questions from the original 500 cards in the ATI box. Then from there you can download 5 new expansions decks - 50 cards all with different themes. The first 5 are:

You can by them al a carte, or purchase them in bundles of 3 or all 5. The app also features all the videos from the Answer The Internet youtube series with all the top comedians and celebrities in the game, so you can consume all that ATI content while playing it yourself.

This is just the first stage of the app, hopefully. I told our developers that I wanted to treat ATI as its own company and make this app a fully functioning with every piece of technology possible. So they've left it open ended to make it fully interactive. I have visions of being able to submit your own questions, customize your own decks, film players answering their questions, and create a username that has your Answer The Internet profile. I want an app that tracks all your answers and matches you with other participants who answered the same. Create a little community of ATI users who can then interact with each other regarding the questions and answers. Hell, I wouldnt mind turning it into a dating app - tonight you can match with and bang all the people who also said they would rather fuck behind a dumpster than in the back seat of a Volkswagon!

But all jokes aside, Answer The Internet has been our biggest KFC Radio spin off success because people seem to LOVE this banter. The game has sold like crazy, and I'm hoping that with the ease and convenience, the app will surpass that. Along with the podcast, and radio, and video content, and all our other merch, Answer The Internet is another operation in a long list of things we do here at Barstool. But, its been the most successful and watching fans gravitate towards it and enjoy it after listening to it on the podcast and watching on youtube has been awesome. I know that the generic joke about the type of content from ATI is like "Would you rather fuck your mom or your dad!" and I totally understand it. But two things - 1) Our best questions are the more abstract and thought provoking questions that inspired some of the best conversations in Barstool podcast history, which is why theres 2 "Philosophy" themed packs to launch this app, and 2) as stupid and sophomoric as those sex/party/idiotic questions are, or as horrendous and confusing as the taboo questions from the Dark Web are, theres a reason why people enjoy it. Its a game that can be as basic or as complicated as you want. It can be as funny or serious as you'd like it to be. It can be a conversation starter if you wanna really discuss some shit, or it can be a party in your pocket if you wanna get the party going and get people opening up about the more off color subjects they dont ordinarily touch. You break out ATI with a party full of people from every walk of life - guys & girls, young & old, party animals & straight edge, right & left, buttoned up Type A & Type B free spirits - all of them will let their hair down, say some shit they wouldnt ordinarily say, let it fly and have a good time.

So download it now and start playing with your friends and family, and be on the lookout for updates which will hopefully let you play with people all over the world. This app is the next big step towards establishing ATI as the premiere party game. Thank you to everyone whos ever called the show and left some questions, all the fans we've interacted with over the years and had these arguments with, and any of the morons I've grown up with arguing "Who Would Win In A Fight?" or "Who Would You Rather Bang?" We've put the best of those questions from every walk of life in there along with internet classics and some Barstool originals and I think its really a phenomenal collection of questions to really stir the pot. Enjoy.