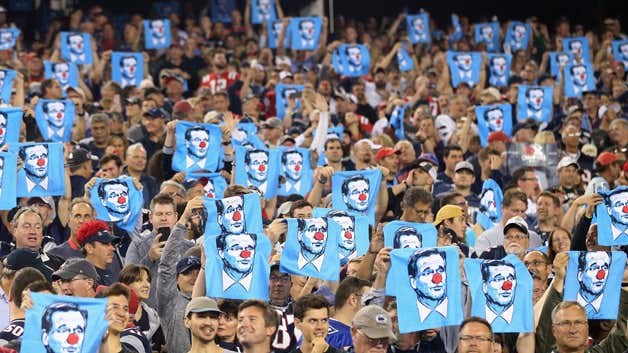 As of right now, the issue of fan attendance at NFL games is being addressed on a team-by-team, market-by-market basis. The suddenly very literal Washington Football Team has announced they plan to play their home Professional Football Competitions with no Ticket Holders There to Observe the Game. Jerry Jones of the Cowboys is pushing for full attendance. The Patriots have announced they're shooting for 20% attendance, pending state and local approval. Doing the math, that would give them ticket sales of just over 13,000, roughly equivalent to Cleveland at Jacksonville.

But according to this latest report from a Yahoo reporter, there might be a practical solution in the works to boost attendance further:

Pods. I don't exactly like the sound of it. In fact, it's kind of ominous, given the fact I've consumed way too much Sci-Fi in my life. In that genre, "pod" is a bit of a buzzword and it never means anything good.

Pod is what the aliens stuck humans in to suck the electricity out of us in "The Matrix." They're how they came to Earth and infected us in "Invasion of the Body Snatchers." They're what HAL used to kill the astronauts in "2001."

Sure, an escape pod is also how C3PO and R2D2 got off the Star Destroyer with the blueprints for Death Star I because some commander told some crew member to hold his fire because there were no life forms on board, inexplicably saving ammo when he could've stopped the rebellion in its tracks to save one cent on his ship's laser bill. But I digress. Don't ever get me started talking about pods.

As far as this idea, it sounds like it has potential. I'm generalizing here, but football is more of a social event than the other sports. Typically, you'll buy baseball tickets in groups of about four. You take your girlfriend to a hockey or a basketball game. With football, you come by the carload and meet up with other carloads. It's clusters of people huddled around grills and folding tables under pop-up shelters. You can't reasonably expect them to stay in pairs. But huge groups forming together like a giant weather pattern is still a bad idea.

Call me naive and say I'm not giving proper respect to the 'Vid, but it seems to me if teams stick to this pod idea, they can keep the social aspect while still adhering to the recommended distancing guidelines. You let people who've hung out together already in reasonably sized groups sit at the game in reasonably sized groups. The same groups. Not a mass of thousands, but not isolated in twos like they're being loaded onto a big boat in the Old Testament either. That's impractical and would require us all to pretend they were quarantining just as much in the parking lot, which they won't.

Worst case scenario with this pod concept is that, if there's a spread, it'll be isolated to the friends and family who chose to go together, and not to multitudes. You can't have this discussion without someone screaming at you that everyone needs to stay home and someone else screeching that they should just open everything up and let nature take its course. But this pod idea sounds like a legitimately good compromise for now. If compromise is thing our speicies is even still capable of.