If you want a lesson on how to obliterate the last shred of public trust or faith in a city's government then look no further than Chicago, Illinois. It's the Yale of civic ineptitude. Professors Lori Lightfoot and JB Pritzker are at the top of their field. Respected by peers and devoted students alike. Each day of class is a brand new case study that scholars from London School of Economics and Harvard Business School will study for years to come.

Today's lesson(s) were another set of incredibly enlightening ones. See below -

First off try to wrap your brain around this one.

NBC Chicago - The average number of new coronavirus cases in Illinois has been steadily increasing for more than a month, to the point where the state has nearly reached the threshold at which Chicago requires anyone entering the city from more than a dozen states to quarantine for 14 days under an emergency travel order.

That 14.3 per 100,000 figure puts Illinois just below the line at which the city of Chicago could theoretically include it in its list of states for which the city requires a 14-day quarantine under its emergency travel order.

States are added to Chicago's quarantine list if they have "a case rate greater than 15 new COVID-19 cases per 100,000 resident population, per day, over a 7-day rolling average," city officials say. Updated every Tuesday, that list now includes 19 states, including Wisconsin and Missouri, as well as Puerto Rico.

If you know the answer to this one, and don't mind me cheating off your paper, please let me know.

Next, we have a real mind-bender. Talking Mensa level.

Transportation Nation - Multiple social justice groups calling for 25,000 protesters to shut down a major interstate in Chicago this week are moving full speed ahead after reportedly reaching a deal with city officials.

The interstate shutdown is planned for this upcoming Saturday, August 15 beginning at 12 p.m. CDT.

According to one of the groups, Tikkun-Chai International, organizers met with Chicago city officials last week and reached a “compromise” that will allow protesters to shut down the interstate.

As part of the terms of that agreement, protesters will be provided safe passage along their planned route from Rogers Park, and ultimately, allowed entry onto the Dan Ryan Expressway.

The Dan Ryan Expressway runs from the Circle Interchange with Interstate 290 near Downtown Chicago through the South Side of the city.

The group said shutting down the interstate will be the “highlight of the event.”

However, some restrictions were agreed to such as: protesters will not be allowed to follow behind the march in a motor vehicle, no wagons or water coolers will be allowed, bikers will not be permitted, and participants must adhere to the designated route approved by city officials.

Further, the group indicated police “promised” to close the stretch of interstate and block entry “after [the] entire march is fully on the expressway.”

Last week, in an exclusive statement to TNN, an Illinois State Police (ISP) spokesperson said the Department intended to take “appropriate measures” and would “protect the rights of those seeking to peacefully protest, as well as ensuring the safety of the motoring public and public in general.”

One trucking group has taken legal action to stop not only the planned shutdown in Chicago, but also future demonstrations along major roadways.

The Small Business in Transportation Coalition (SBTC) is suing the United States Department of Transportation (USDOT) in U.S. District Court for failing to enforce federal law and prevent protests staged on interstates.

It is not clear how long Saturday’s protest will last, but truckers are advised to avoid the Dan Ryan during mid-day if at all possible.

The best part is how I found this all out.

This came across my radar this morning and I figured it was the election season heating up with some good old fashioned fake news meant to further divide everybody. Then I saw some fairly intelligent people posting it asking how is this being allowed to happen. Especially when things like 8pm curfews are now (once again) in place city wide. You can't seat or be seated with more than 5 of your friends at restaurants. You can't leave your house without a mask on. And on and on it goes. Given all that and how strict the city has been with pretty much everything except for looting, destruction of property, holding felons without bail, and a bunch of other wicked fun stuff there was no way this headline could be true. Right?

Trucking Info - According to a Facebook page, “Black Lives Matter March: Shutdown Our Dan Ryan,” the march is scheduled for Aug. 15 at noon at Garfield Blvd. and I-90.

It is hosted by several groups, including Tikkun Chai Inter-National, which says it is “a humanitarian organization that advocates and fights for human rights of all people,” and its Chicago auxiliary organization, the Chicago Activist Coalition for Justice. The groups are calling for 25,000 people to shut down the highway to draw attention to “stolen lives lost in police brutality.”

The Illinois Trucking Association told HDT that it has confirmed from Illinois State Police that this is a valid attempt to shut down the Dan Ryan. The State Police are working with local law enforcement to hopefully prevent protesters from entering the highway.

“ITA is advising trucking companies to avoid the Dan Ryan at that time and we are continuing to work closely with Illinois State Police to promote safety for everyone,” said Matt Hart, executive director.

The Dan Ryan Expressway runs from the Circle Interchange with Interstate 290 near Downtown Chicago through the South Side of the city. It is designated as both I-90 and I-94 south to 66th Street.

Well clearly if this was real, the mainstream media would be aware and picking it up right? Not just two random Trucking websites (no offense to Trucking Info and Transportation Nation).

Google as of 1:25pm Central Time is showing nothing for this besides these two postings. 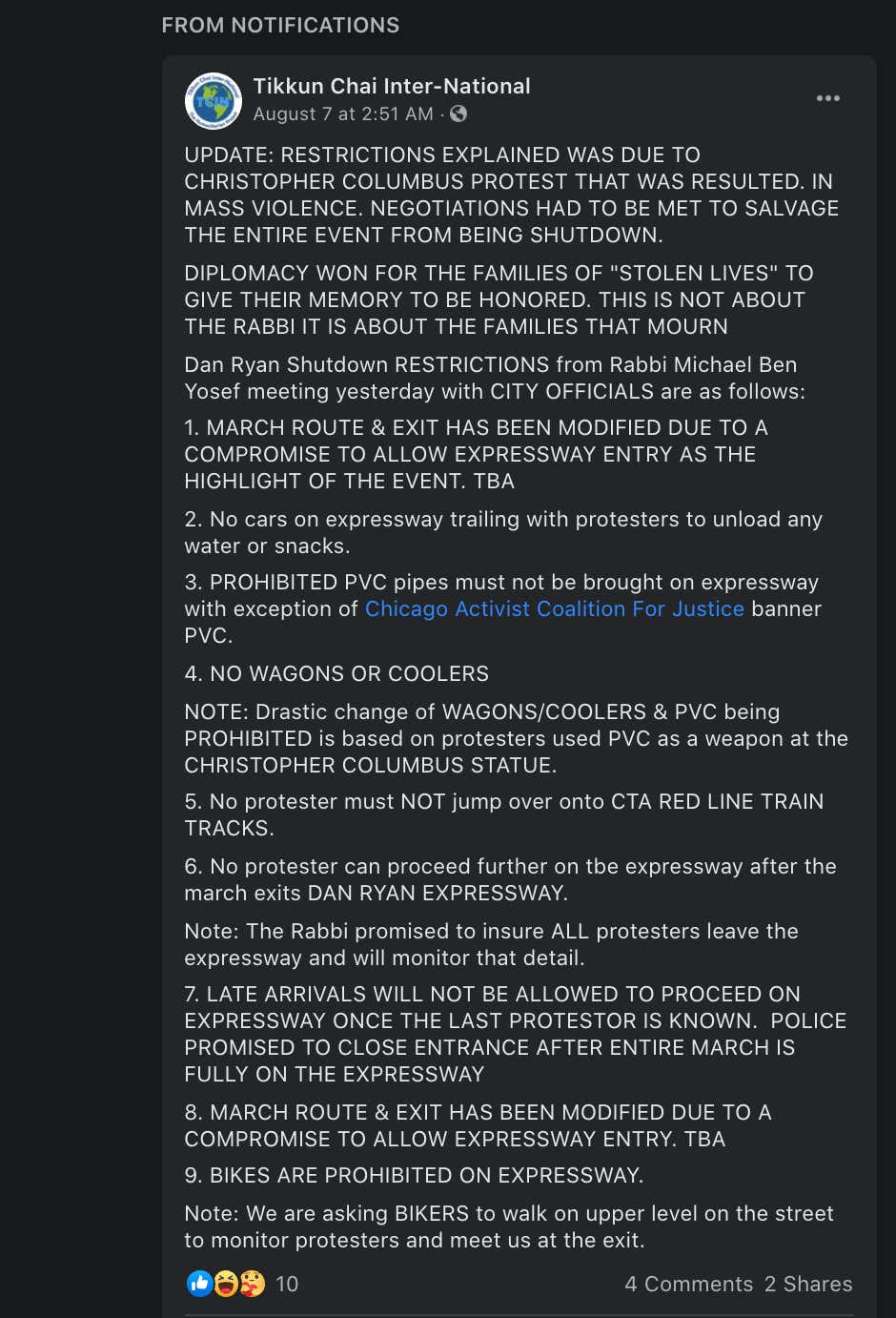 This has been public since August 7th apparently??? Last Friday. And there's been no mention by city officials to its citizens warning about this. No mention by the news about any of this. And it's going down in 3 days?

In all seriousness, WHAT THE HELL IS GOING ON OUT HERE?

City hall and Springfield are both keeping a watchful eye on small business owners and restaurants, that haven't already gone out of business, and that are barely limping by like starving dogs. Yet they have no clue (literally) or don't give a rats ass about mass lootings being organized right under its nose (all coordinated on social media) and is now allowing a group of potentially 25,000 to stand shoulder to shoulder to shut down one of the most important transit routes in the United States followed by who knows what? 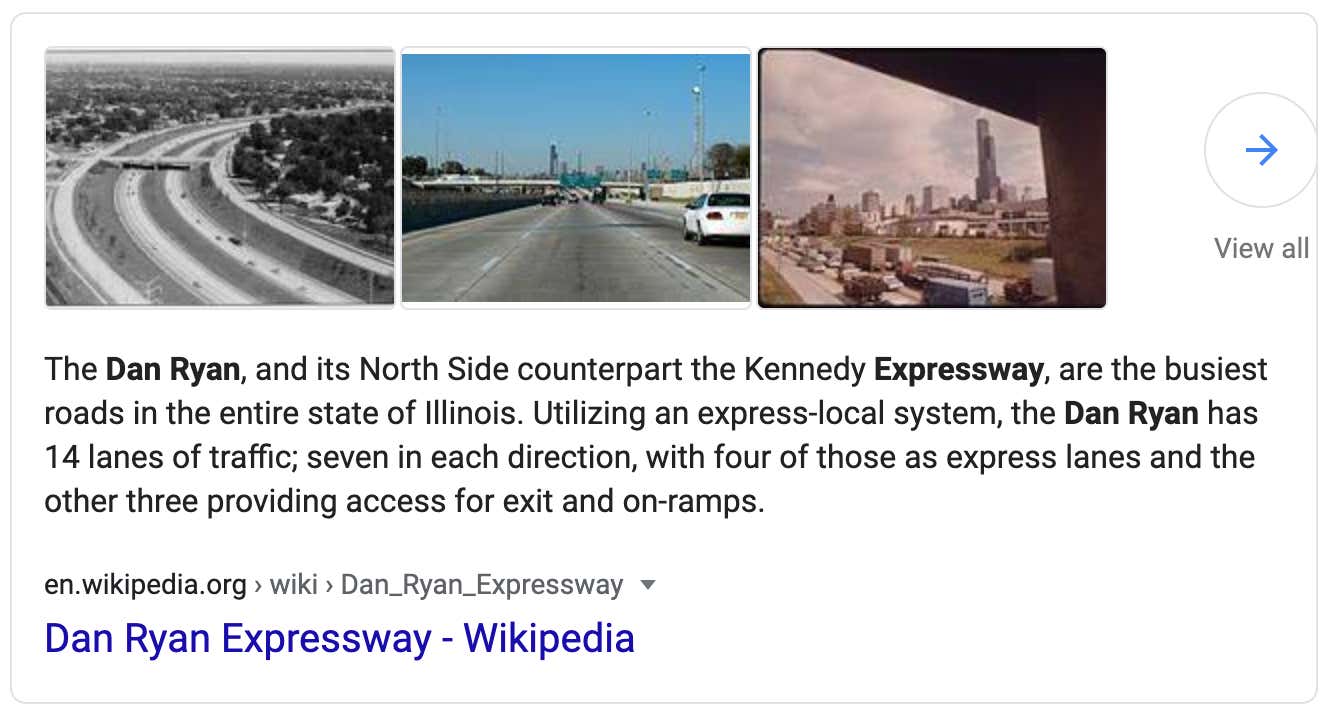 But mass gatherings of thousands of people in close proximity to disrupt travel and production lines? Good?

p.s. - Donnie is headed here this weekend. I cannot fuckin wait for him to get the true Chicago political experience first hand and to get his opinion on things in relation to Communist China. Should be high comedy.