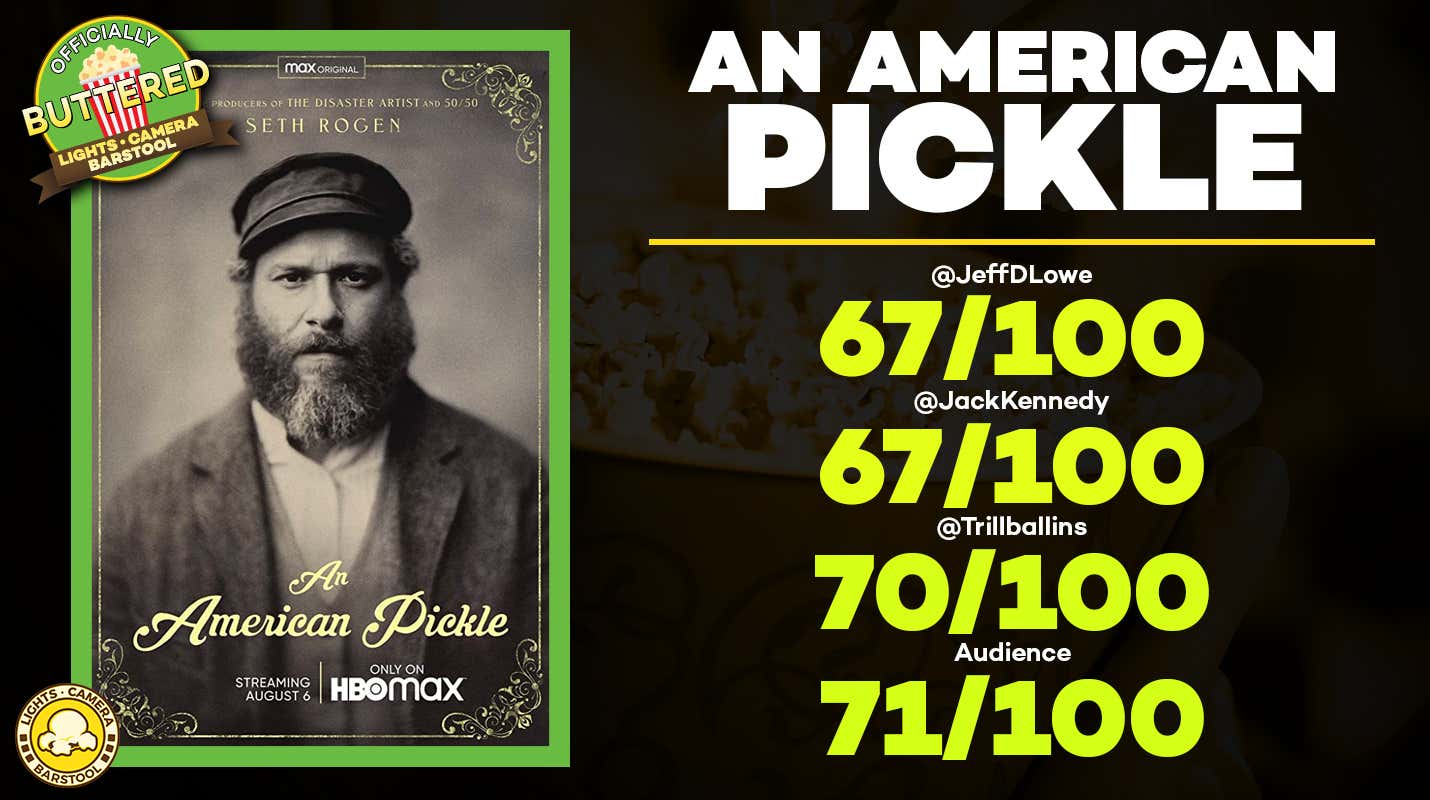 HBO Max has a new original movie. We watched it. Here is our review…

Preserved in pickle brine for 100 years, an Orthodox Jewish factory worker wakes up in New York City and tracks down his great-grandson.

JeffDLowe (67/100): A cool concept, especially with Seth Rogen in both lead roles, ‘An American Pickle’ has a few bright spots, but ultimately is far too weighed down by force references that feel dated and on the nose. Rogen deserves credit for his performances, especially of the older of the two characters, but this is far from the funniest script he’s been given.

I don’t think a comedy movie is bad if it hangs on humor that is incredibly cornered into a time period, let’s make that clear. Well-time scripts based on culture and the state of our society will always play. But when the majority of the movie’s punchlines and quips are specific to just a small time period, I certainly don’t look at it in a very positive way. ‘Superbad’ is a great example of a movie that will age well for eternity due to the type of humor used in the script.

Am I being unfair? Possibly, but here is the main issue with the point I am trying to make: the humor already feels dated upon release.

Brooklyn jokes? Running gags about there being all sorts of milk available in grocery stores? It’s low-hanging internet humor from five years ago.

What disappointed me the most was that there were plenty of small moments that showed a more unique side in terms of tone and humor. Seeing more of that would have really benefited the movie well. ‘An American Pickle’ has a ton of heart, so the serious tone was needed at times, but it was so much better when it toed the line of sight-absurdity (never go full-absurdity).

Other than that? Well, it’s just a decent comedy. It won’t wow you, but it won’t make you mad. Trillballins called it a long episode of ‘Black Mirror’ on our podcast. ‘An American Pickle’ is worth a watch, but don’t it expect it to be anything memorable once you turn the movie off.

KenJac (67/100): I really didn’t know what to expect going into this because the trailers didn’t reveal a ton outside of the general concept, which I was really hesitant on. That’s probably because I feel like movies with a person playing 2 characters have a higher chance of being bad. There are plenty of good examples but my brain goes to jack and Jill, cloud atlas, now you see me 2 and similar garbage. The movie taking place in Williamsburg, AKA the punching bag joke comedians in 2013 and Facebook dads today, wasn’t promising either.

I think the story ended up being kind of sweet, though! I wouldn’t call it heartwarming but there were a few “awww that’s nice moments.”, which is more than most movies can say. I also enjoyed 2 ways of how they depicted that immigrant generation compared to ours. I think most of us have parents and grandparents that come back to any complaint you have and with “oh you think that’s bad your great grandparents had to work sooooo hard to get by!!!”. This movie does speak on the fact that yes, that generation worked very hard and incredibly selflessly to secure a future for future generations they wouldn't live to meet. That generation was ALSO filled with extremely stupid, bigoted assholes. Two things can be true!

I think they also did a good job at swinging at the late gen x and millennial need for authenticity by any means necessary. Even if that means eating rainwater trash pickles because they want to keep up their image. Is that a played out joke? Yea, kinda. It felt at least a little bit fresher in this, though.

In the end, I didn’t really love Rogen as a lead. I think so far he’s at his best both comedically and dramatically when he is bouncing off someone else (not counting another version of himself). I also just didn’t feel like I got much out of the movie. I didn’t feel one way or another, just pure apathy after finishing just like in college.

--
The movie is Officially Buttered. You can head to Lights Camera Barstool right here to listen to our latest episode where we reviewed the movie in full.

Until next time, enjoy the movies.