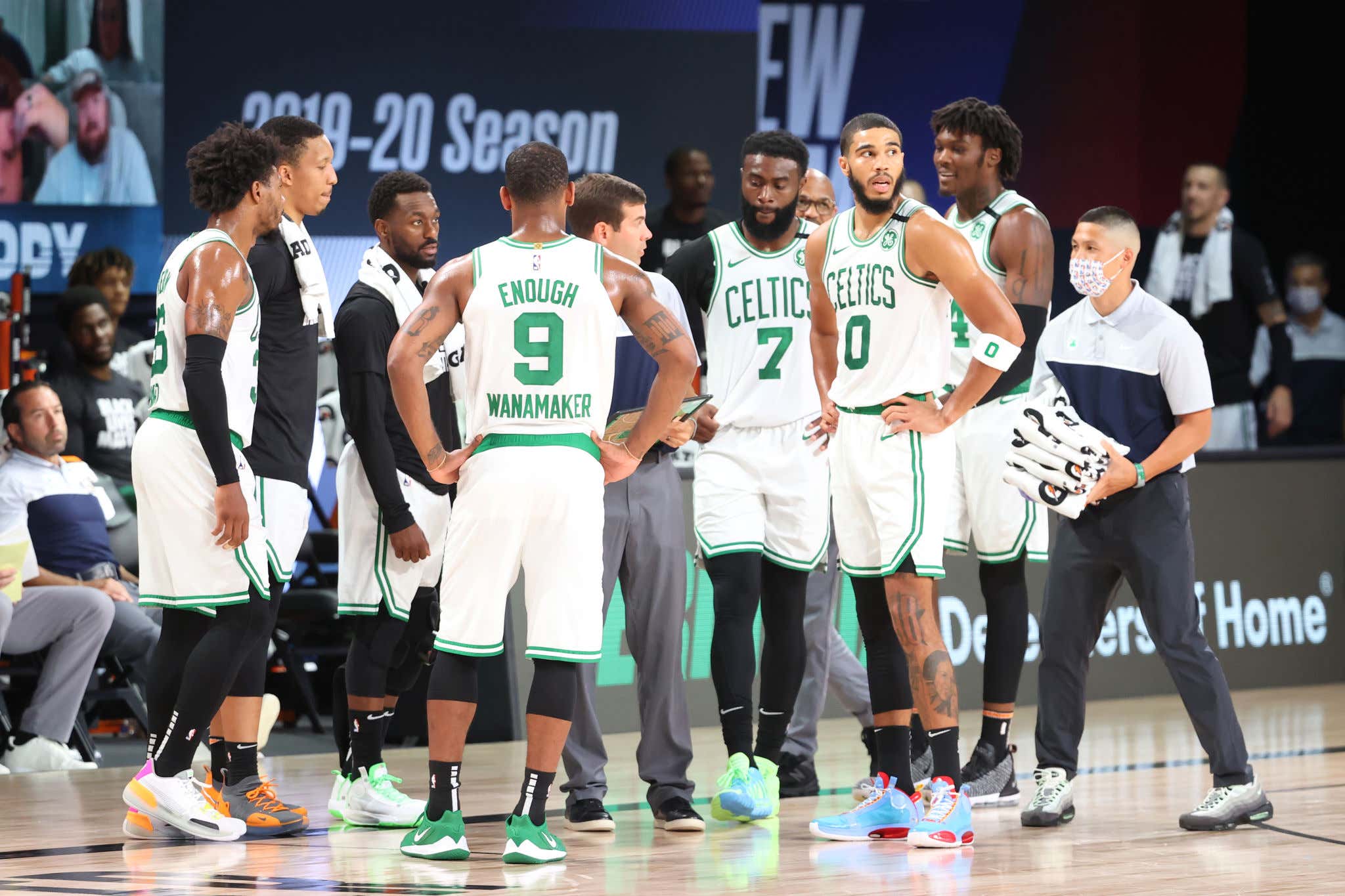 Alright so now that the Celts seed is locked up and the main rotation players are essentially done until the playoffs begin, I figured now was the perfect time to take a step back and take a look at everything we saw/learned about this team in their bubble experience. At the very least they'll finish 5-3, but the Wizards are 0-7 in the bubble so 6-2 is definitely on the table.

I want these 8 games to truly be a test leading into the playoffs. I want to play the best teams early while everyone will be going 100%. I want to see what this Celtics team is made of. Prove to me what we saw during the year wasn't a fluke and that you got stronger with this time off so by the time the playoffs roll around you are battle tested. The last thing any Celts fan should want is a cake walk through the 8 games into the playoffs. You don't learn shit when that happens. So the fact that the Celts schedule is tougher to start is perfect in my opinion.

Well, as we sit here together at the tail end of their bubble schedule I'd say that is exactly what the Celts were able to accomplish. They went blow for blow with MIL in a game that could have gone either way, they beat the fuck out of the Raptors while they were playing all their guys, they beat teams like POR and MEM that were motivated and playing for their playoff lives, and then they had that one stinker against MIA. This team isn't perfect, nobody should have expected them to win every game, but when you step back and look at their body of work I think it's fair to say that they backed up the caliber of play we saw before the hiatus. I think we learned a lot about their mental toughness and how they are approaching life in the bubble and for the most part that was great.

So what I wanted to do was help paint the picture of what exactly we saw in the 7 games the normal rotation players played in. Some of it was great, other things not so great and definitely have to be corrected by the time Monday rolls around. Let's get started

We are witnessing February Jayson Tatum

One of the big questions surrounding this restart was if Jayson Tatum could get back to the level we saw before the break. Even I was someone who didn't think that was possible because the dude was shooting like 48% from three. It was an insane level. Well, you'd be interested to see how things match up after his disaster performance against the Bucks.

That's February Tatum production folks. That insane level where Tatum looked to be a top 10 player in the league is what we're currently experiencing all these months later. I cannot stress how important that is for the ceiling of this team. I'm going to assume that efficiency comes down a little bit in the playoffs as teams tighten things up, but it's hard to not be excited with how Tatum is entering the postseason

Pretty simple here. The Celts started their reseeding games with some of the worst defense we've seen them play all year. After their first two games they had the 21st ranked defense with a rating of 117.9. Considering they were 4th in the league all year with a 106.6 rating, that was a drastic dropoff and rock bottom was probably the Miami game. Since then?

No surprise the Celts haven't lost since. Their effort on the defensive end was a billion times better and it directly translates to wins.

The same is true for their passing. First three games? The Celts were dead last in assists per game at just 19.0. The ball wasn't moving, too much isolation, just not how this team needs to play. Since the MIA game? They are 2nd in assists at 29 a night.

So you see it's pretty simple. If this team defends and moves the ball, they basically never lose.

Would you believe me if I told you that Marcus Smart has a higher Ortg (120.2) than Kemba, Jaylen, Jayson, and Gordon? When has that ever happened? Not only that, but his 21.8 AST% trails only Kemba who is at 22.1%. As long as he tightens up his defense, Smart is entering the playoffs playing some of his best basketball.

Points in the paint is a problem

If there's one thing the bubble showed us, it's that any type of big bruising big man is going to do whatever the hell he wants offensively. The Celts gave up 47.4 opponents points in the paint which is higher than the 43.6 they gave up before the break (3rd best). Looking at their playoff path of PHI/TOR/MIL, that's something to monitor and I wouldn't blame you if you were concerned. Maybe the answer is more Timelord minutes, but we did not see this team limit opposing bigs like we did during the year

All that is nice, but where Jaylen really stands out was his clutch play. In clutch situations in the bubble Jaylen shot 57/50% from the floor while taking the 2nd most clutch time FGA. This ability to knock down that corner three is so huge when it comes to attacking and drawing defenders. I trust Jaylen just as much as anyone on the roster to take the final shot in a big moment. He's shown he can make it.

To me, the final missing piece to Gordon Hayward being all the way back was his FTA. For him to be UTA Hayward, he had to be better about getting to the line. His FTr is just .207, down from .297 last year. Well, in the bubble Hayward was 2nd on the team in FTA at 4.8 a night. He was much more aggressive and you can see how much that opens up everything else for him. Considering he shot 86% from the line in the bubble these are easy points that will only help him get into a rhythm faster. Once I saw him actually looking for contact on his drives I knew we were watching a different player.

Did you know of any player in the bubble who has played at least 5 games, that the only players in the league who had a higher BLK% than Timelord was Boban and Bol Bol? Think about that for a second. Not only that, he also had the lowest Drtg of any reserve big on the roster. If this doesn't warrant legit playoff minutes I don't know what will.

I talked about this earlier today but I want to stress it again because it's so important. The Celts did a great job of keeping his usage low (20%), and Kemba responded with 14 points per game on 49/42% shooting in just 25 minutes a night. He passed the eye test, he passed the efficiency test, and everything we've seen suggests his knee is responding well to playing. His minutes ramped up with each game and he said this is the best he's ever felt. Huge sigh of relief there.

This was something the Celts really struggled with early in the bubble. Teams shot 35% from deep against the Celts which had them right in the middle of the pack. But as their defensive energy turned up, so did their ability to defend the three. To finish their run the Celts locked this down to just 26.8% which was the best in the league.

This is where guys like Tatum/Jaylen/Smart need to be effective moving forward. The Celts allowed the 3rd most wide open threes in the bubble which is a little concerning and they got a little lucky with opponent 3P% being just 34.5% which was the fourth lowest. Can't assume that will happen the playoffs so they need to be locked in here.

All in all, I feel pretty good about where this team stands heading into the playoffs. Even if things come back down to earth offensively, almost all of our worries heading into the bubble were addressed. Now it comes down to execution. This team backed up any sort of hype they might have as contenders, but this is the hardest part. It's one thing to talk about it, now it's time to be about it.

Given what we saw from the rotation players in the bubble, they look ready to do just that.