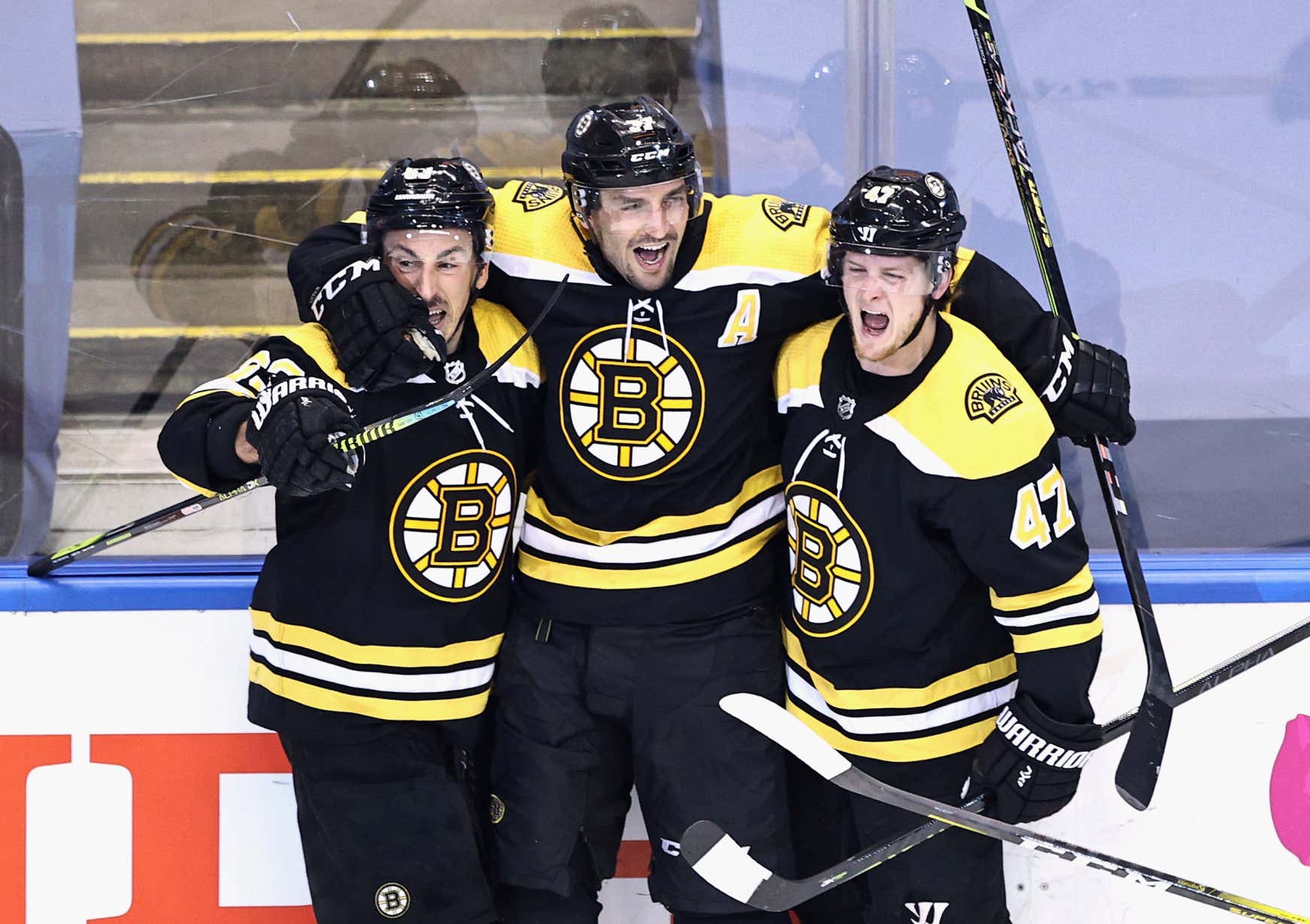 A minute and 13 seconds into double overtime Patrice Bergeron called game and beat Petr Mrazek after a beautiful set up from David Pastrnak and Brad Marchand. After a shaky round robin where they went winless and dropped to the 4th seed, the B's top line delivered to take Game 1 from the Carolina Hurricanes. Fuckin' right. Let's get into it.

Joel Edmundson opened the scoring with 6:58 to go in the 1st. Bad goal to give up for the B's, Nick Ritchie gave up on the play. Rask couldn't make the save moving side to side. Ugly all around. 1-0 Carolina.

David Pastrnak leveled the score at 1 after a great face off win from Patrice Bergeron and an even better feed from Brad Marchand. We've seen this play before. Tie game 1-1 after 1.

The B's took a 2-1 lead in the early part of the 2nd period after a crazy goal from Charlie Coyle. Carolina challenged for a hand pass, lost the challenge (it was ruled when Mrazek touched it it wiped it out) and the B's went on the power play after making it 2-1. Obviously should've been a whistle but wasn't and Coyle gets his first of the series.

Aaaaaand the fun ended shortly after when the Canes scored a shorthanded goal to make it 2-2. Not sure what Pasta was thinking. Brock McGinn with a sweet shorty breakaway goal evens the score. 2-2.

David Krejci regained the lead for the Bruins with this sweet dangle early in the 3rd. Ondrej Kase made it all happen after he got denied by Mrazek on the previous play.  3-2 Bruins.

Haydn Fleury from deep tied the game with a little over 10 minutes to go in the 3rd. Traffic in front of Rask. 3-3

Patrice Bergeron calls game in 2OT. Petr Mrazek lost his angle and Bergy buried it and the Boston Bruins have taken Game 1 from the Carolina Hurricanes, that give and go with Marchy and Pasta though…

- The Bruins lack of finish plagued them in Game 1 in regulation. Tons of chances but no finish, thankfully they pulled out the win in 2OT. Game easily could've been 6-3 B's after 3 periods of play.

- The top line looked more like the top line again today. In the 1st Bergeron won the draw, Marchand wrapped around and fed Pasta in front of the net. We've seen them pull off this play a few times and boy did that feel good for the top line to get one in the 1st after the criticism they faced in the round robin.  And of course we have to talk about the Bergy game winner…

- That is the top line at it's absolute best. SHEESH. That give and go. The 1st line will build off today's game and keep going.

- Uh ohhhhh. The 2nd line was absolutely buzzing today. Jake DeBrusk dented the post no less than 100 times but David Krejci was able to finish a goal created by Ondrej Kase, and looked like Playoff Krejci. He was by far the best player on that line. Kase took a dumb penalty in the first but redeemed himself and played better as the game went on.. Cassidy after the game said he thought Kase was fantastic today. This line is continuing to build their chemistry, watch out.

- Like I said, JD Couldn't buy a goal. Was visibly frustrated as he broke his stick as he got to the bench. 2nd line was buzzing but just couldn't finish. Game would've been long over if they connected on those chances.

- Charlie Coyle was a hounding the puck today. Bruce Cassidy alluded to it before the series that Coyle could play a major factor in this series. Like Krejci, he started his playoff on the right foot. Nick Ritchie seemed lost at times, I wonder if Karson Kuhlman or even Jack Studnicka would be better suited on that line for a game or two until Ritchie finds his footing.

- Wrote it in my preview blog but I'll say it again, Sebastian Aho is a god damn problem.

- Joakim Nordstrom and the 4th line came to play. Nordy was a shot blocking machine, he led all forwards with 5 shot blocks, and DAVID PASTRNAK was 2nd in forwards with 4 blocks.

- Ugly sequence as David Pastrnak fumbled the puck and Brock McGinn buried a shorty breakaway goal in the 2nd to negate their lead. B's PP was a thorn in their side today, lots of chances but no dice. Nearly 'decline the PP' territory. Just awful, the Canes do stack the blue line to try and thwart entries but woof. Needs work.

- Zdeno Chara looked his age at times today. A few sloppy turnovers. But Charlie McAvoy was by far the best defenseman. All over the ice, got dinged in OT but returned. He almost makes you forget about Z's misplays.

- Sami Vatanen and Justin Williams were unfit to play for Carolina. Dougie Hamilton returned. Ryan Dzingel slotted into the lineup for Carolina.

- Wasn't the sharpest game from Tuukka Rask (25 saves on 28 shots). First one he would've liked to have back, second one a breakaway shorthanded, third one had traffic in front but was a long wrister. Not the best but not the worst, kind of a wash performance. With a back to back I wouldn't be surprised if Halak is in net tomorrow. Bruce Cassidy says no decision has made yet.

This. Like fuck, that felt good. B's are back TOMORROW at 8pm for Game 2. Right back at it.