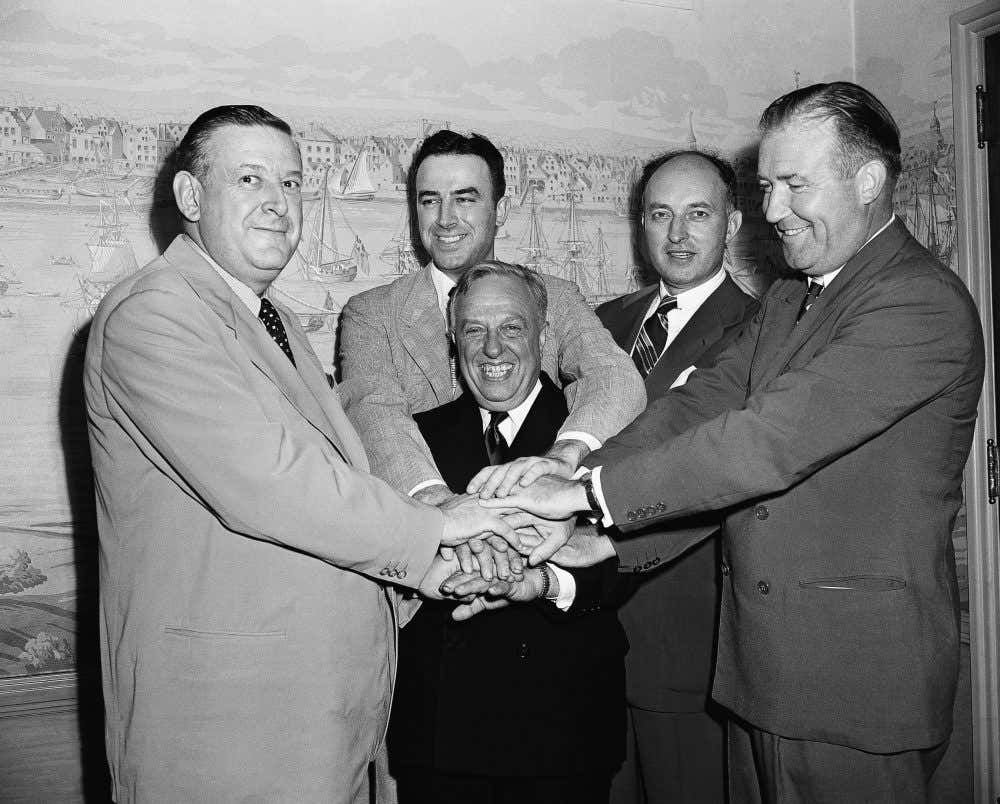 Following World War II, the sporting world was ready for a professional basketball league. The sport was still in its infancy, having been invented by Dr. James Naismith at a YMCA in Springfield, Massachusetts in 1891. The sport had already been evolving from peach baskets to nets and from small gyms to cages and on to arenas. The Basketball Association of America had been founded by arena owners looking for more events to fill their buildings following the war. The BAA was the first big league basketball league with teams in Boston, New York, Philadelphia, and Chicago.

The National Basketball League began play in 1937. It was more typical of an early professional basketball league. The Midwestern Basketball Conference had preceded the NBL. The NBL played in smaller gymnasiums and had been filled by industrial teams, such as the Fort Wayne Zollner Pistons and the Toledo Jim White Chevrolets.

Due to the small nature of the NBL, it was clear that the BAA was the more solvent league, with the backing of the big arenas like New York’s Madison Square Garden. On year before the merger, teams from the NBL began to defect to the BAA. These teams were the Indianapolis Jets, the Rochester Royals, and the Fort Wayne Zollner Pistons, along with the Minneapolis Lakers, who won the 1949 BAA Championship.

The loss of the Lakers, in particular, was a death knell for the NBL, as they had the top player of the era George Miaken and took him to the BAA. Following the 1948/49 season, the NBL and BAA began former talks about a merger to create a super basketball league. The leagues held meetings at the Empire Building, with the BAA President Maurice Podoloff leading the discussions. Six NBL teams would join with the ten BAA teams and formed the National Baseball Association as the two leagues merged into one. The BAA had two teams (Indianapolis Jets and Providence Steamrollers) fold following the 1948/49 season.

Going forward, the NBA recognizes the BAA years as part of its history. The NBL is mostly ignored. The six teams that joined from the NBL (Anderson Packers, Denver Nuggets, Indianapolis Olympians, Sheboygan Red Skins, Syracuse Nationals, Tri-Cities Blackhawks, and Waterloo Hawks were regarded as expansion teams. Most of the new teams were unprepared to compete in the new league, as the NBA and the league were not prepared for the new teams. As a result, six teams were gone after one year, with the St. Louis Bombers and Chicago Stags, who had been the BAA folding. Also folding was the Denver Nuggets, while the Anderson Packers, Sheboygan Red Skins, and Waterloo Hawks jumped to a smaller league.

It continued to be a struggle for the NBA over the next five years, as the Washington Capitols folded 35 games into the 1950/51 season, while the Baltimore Bullets folded early in the 1954/55 season. None of the NBL teams exist in their current markets as they all moved on to bigger cities. These include the Minneapolis Lakers who moved to Los Angeles; the Fort Wayne Pistons moved the Detroit, the Syracuse Nationals who became the Philadelphia 76ers, the Tri-Cities Blackhawks who became the Milwaukee Hawks before moving on to St. Louis and Atlanta. The Rochester Royals also had vagabond experience moving on to Cincinnati before becoming the Kansas City Kings, and later the Sacramento Kings.