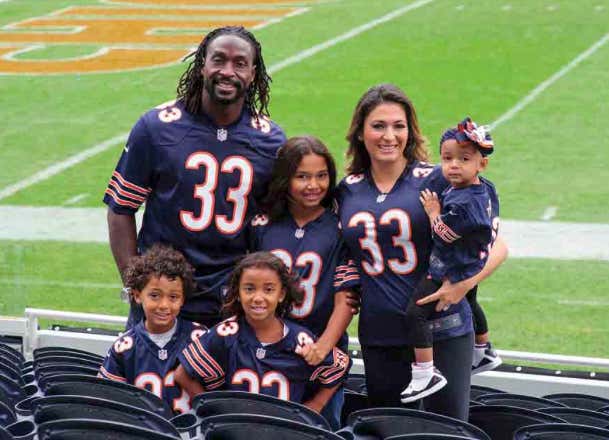 [Troy McClure voice]: Hello. This is Charles "Peanut" Tillman. You might remember him from such moments as his 12 years cornerbacking for the Bears or his one with the Panthers. Or his All Pro season. Or his nine career defensive touchdowns. Or his season with an NFL-record 10 forced fumbles, mostly due to his own invention, the Peanut Punch:

Or perhaps you remember him retiring in 2015 and becoming a duly licensed federal agent.

The Sporting News - Former Pro Bowl cornerback Charles Tillman has graduated from the FBI's Training Academy in Quantico, Va., and is now an agent, Sporting News has learned.

The 13-year NFL veteran entered the 20-week program last year. … Tillman's family couldn't be reached, but a source close to the situation said on the eve of Tillman's 37th birthday, "He is currently working for the FBI. (He) has his badge and everything."

Or perhaps you just see him on FS1. Though based on their ratings, you can be forgiven if you don't.

But how about this, to jog your memory?

For sure the brave men and women of Roger Goodell's intrepid Pee Patrol don't remember any of those things, as evidenced by the email Tillman got.

Sure, you might be a former Walter Payton Man of the Year Award recipient, a duly-licensed federal law enforcement official and out of the league for five years. But that doesn't help you escape the long arm of the league's Urine Squad. When they want you to whip it out and fill a cup, by God you don't ask "Why?" You ask "How high? While you reach for your zipper. If you know what's good for you.

A multi-trillion dollar industry that can't keep its personnel records up to date or even know one of its best players circa 2003-15. And these are the guys we trust to get it right every time a player tests positive and loses a quarter of a season. Or more. Maybe they need to start testing whoever is in charge of the testing. Or better yet, that obtuse, dry mouthed, empty-suited, dimwitted twat they pay $40 million to for running this half-assed clownshow.