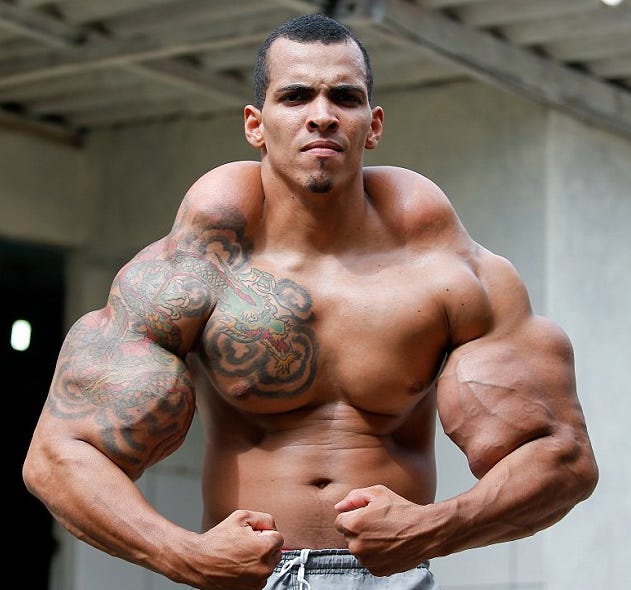 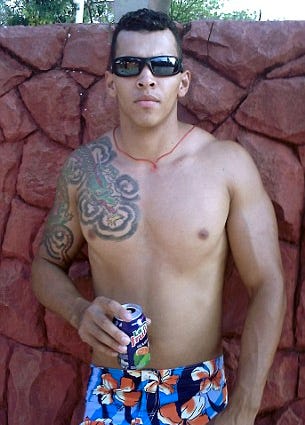 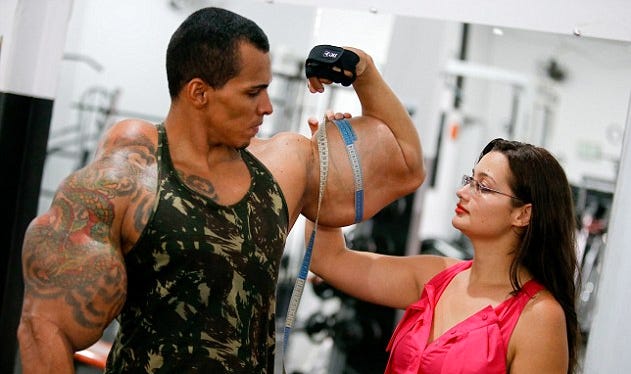 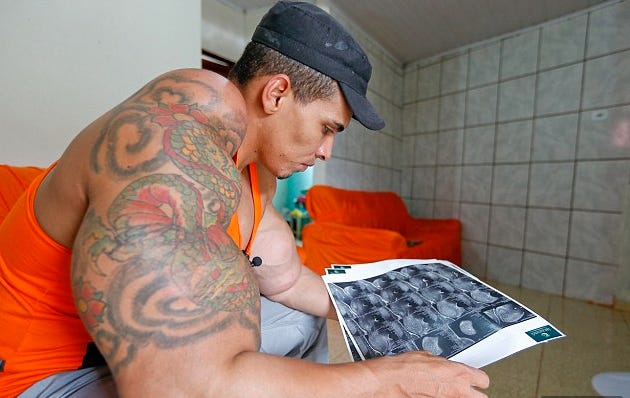 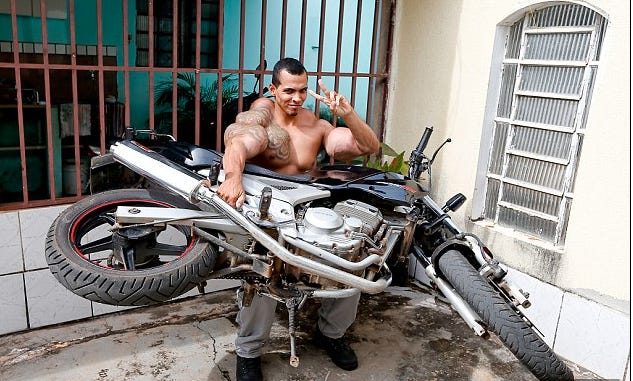 Daily Mail - A bodybuilder who modelled himself on the Incredible Hulk risked his life by injecting oil and alcohol into his arms – and almost had both amputated. Father-of-one Romario Dos Santos Alves, 25, used the potentially lethal cocktail to pump up his biceps to 25in and he now faces a catalogue of serious health issues. The former bodyguard said using the synthetic filler synthol cost him his sanity and nearly his life as he tried to kill himself when his wife was six months pregnant. He said his swollen muscles terrify children in his hometown of Caldas Novas in Brazil and they call him a ‘beast’ and a ‘monster’.  ‘If you take it once there will definitely be a second time – it’s addictive,’ he said. ‘I remember the doctor told me that they would need to amputate both arms – they said everything in there, all my muscles, were rock. ‘I want other people to see the dangers, I could have died all because I wanted bigger muscles. It’s just not worth it.’  ‘My muscles started to solidify and I couldn’t even inject my arms – they were full of rocks,’ he added. ‘I decided the only thing I could do was buy specialist needles to inject. ‘The kind of needles used on bulls – there are no stronger needles around – I know it seems stupid but I had to get my synthol fix.’  Now Romario’s bizarre appearance generates mixed reactions from people in his hometown. He said: ‘One time I was working in a catholic church and a woman came up to me and said that her 12-year-old daughter wouldn’t come in because she was afraid of me. ‘She said that she thought I was a beast, a monster – I just put my head down and didn’t say anything.

Boy does this guy feel like a fucking idiot. Hey Romario Dos Santos Alves, havent you heard bro? Dadbod is IN. You and your dumb ass alcohol rock arms are OUT. I’m glad you can lift a motorcycle with one hand but guess what? You almost got your arms chopped off and it was all for nothing. Marshmallow beer bellies make the pussy wet in 2015. Boulder arms turn pussy into the Sahara. You’re like the over achieving asshole at work who comes in early and stays late and kisses the boss’ ass, meanwhile we’re all still getting the same paycheck. I sit on the couch and watch Netflix and have a little bit of a muffin top along with two unassuming arms but at the end of the day those arms are not in danger of being amputated and chicks will definitely want to fuck me over you. Way to go idiot. You wanted to have muscles so badly that you actually turned yourself into a beast that scares children in public. No sympathy here from King Of The Skinny Fat. Its almost like I’m the tortoise and he’s the hare. Except instead of just losing a race this guy actually turned himself into an inhuman monster.