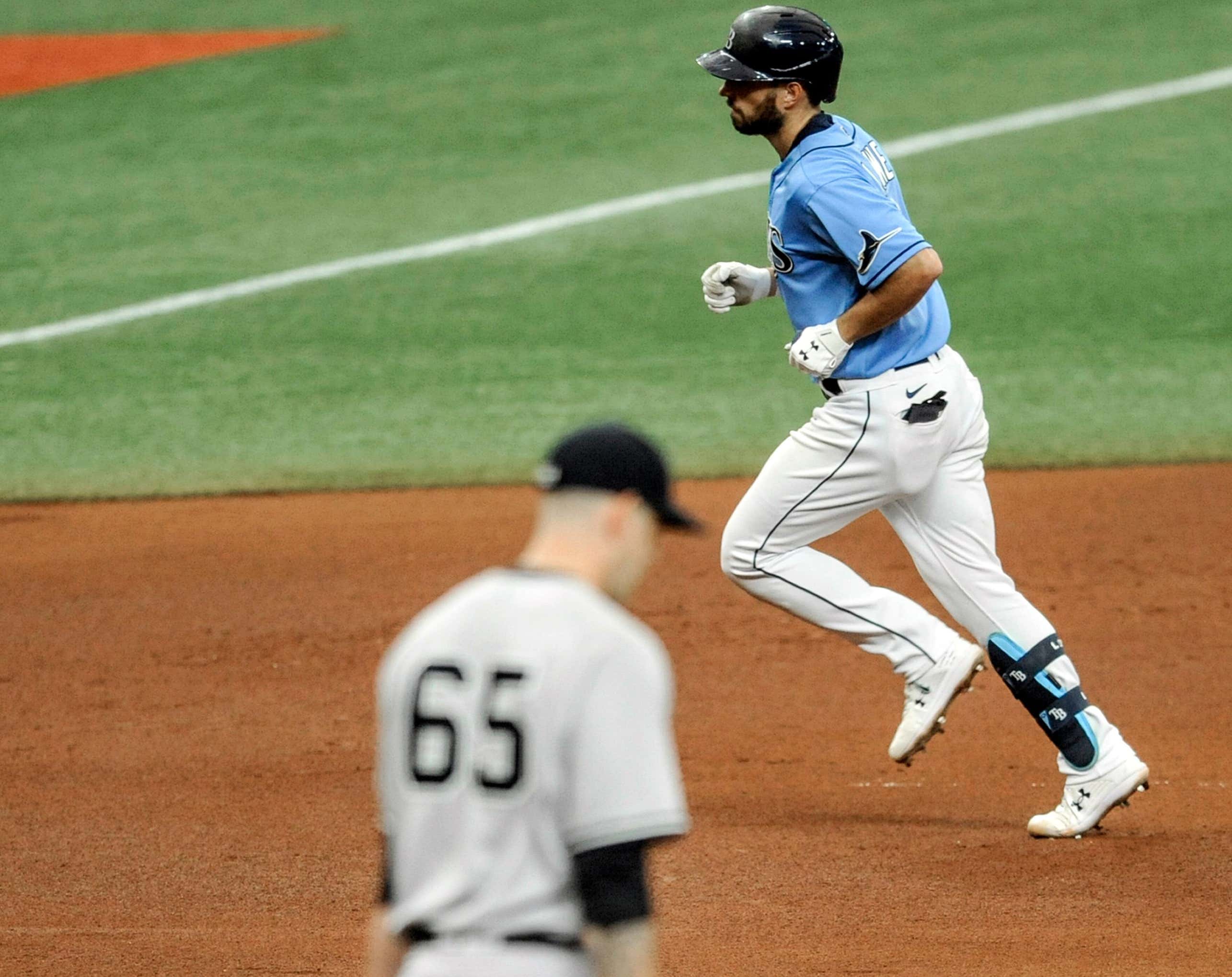 I sit here midday Sunday quite hungover and still at a loss for how the Yankees lost today's baseball game. James Paxton was untouchable for six innings while the Yankees built themselves a nice 3-0 lead with 9 outs to go. A split of their tight series with the Rays looked like it would become reality in just a few innings. Then shit hit the fan like it has pretty much all week for this team.

Paxton came out in the 7th looking flat. Martinez ripped a 2-0 fastball to lead things off. That was followed by a 1-0 fastball being blasted by Brousseau. I feel like with how Paxton has pitched all year that's when you pull him. When you go from untouchable to giving up ropes that's generally a tell tale sign you've lost your stuff. You take your 6+ innings, 11 strikeouts, two runs from your struggling pitcher and get him out of their still in line for the win. I get that you had a doubleheader yesterday, but with the off day tomorrow you don't really have an excuse with over-using guys. I'm never one for advocating a Jonathan Holder appearance earlier than it happens, but pulling Paxton there seemed like a no brainer. Boone opted to let him keep going and this happened.

Sick. Just awesome. Go from a cruising win behind an amazing James Paxton to letting all of the shit hit the fan. Super duper.

The bats would go quiet for the remainder of the game, not even getting a base runner to threaten with. To be honest they weren't all that great to begin with. Their three runs on Sunday came on a hit by pitch and a dropped fly ball in center field. Facing Trevor Richards for four innings after Morton left early and that's all you come up with? Entering this game, Richards had given up more runs than innings pitched on the season. Come on man.

In the 9th, Brosseau smacked a leadoff double, but was thrown out next at bat on an amazing heads up play by Gleyber. He gets a lot of slack for his defense, but this was a fantastic play by the Yankees shortstop.

You'd think that kind of play would spark a team and lead them to a great victory. Something you can look back on as a great moment to split a tough series and get some momentum. Nope. Lowe would get to second on a spiked sinker into the ground, move over to third on a grounder, and came around to score on Michael Perez's walk off single. Ball game.

Guess how many hits Michael Perez had on the year before that at bat? The same as you and I in fact! Zero. Shoot me in the fucking face.

After starting the season 8-1, the Yankees have now dropped 5 of 7. Their record stands at 10-6 which isn't all that impressive anymore. It's certainly fine, but with every day that passes it gets more and more alarming. Boone's had a rough week of decisions and this bullpen is spent. I'm not overly pleased at the moment if I could be frank.

The good news? James Paxton looked like the guy we saw in the second half of the season last year and even got the velo back up to 94 on some heaters. It's still not where you want it, but that plays better than 91 no question. Get him back on track, keep Gerrit Cole alive, ride Masa, and delete JA Happ from existence. Oh and for the love of god call up Clarke Schmidt. The rotation isn't as bad as it's being made out to be when you add Clarke to the mix.

Also good news, the Yankees have an off day Monday and Thursday. This bullpen needs the rest with how much of a toll it's taken given the absence of Kahnle and Chapman. Speaking of Aroldis, I imagine he'll be back by the weekend for the Red Sox series which will be massive. That would allow Britton to go back to the 8th while Green and Ottavino for the 6th and 7th. The Yankees need Chapman back big time to get back on a roll and steady the ship.

Oh and finally did I say call up Clarke Schmidt already? Just fucking do it. What are you waiting for? Call up Clint Frazier too while you're at it and put a jolt of life into the offense. Stop having these guys just sit in Pennsylvania doing nothing. It makes zero sense.