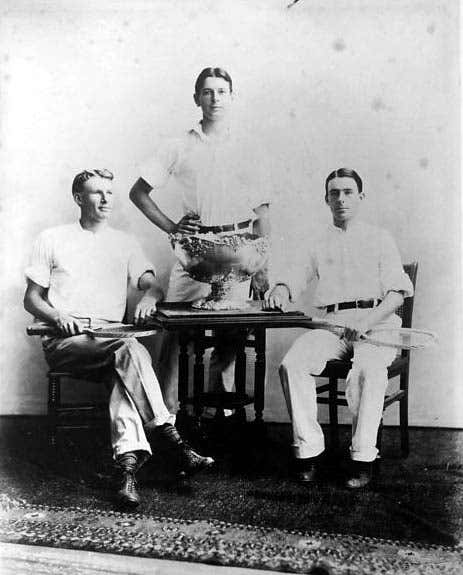 The idea of an international team tennis challenge had been around for years. In Europe, teams from the British Isles had faced teams from France. The USA wanted to get their foot in the door and join the elite tennis stage. Dwight Davis was in attendance when England competed in a tournament in Canada and began to devise a plan to bring a similar tournament to the United States.

Dwight Davis was born on July 5, 1879, in St. Louis. A champion level tennis player, Davis attend Harvard, where he became the American intercollegiate champion. He played in two US Nationals finals but never won a major singles title. Dwight Davis did win three doubles title in the US Open, teaming with Holcombe Ward.

Looking to increase the USA’s presence on the world tennis stage, Dwight Davis devised a tennis challenge to the British Isles. Davis was the driving force for the problem and purchased a Sterling Silver Trophy to be awarded to the winner of the challenge. The cup would go to the winner of a series of five matches between the United States and the British Isles.  The American team was Dwight Davis and two Harvard teammates, including his doubles partner Holcombe Ward along with Malcolm Whitman.

Dwight Davis took on British Captain Ernest Black in the first match of the tournament. Davis lost the first set but rallied to take the next three to win the match in four sets 4-6, 6-2, 6-4, 6-4. Malcolm Whitman meanwhile won in straight sets over Arthur Gore 6-1, 6-3, 6-2.

After winning the first two matches, the United States just needed to win one more match to clinch the Challenge Cup. Dwight Davis teaming with Holcomb Ward, faced Ernest Black and Herbert Roper Bennett. All again, the Americans dominate, winning in straight sets, 6-4, 6-4, 6-4. Davis was to take on Arthur Gore, and Whitman was to take on Black, but the final two matches were abandoned with the USA assured of victory.

The International Lawn Tennis Challenge became an annual event in 1902. It was not held in 1910 and paused during both World War I and World War II. Following World War II, the tournament was renamed the Davis Cup in honor of its founder, who was a big part of the United States victory in 1900. Davis, after his tennis career ended, became an attorney and had a career in politics, serving as the US Secretary of War from 1925-1929 and later serving as Governor-General in the Philippines.