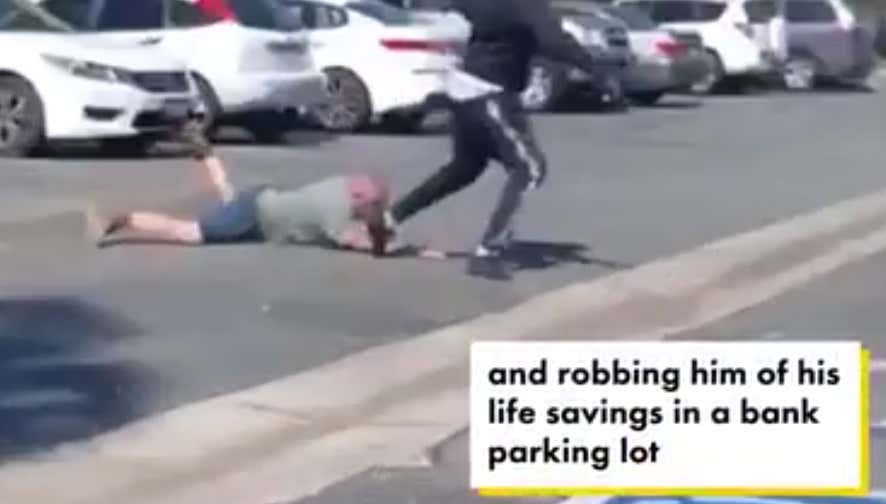 NYP - He was fighting for his life savings.

A California man was filmed as a crook beat him and swiped $200,000 — his entire life savings — in a bank parking lot last week, a local TV station reported Thursday.

Francisco Cornejo withdrew the cash from a Chase Bank in Huntington Park on July 30 following the sale of his home. As Cornejo approached his car, the at-large thief grabbed a satchel containing the money, according to KTLA-TV.

Soleimani said Cornejo hadn’t told anyone he was making such a large withdrawal that day.

“We don’t have any information to insinuate that this wasn’t random, but it just seems like a very big coincidence — how exactly did whoever involved know what was going on, or how he was coming out at that exact moment?” Soleimani said.

Why is it you can still get away with pretty much anything at a bank? It still baffles me that in the year of our lord 2020 people get away with robbing banks every single day. I'm not saying they encourage it, but the banks are wearing size 6 skinny jeans sometimes. Like "come on in, take our money, we have so much of it we don't care at all!".

So it doesn't shock me that there is some shady business going down in the bank parking lot. At first I was thinking "is it possible, perhaps, that this is the luckiest robber in the world?". But that's just impossible. There's no way a man woke up that morning and decided to rob the next person he saw in the parking lot…and that person happened to have $200,000 cash on him. Nay. As much as I'd love for it to be the world's luckiest robber, it in no way seems earthly possible.

So what is it?

It's an inside job. My gut is telling me someone from inside the bank tipped off his boy. Sent one quick text "yo some old dude is about to walk outside with $200k in his bag, get here ASAP". It's not quite Oceans 11, but that was a hell of a smash and grab and getaway. Seems like he knew exactly what he was doing.

Is it possible someone within the bank was in on this? That's my best guess right now. The other possibility is he owed someone a ton of money and they had been following him, waiting for this moment. Not out of the realm of possibility either. Or of course the aforementioned world's luckiest robber, which I hope so much to be true, but it just can't be. Nobody can possibly be that lucky.

But I am pretty fascinated by this case. I hope it's as inside-job as I want it to be. Or maybe there's another layer to it I can't even think of? If I remember I'm going to keep following this story, need to find out what happened…if they ever find out.