Welcome to your Weekend WNBA Betting Guide, where we'll be betting and (definitely) winning on the WNBA all season.

Big ups to those who realize making cash knows no gender; go ahead and make fun of betting WNBA games all you want, but it shows your idiocy that just because you don’t like women (because they don’t like you) you refuse to make money off these ridiculous lines.

Last weekend, after a bit of a rough start (due to Sabrina Ionescu’s injury, which unfortunately looks like it may cost her the season) we righted the ship and ended up making money by Sunday.

There are three games Friday. The first pits the red hot Minnesota Lynx against the Indiana Fever. The league-leading Lynx had Bridget Carleton, a forgotten forward, break out for 25-7-3 after replacing injured center Sylvia Fowles in the lineup in a blowout of the Liberty and look to be a VERY solid team. The Fever broke hearts on Wednesday against L.A. when the Sparks’ Riquana Williams hit an ABSURD 26 foot three with 8.4 seconds left to screw the Fever +8 bet. Not happy. While the Lynx started out as a small favorite on the opening line (blew up by mid-morning), the line moved to 5, which is enough for me to take the Fever as a dog.

The second game pits the hapless New York Liberty against the Washington Mystics. The Liberty without Ionescu are lost and although they can keep a game close for a half, they absolutely can’t stay with anyone in the second half. Don’t be scared of giving away double-digit points to them, although 14.5 is a SHIT TON. Washington is healthy so they should cover, and with ease (another under to look at -- Liberty just can’t score enough).

The third game is an intriguing matchup between the L.A. Sparks and the Las Vegas Aces. This should be a damn track meet. L.A. is somewhat hamstrung because Nneka Ogwumike is out, and her 13.2/4.8/1.2 will be missed. Vegas is coming off a nice win over the Mystics, led by A’ja Wilson’s 20. Look for Vegas to beat the Sparks in a tight game, but L.A. to cover because +7 is just too much to lay.

So there’s your Friday slate of games. I’ve been giving out picks in the chat on Walk The Line (6-3 WNBA this week NBD KBD) so hop on in if you want and mid-week plays.

I'll update this blog over the weekend, and as always, you may hate the WNBA with the same fire that you hate your ex who cheated on you with your cousin at that kegger at Jimmy’s farm. Always remember, though, these women can MAKE YOU CASH.

Below are updated late morning odds. Some movement from opening lines. 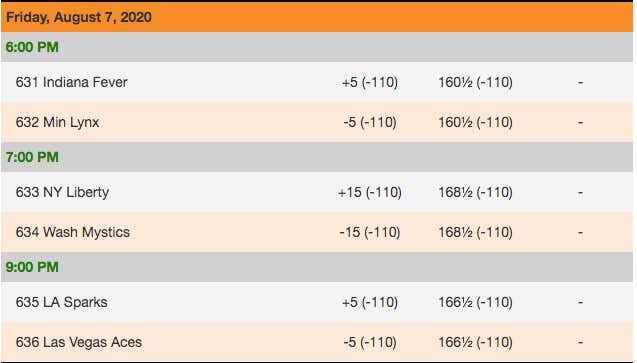 In a shocking development last night, the damn New York Liberty, a +15 point dog, didn’t just cover against the Mystics, they won OUTRIGHT 74-66. It’s one of the biggest upsets not just in the WNBA but in sports all year. Apparently the team held an emotional meeting ahead of the game.

WOULD HAVE BEEN NICE TO GET A MEMO COACH HOPKINS. And although it SUCKS to lose a game like that, I’ll take it over a bad beat any day of the year. Taking the Sparks as dogs without Ogumwike was a risk but it paid off in the late game to salvage the night.

Atlanta plays Dallas in the opener in what is essentially a pick ‘em game. Dallas has been a bit of a gambling nightmare, they’re an inconsistent team that’s as likely to put up 70 points in a game as 100.

The second game is Phoenix v Seattle in what should be the best game of the day. The Storm have played without Sue Bird and she will be out again today, while Epiphany Price is questionable. Both big losses. However, this team is DEEP. That being said, they didn’t pay the penalty in the last game for losing two starters, I think in this game they do.

The final game of the day is Chicago vs Connecticut. Connecticut is 1-5 and the Sky are 4-2 but the game is nearly a coin flip. Welcome to the WNBA. You’re instinct is to take the better team, but Chicago can be very sketchy at times and Connecticut is not nearly as bad as they seem. This is a classic trap game. I’m not touching this with a ten foot pole. If you have to bet it, take the over.

Go out there and stack some cash on the WNBA but remember -- there are no guarantees in life. The New York Liberty just proved that once again.

What a difference one point makes huh? Burned at the buzzer. There were 15 points scored in the final minute of the Phoenix vs Seattle game but it ended up being a 74-68 Storm victory when we had Phoenix +5. Not a bad beat per se, but it certainly didn’t feel good. We’re on to Cincinnati as they say.

In a marquee matchup that plays on ESPN, the Minnesota Lynx take on the L.A. Sparks in the 3:00 game live on ESPN2. Minnesota has the best record in the WNBA and are playing great and the Sparks are playing without Nneka Ogwumike (Chiney having opted out this season). This is a bit of a trap game. I think the opening line of L.A. -6.5 is a LOT. The u/o is 159 though which is even more tasty. I’ll take the O on this one.

The second game is Las Vegas vs the New York Liberty, fresh off their first win of the season on Friday night. Some idiot in the comments said, “Calling the New York Liberty winning a regular WNBA basketball the biggest upset across all of sports, all year is the most absurd thing I have heard in a long time.” LOL sometimes people are just so stupid it’s hard to believe they’re allowed in public. First of all, I didn’t say it was the biggest, I said it was ONE of the biggest. I remember when I first learned to read, too. Second, this dude is obviously not a gambler, where it DOESN’T FUCKING MATTER if its playoffs or regular season or pre-season. Upsets are upsets if you have money on the game. The Mystics were -1600 favorites and LOST OUTRIGHT. It was almost the exact same odds as the Dolphins being +15.5 against the Patriots in 2019 and winning outright, which nearly everyone proclaimed the biggest upset of the year. With thousands of games in a given year, I’d bet there aren’t 40 losses like this. So yeah, it was a huge upset. These boys out here chumps. If you’re going to shit post at least stop looking like such an idiot.

This game I do not like the Liberty to repeat their short-lived success. They’re 10.5 point dogs and should play like it.

The final game of the slate has the Washington Mystics (who got their doors blown off by the Liberty) vs Indiana. The Fever are a bit of a mystery as you can never quite tell who’s going to show up. This is an odd game, but the Fever are beat up -- Natalie Achonwa and Stephanie Mavunga are out and Victoria Vivian still has lingering knee issues. And it’s hard to believe the Mystics will shit the bed twice in a row. They’re -4.5 (up from the opening line) but that’s still a decent bet. The o/u on this game is 169, which I think is a tad too high and much more of a sure thing compared to taking either one of these inconsistent teams.

Thanks for riding with me for another week, even the knuckleheads in the comments. Guess what? Win enough money betting the WNBA, burnerszn, and maybe a woman might actually make you a sandwich.

See you kids next week. I’ll drop mid-week WNBA picks in the Walk The Line comments so drop by and drag BWalk with me. 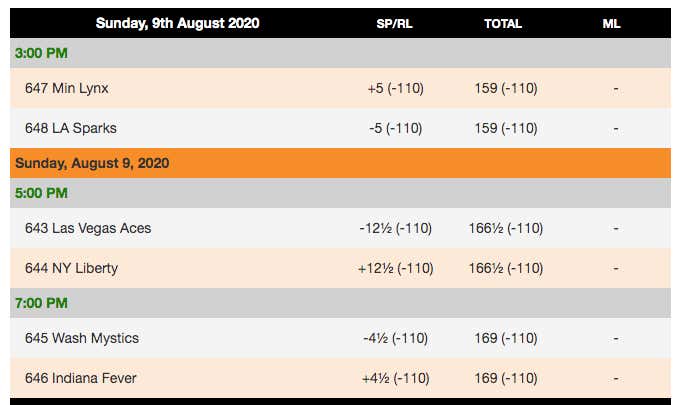