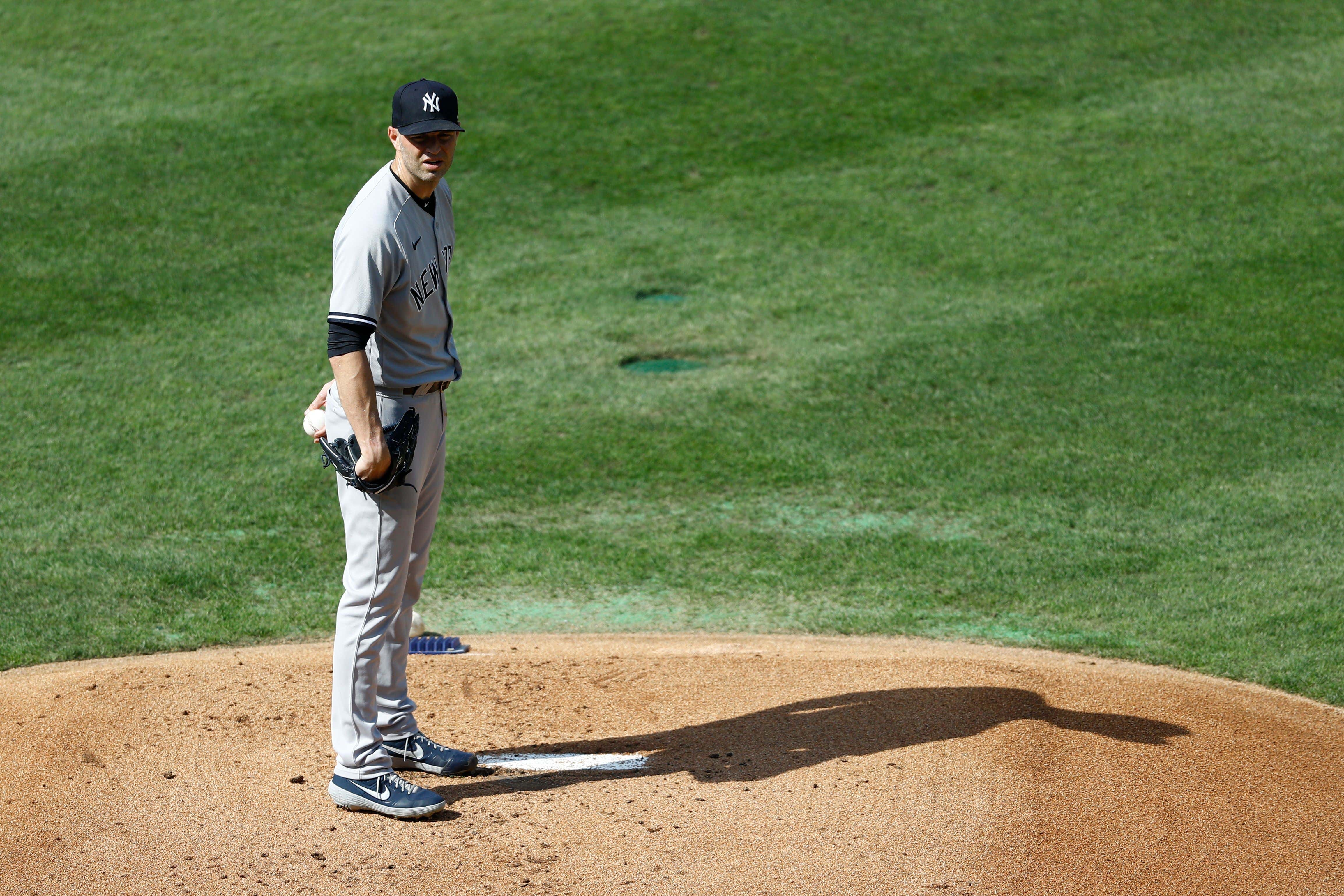 The Yankees wake up this morning 9-3 and in first place in the AL East by four full games. 12 games into this bizarre 60 game stretch you absolutely sign up for that record with no questions asked. If you asked any Yankees fan before the season they probably expected a 6-6 or worse start given how this team usually opens out of the gate. Now 9-3 is awesome don't get me wrong, but there's a clear weakness to this team that has people worried: the starting rotation.

Gerrit Cole is 3-0 in three starts with a 2.55 ERA. Awesome stuff. Everything you could have asked for from your horse. On the flip side, Yankees starters not named Gerrit Cole are 1-3 with a 7.22 ERA. Bad. Those starters in those nines games have gone into the sixth inning just once. In a season where games are so jam packed next to each other and minimal off days exist, those short outings will kill a bullpen. The Yankees have already been short handed on that end with Kahnle going down for the year and Chapman working his way back from covid-19. Take those two guys out of the mix and parlay that with the shitty starting pitching and you're looking at ruining guys like Chad Green, Otto, and Britt before we hit September. That means guys like Lasagna, Hale, Holder, Avilan, and King are being relied up for big outs. It's kind of a miracle this team is 9-3 when you think about this.

Now I'm not worried about Masahiro Tanaka. He's still getting stretched out to normal length after working his way back from being struck in the head by a 112 mph line drive from Giancarlo Stanton during a live ab session at the beginning of summer camp. Once he's got his stamina back he'll give the Yankees consistent length out of the number 2 spot in the rotation. Last night's losing pitcher Jordan Montgomery is also someone I have minimal concerns about. That one start from a guy not named Gerrit Cole that lasted into the sixth was made by Gumby. Last night he was bad, it happens. We've seen what he can bring to the table during his rookie year. That was just his second start since coming back from Tommy John surgery. As long as he's healthy he'll be reliable for this team I'm sure of it.

Two guys I am worried about are J.A. Happ and James Paxton. There's hope for Paxton while J.A. Happ needs to be fired directly into the sun. Watching Happ pitch is painful. The experiment should be over. I had hopes of Matt Blake unlocking something in him in 2020, but those are gone. He's just not good and shouldn't be pitching for this team in a meaningful role. James Paxton has stunk as well, but at least there's a reason for it. Pax's fastball is averaging about 5 miles an hour less than normal. He's not going to beat you averaging 91. That's just not his game. When Big Maple is humming at 96-97 that's when he's at his best. The guy from the second half last year who didn't lose was throwing heat. They say he's healthy, but I just can't see it. It has to be some kind of dead arm period he's going through. You can't tell me everything is physically alright with him while he's topping out at 93. He gets one more start and then you have to send him to the I.L. if the same shit repeats itself.

FOR THE LOVE OF GOD CALL HIM UP! There is no longer a service time issue as that has been fulfilled. Mission accomplished Yankees, you gained another year of control over him, now bring him to the Bronx. Clarke pitched around four innings yesterday at the alternate site in what I imagine was preparation for next week when we should see him with the big league club. I can't imagine waiting any longer to bring this monster up. The rotation needs help, you have an answer. Use him.

Clarke should replace Happ no question and if Paxton's struggles continue I think you throw him on the I.L. figure him out, and promote Mike King to the starting rotation. All he's done this year is put out Paxton's fires. His ERA might say 7.71, but if you've watched his two appearances you know he's given the Yankees a fighting chance after relieving Paxton's disaster outings. His previous appearance against the Red Sox gave the Yankees just what they needed to stay in the game long enough for Aaron Judge to hit 'em with the finisher move. I would have no problem at all seeing Clarke and King inserted into this rotation. That would give you Cole-Tanaka-Montgomery-Schmidt-King. I can get fully onboard with those five moving forward. Everyday you have a real chance to win with them while right now you probably are going to be in an immediate hole 2 of every 5 games. It's just stupid to continue this way. Shake it up Cash.

I think this team will be completely fine, but it's important to address the rotation issues now rather than in September. Figure out Paxton. Get rid of Happ. See what Clarke and King can do for you in bigger roles and win every game humanly possible.