It was back in early March of 2015 that I heard my good friend's mother passed away. I wanted to honor her life and pay my respects by attending her memorial service. I knew her and had done plumbing work in her home. She was a petite woman with a thick German accent. Her husband died young and as a result, she worked her entire life well into her mid 80's when she first became ill. She was a survivor, a tough woman who passed her diligence and work ethic onto her oldest son, my good friend. Even after her illness became debilitating, she maintained all her faculties and still carried on a good conversation.

I found out about her passing last minute and I didn't know all the details, but I knew the time and the town where the service was being held. With five fresh inches of snow on the ground and more on the way, I shoveled quickly, put on a shirt and tie, and headed in the direction of the town, twenty-five minutes away...

There are two funeral homes in that town and you pass one to get to the other, so I felt confident I'd arrive at the right place and on time. As I drove by the first one I saw from a distance that the parking lot was completely empty, so I continued on...

When I arrived at the second funeral home, which was seven minutes down the road,  there were lots of cars and thinking that I must have been running late, I parked and headed in quickly. Once inside I saw that all the guests were standing and the casket had already started making its way down the center aisle, marking the end of the service. I looked for my friend and his wife, the only two people I'd immediately recognize, and I couldn't find 'em. In fact, I didn't recognize anyone. Then it dawned on me, I was at the wrong funeral! 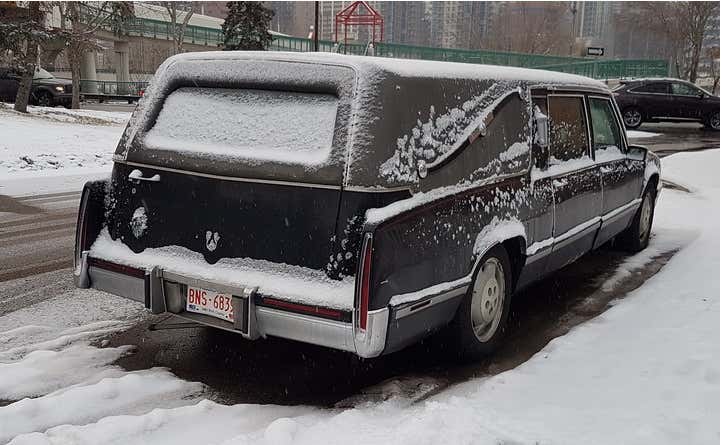 Leaving would have been disrespectful, so I stood and waited for the casket to finish its journey to the Hearse, and then waited for all the people seated to leave row by row. I nodded my head and paid my respects just as I would have had I been at the right funeral and actually known the deceased. With each passing minute I was becoming more and more concerned that I'd totally miss the funeral service I should've been at.

When the chapel emptied I ran to my car, made my way through the crowded lot along with the other mourners, and headed back towards the first funeral home. When I arrived, the lot was almost completely full and I parked in one of the only spots left, in the far corner. I ran through the snow and the slush and made my way through the massive front doors of the chapel. I tried not to draw attention to myself and quickly took a seat in the back row. The service was wrapping up and within a few minutes, the casket began making its way down the center aisle, just as the other one had only minutes ago. 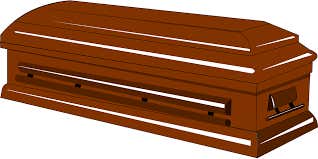 As the casket got to the back, close to where I was standing, my friend saw me and gave me a low wave, arm at his side, fingers pointing towards the ground, nodding and acknowledging that I was there for him. He had seen me, I was there, I paid my respects like good friends do.

No one would believe I attended two separate funeral services in under 10 minutes. Who crashes funerals anyway?