Been thinking about wires. I promise I'm not that high, but it's the year 2020 and it still absolutely blows my mind how fiberoptic cables are crisscrossing on the ocean floor, connecting entire continents. I guess I understand radio waves and satellite beams traveling through the air, which is another incredible feat of engineering, but how the hell do you lay enough cable to communicate underwater?

What REALLY blows my mind is how early the world's largest superpowers (US & UK) managed to link the first transatlantic telegraph cable in the year 1858, taking 4 years and several attempts. The telephone wouldn't even be invented for another 18 years.

With only simple instruments (basically a boat anchor) scientists were able to measure the depth of the ocean floor, locating a plateau between Heart's Content, Newfoundland and Valentia Island, Ireland which avoided placing cables in deeper parts of the Atlantic. At the deepest point, the Atlantic Ocean reaches 27,841 ft, a few thousand feet short of Mt. Everest 29,029 ft. The project would ultimately require 2,500 miles worth of extremely insulated wiring.

August 16th, 1858 - the first message was sent via morse code between Queen Victoria and President James Buchanan as congratulations for completing the project. It took the Queen's entire message about 16-18 hours to be delivered across the wire, and the President's response only 10 hours. 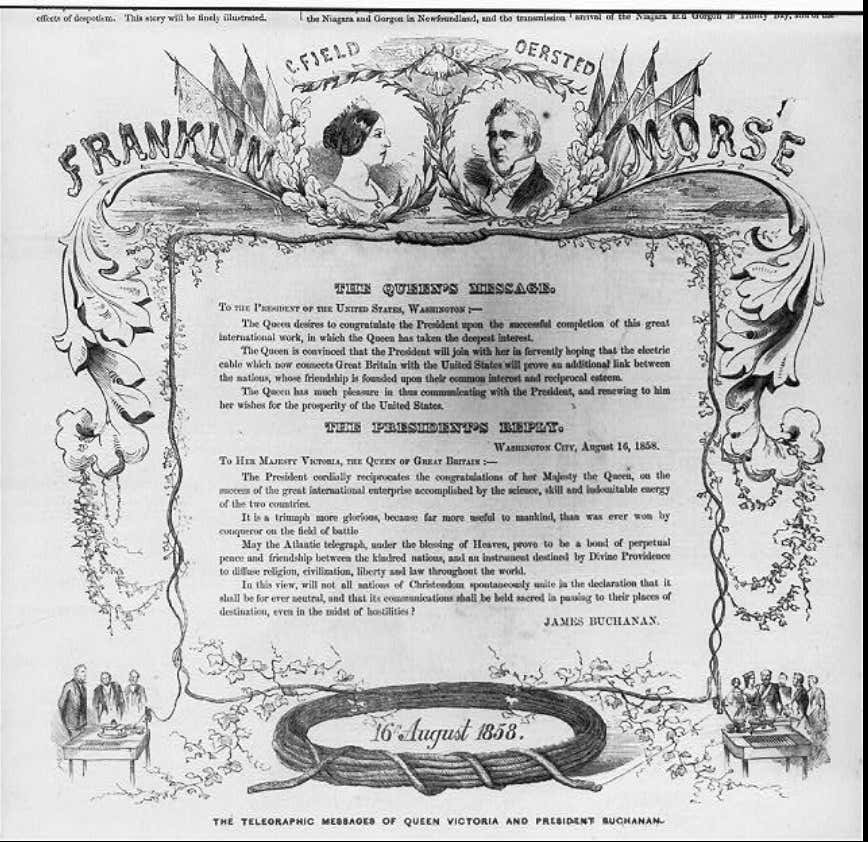 The connection only lasted 3 weeks until someone blew out the wire giving it too much juice. As time went on, the process of laying cable became more reliable and efficient. Wires which laid in areas with high boat traffic began to be buried to avoid cuts in the line. Even sharks have caused problems …

People thought launching a rocket into space was a laughable concept, let alone putting a man on the moon as early as 1969. In 1858 the bottom of the Atlantic might as well have been the surface of the moon, but one man named Cyrus W. Field wouldn't let anyone stop him from connecting two continents with a piece of wire.