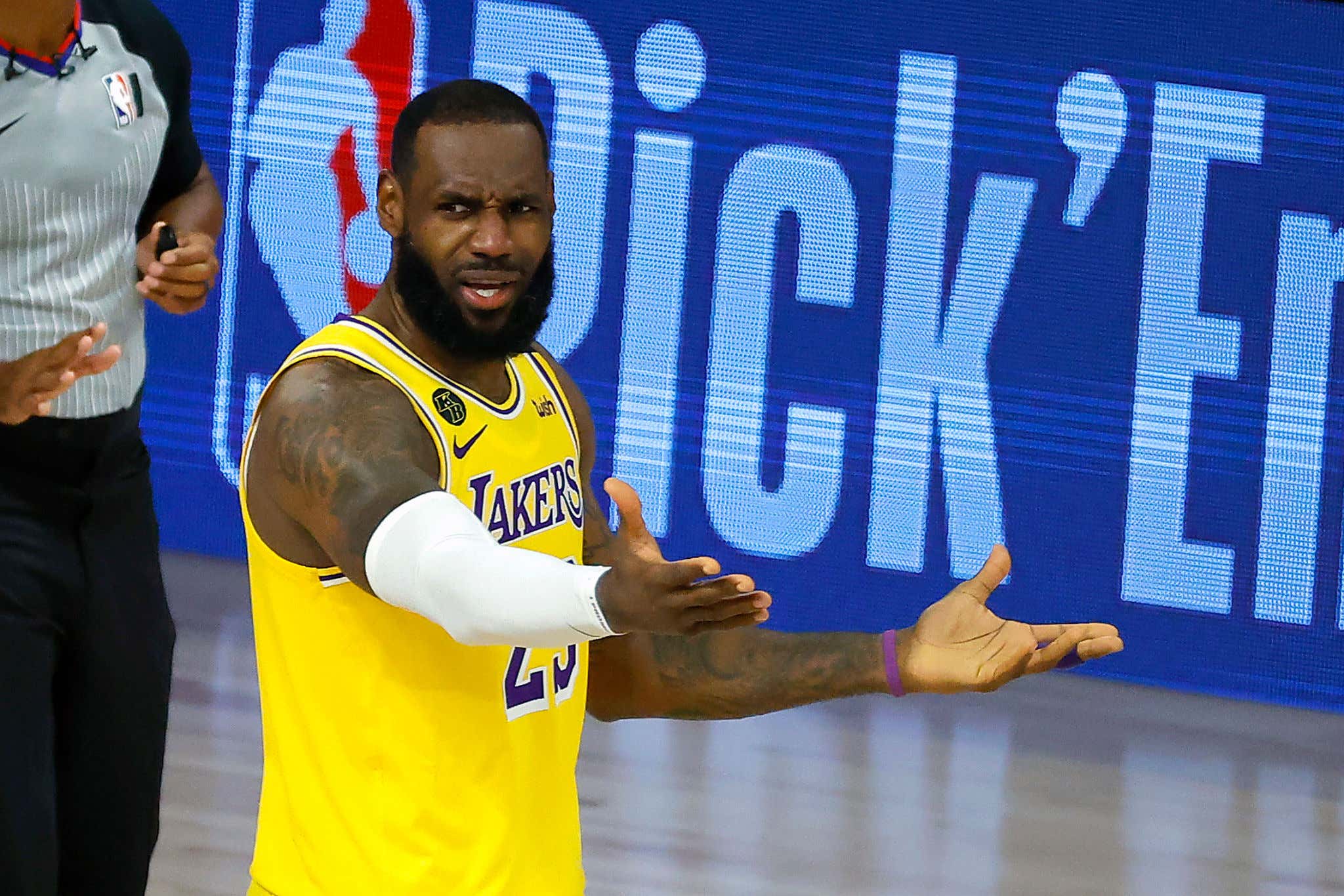 Good morning everybody happy Thursday and Welcome back to another edition of Last Night In The NBA where we bring you up to speed on everything that went down from the night before in the Association. With another 6 games on Wednesday's schedule, the theme to last night was mostly blowouts. No real upsets, only one game decided by 6 points or less, some great basketball but not a whole lot of late game drama. We're inching closer and closer to August 17th and the playoffs so these seeding games are becoming more important than ever. As always if you got busy and missed some of the action that's OK, just keep reading because here's what happened.

Soooooooo the Grizzlies are just never going to win a game in the bubble huh. Now 0-4 in the restart, it's looking more and more likely that this team is going to drop out of the top 8 completely. There will be a play in game in the West, I'm just not sure the Grizzlies will be one of the teams participating. Losing JJJ is a big blow, but all that talk about being disrespected before the restart to then come and and never win a game is a brutal reality. Then you look at their schedule and see OKC/TOR/BOS/MIL remaining. Yikes.

but like it so often has during the year, their lack of defense is what did them in. Things were going great in the first quarter, then they have up 39 in the second and 35 in the fourth, ultimately blowing a 13 point lead. They looked fly as hell with their throwbacks, but not even those things could give them the boost they needed to secure their first bubble win. Pretty disappointing situation given what a surprise season they were having.

For UTA, they too looked awesome in their purple throwbacks, and their win was important because it kept them 0.5 games ahead of OKC and HOU for the 4 spot. For a team that has questions offensively, dropping 124 and making 18 3PM sure was a nice sight for Jazz fans. Their starters were great, with every player dropping at least 15

This Jazz team is kind of hard to figure out. One night they'll look legit as hell on defense but struggle to score 90. The next their defense won't look all that good but they'll drop 124. Make up your mind already. I feel like this is a team that can hang with anyone in the West on any given night, but they struggle with consistency. That could come back to bite them in a playoff series especially because they are going to be matched up with someone tough.

Really the only thing that matters here for the Sixers is the status of Ben Simmons' knee. Everything came back clean which had to be a sigh of relief. I hope everyone stays healthy this entire playoffs, I want to see teams at full strength more than anything. In terms of the actual game Simmons wasn't playing that well, but Joel Embiid did more than enough to carry this team

Their backcourt was also solid with JRich and Shake combining for 29 points, but on some level I'd be a little concerned that the Sixers are playing all these bad teams so close. They now have to decide that if Simmons is going to sit do they keep trying to win and get into the 5 spot, or do they just say fuck it, rest Embiid and concede the 6th seed. My money is on the latter. It's more important for everyone to be healthy than it is for them to try and catch IND who doesn't look like they'll ever lose again.

For WSH, shoutout Thomas Bryant who actually rose up for the challenge going up against Embiid

and look at this point it's all about getting your young guys reps. At least they made this a competitive game so give them credit for that.

These Nuggets man, their depth is really showing in these bubble games. Still without three starters, Bol Bol got a DNP-CD and they STILL are putting up 132 points in regulation. That's big time

They had their way with the Spurs defense, shot 54% and made 14 3PM while never having a quarter under 27 points. That includes the 43 they dropped in the fourth. Again, while missing three key players. This was really the only close game we got all day, it had 10 lead changes and 13 ties, and look the Nuggets are right there for the 2 seed. They trail LAC by just 0.5 games and have all the momentum in the world. Who says they can't snag that seed once their stars are back? They have to clean shit up on the defenive end, but this offense is no joke, especially if MPJ is going to play like this on the regular.

For SA, tough could games for the Spurs there's no denying that. The good news is they are still in the hunt for the play in, trailing POR by just one game. They had their fair share solid individual performances

but you have to show more life on the defensive end than that. Their shitty defense is a huge reason this team is almost 10 games under .500, and I can't imagine that sits well with Pop. Out of all the contenders for the play in I think everyone wants to see SA the least, and I'm sorry if that offends. It's just the truth.

Do you take the Thunder seriously yet? What more would you like to see? This is no fluke, they've been one of the best teams in the bubble since the scrimmages started, and they are absolutely going to be a problem for someone in a playoff series. This team can defend, they have a three headed monster with their guards, a good coach, I'd be avoiding them at all costs

The Thunder dominated this game right from the jump, the Lakers never led and despite shooting just 5-24 from deep the Thunder didn't turn it over and instead beat the Lakers with their defense. That's what makes this team so dangerous, they didn't really get much from their second unit, it's not like a starter went nuts or anything, they just imposed their will and took LA off their game. That bodes well for a playoff series.

For LAL, this was not a situation where LeBron and AD barely played. They both played around 30 minutes but combined for just 28 points on 10-30 shooting. LeBron suddenly looks…..kinda shitty? A team worst -15, he doesn't look assertive like he had been earlier. AD has had two monster games and two stinkers so far in the bubble and if those guys are going to struggle it's a wrap for this team. Their roster isn't good enough to handle off nights from both of those guys. The shooters they brought in could not buy a bucket either, as a team they went 5-37 from three and shot 35/13% as a team. This is where the shooting questions become a real thing. Maybe it's an off night, but maybe this is more the norm for these bench guys that nobody else in the league really wanted. Maybe it's because they can't shoot.

The good news is chances are LeBron/AD won't struggle like this consistently, the Lakers already have the 1 seed locked up so these games are mostly whatever. At the same time they haven't been looking all that dominant since the Clippers game, so it's not like they are unbeatable.

I'm going to keep saying it until I'm blue in the face. Put some goddamn respect on the defending champs. Sure this was just the Magic, but the Magic have been playing well in the bubble. Didn't matter, TOR jumped out to a 15 point lead in the first quarter, they allowed just 11 points and that was that. They never trailed and this game was only tied once. Complete domination from the team up north.

This all coming on an off night for Lowry (2-9), this team is deep enough where that doesn't really matter. Solid defensively, perhaps coached by the best coach in the game, championship experience, the Raptors are going to surprise a lot of their doubters this postseason. No Kawhi no problem as far as I'm concerned.

For ORL, the 7 seed is pretty much locked in so this is more about just staying healthy. Their offense was pretty dogshit, Aaron Gordon pulled his hammy which isn't great, and really outside of Terrance Ross nobody really played all that great

This could very well be your first round matchup in the East, you may remember their battle last year too. That wouldn't be a terrible series in my opinion, but only if Gordon is 100%. After already losing Jonathan Isaac, the Magic are having some shit injury luck.

We'll talk about the Celts in their blog. For now let's try and find some positives for the Nets who got their asses absolutely handed to them. This game was close for a while in the first quarter, but the Celts offense was locked in, they got to the line at will, and before the Nets knew it this was a 30 point game. So what positive could their be with a score like that? Well someone named Jeremiah Martin had 20 points on 8-12 shooting off the bench, that's good!

but yeah that's about it. Hard to find stuff when you get your dick kicked in like this.

And that's it! You are now caught up with everything that went down last night in the NBA. I have to say, today's slate of 6 games is going to fucking rule. We have NO/SAC, MIA/MIL, IND/PHX, LAC/DAL, POR/DEN, and LAL/HOU. Holy moly today is going to be awesome. Let's have a great Thursday!