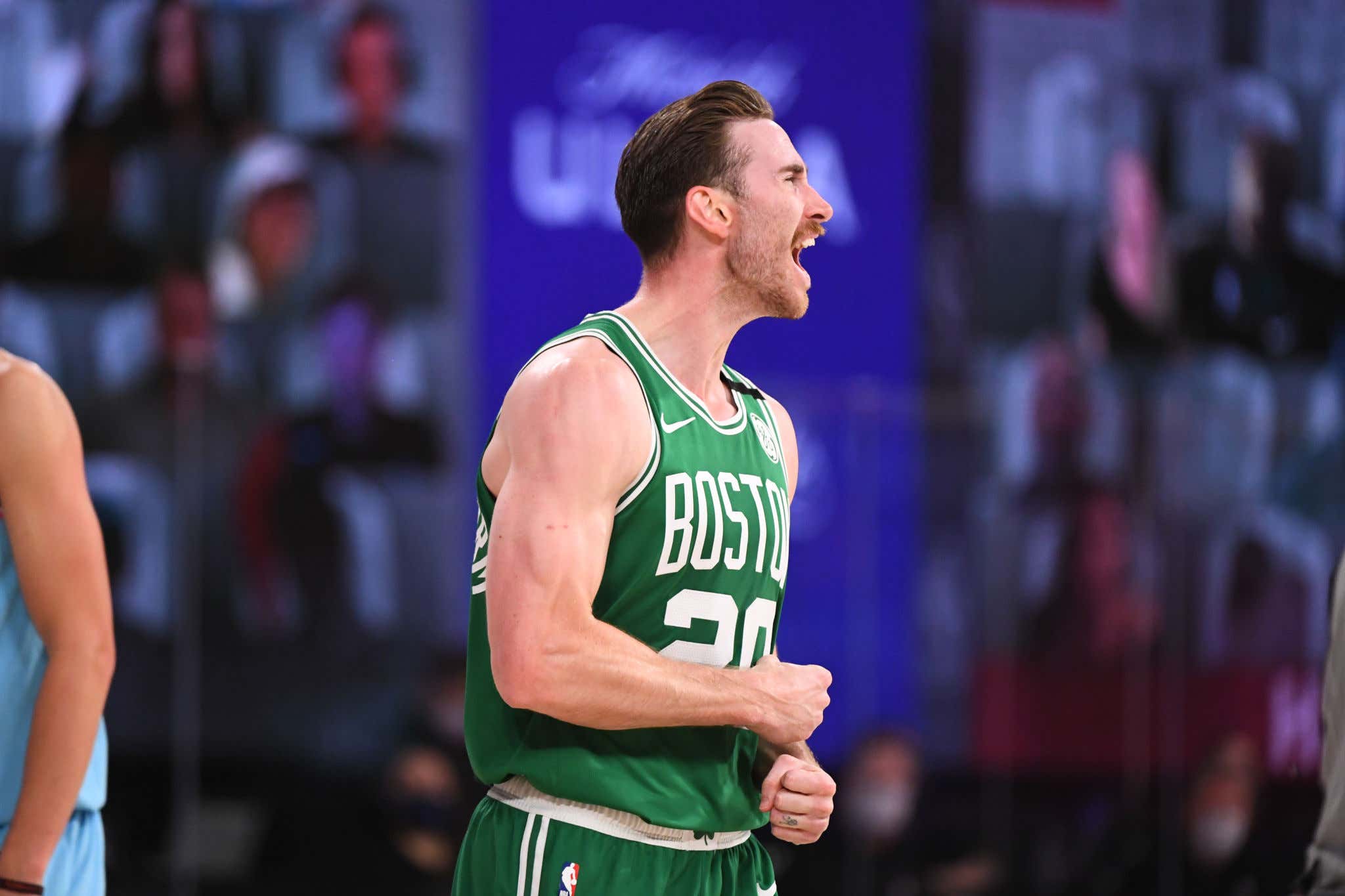 For the most part when it comes to watching the Celts during this restart, I've been optimistic. Even in the games they've lost, I thought they showed some good mental toughness, resiliency, and fight. I can handle a loss if I know the team ya know, actually tries. That's an easy spinzone for my brain. Well let me be perfectly clear here, that is NOT what happened yesterday in their 112-106 loss to the Heat who were without Jimmy Butler. This was the first time in a lonnnnnnng time we've seen this team's emotions get the best of them. They were more focused on complaining when weren't going their way than actually playing hard and that I cannot forgive. There was no mental toughness, there was no intensity on defense, instead there was just bitching and complaining. That's gross and frankly gave me 2018 vibes which I did not care for one bit.

The worst part? They brought this on themselves! This is what I talked about in previous blogs about how much I hated that they were publicly clowning the officiating. I'm to believe it's a coincidence that the first time Tony Brothers got his hands on this team that the whistle didn't go the Celts way at all? No shit! Marcus Smart fouling out in 16 minutes after he publicly said the league was cheating for Giannis is a surprise? Of course not. You knew this type of response from the officials were coming and guess what, it's not going to change any time soon. This team is in no position to bitch and moan about calls. They don't have a superstar. Shit isn't going to go their way. Just deal with it, use that as motivation to play hard and get over it. Instead what we got was nothing but complaining and zero energy and effort on the defensive end so this was a result the Celtics deserved. Just like the MIL game the officiating is NOT why they lost. Their inability to stay mentally focused and execute is why they lost. period. Miami played harder from the opening tip and there's no other way to say it.

Now as you know, we do not run from this blog when the Celts lose. This isn't a situation where we only blog the wins and good times like some other fan bases might. We show up day in and day out no matter what happens, even if it's frustrating. So let's dive in.

- I know you're probably like me and need a positive right now after experiencing that shit sandwich. I have just the thing that will make you feel better. I know this because it worked for me. May I present to you a healthy Kemba Walker.

He looks so good. There's really no other way to say it. This is the version of Kemba each one of us was hoping we would see once the seeding games start. I know we all were annoyed with his rehab plan at times, but it's working. His knee is responding well to playing, his jumper looks GREAT, his legs are under him, his burst is back, if this is the Kemba we get for the rest of the bubble then that is going to be gigantic. He's not playing tonight against BKN which is fine, I've seen all I need to see from Kemba to know he's right.

- I was also pretty pleased with what we saw from Jayson Tatum in his 33 minutes. I'll take 23/7 on 6-11 shooting. In fact I wish they played through him a little more

What I liked about Tatum's night offensively was he did a great job of reading the angles of the zone and finally showed that finishing at the rim that made him such a problem in February. The Heat defense was so good at closing out that Tatum had to adjust his offensive approach a little bit. He was aggressive as hell and was hunting fouls which was great to see. If he can find a way to consistently take 9 FTA a night who wouldn't take that?

On the defensive end he was fairly solid, none of his matchups really did all that much, I would say the only bad part of his night were the TOs (4) which is too many, but overall I thought Tatum was mostly a positive.

- He wasn't efficient going just 9-23, but I think we can all agree the best Celtic in the bubble so far has been Jaylen.

His outside shot wasn't falling which was a first for the bubble games, but at least he fucking tries. At least he's aggressive and attacks the rim when his shot isn't falling and doesn't pout. He had some issues for sure which we'll talk about later, but I liked how active he was on the glass. Sort of annoyed he only took 2 FTA and missed them both, but overall I thought Jaylen was fine.

- Great first half from Gordon Hayward, second half not so much.

- Give the guy credit, he can be maddening to watch at times, but Enes Kanter has come in and done exactly what this team needs him to do in his limited minutes. Offensive rebounding and low post scoring

The Heat are a tough matchup for Kanter because they have quick bigs, but I know what to expect with Enes and I feel like he's filled his role perfectly so far.

- OK enough of that bullshit, let's get to the real meat of this blog. Let's start with the biggest thing that is bothering me this morning. I want to talk about this team's defense, not just last night but this entire restart. It fucking stinks. Like stinks out loud stinks. There are 22 teams in Orlando, the Boston Celtics own the 21st ranked defense since games started on July 30th.

They are allowing 118.3 points a night which is 14th. That is also not good. If you switch that to Per 100 possessions, the Celtics opponents points is 21st in the league. Only PHI is worse. That's right, teams like the Kings, Blazers, Nets, Wizards etc aren't even this poor defensively. If you don't think that is a problem I don't know what to tell you. This team is not good enough at shooting well consistently to be this pathetic on defense. Nothing else matters if this team can't defend.

The biggest play of the night, MIA gets an offensive rebound and they find Duncan Robinson for a huge three in the final minutes. Does that look like a hard closeout from Jaylen? He's barely jogging. That shit infuriates me. Especially since the Celts turned it over and allowed the OREB right before this. That summed up their entire defensive effort for me and it's garbage.

- Erik Spoelstra coached circles around Brad, there's really no other way to say it. On one end you had Brad who once again refused to stop Miami runs. On the other end there was Spo who stopped every single one of the Celts runs with a timeout. Brad did not have his team prepared for the zone which was shocking because this is not the first time they've played MIA. Defensively, the Celts were not prepared to handle how MIA runs their offense and gets their shooters open off screens. Just like his roster, I need Brad to be better. Period.

- I couldn't help but get the vibe that this team saw the Heat were without Butler and figured they'd win just based on who they had available. I fucking hate that shit and when this team does that they deserve everything that happens to them. Who are you to just assume you can walk on the floor and beat someone? Again, that was 2018 vibes. Instead MIA came out and punched them in the mouth and didn't let up.

- Once again a big man had his absolute way with the Celtics defense. Steven Adams, Nurkic, and now Bam. They had no answer for his 21/12, they couldn't stop fouling him, and this is where I just don't understand how you don't at least try Robert Williams for a few minutes. It's not as if things could get even worse so what's the deal. Theis was having issues, Kanter is too slow footed, isn't that why we have Timelord in the first place? At least see if his athleticism could make things tough.

- Tough to win when Jaylen/Hayward go 0-10 from three and as a team the Celts shoot 10-33. As great as Hayward looked in the first half, his 1-5 in 18 second half minutes were brutal. Same with Jaylen's 5-13. One would think that Tatum should have gotten more run considering he was 4-6, so that's on Brad and his teammates for not realizing Tatum had it going.

- Alright, let's talk a little bit about the officiating. I can't stress enough how it was NOT the reason the Celtics lost, but that doesn't mean it was anywhere near being good. The early Smart fouls, the calls on Tatum (especially that Olynyk charge for his 5th), the play with Theis where he was clearly in bounds and Brad had to challenge just to overturn it. Hayward's offensive foul that was a huge turning point in the game and was absolutely not an offensive foul

it was brutal. But you know what I see? I see calls going against guys that always bitch and moan. Yeah, it wasn't an evenly called game for the most part, but so what. Get over it. You played like shit and didn't catch any breaks from the officials. That's going to happen again and again so hopefully this team learns to deal with it.

- Once again Celtics Killer Goran Dragic killed this team. 20 huge points off the bench, they had no answer. That's where missing Smart hurts because it didn't matter who they threw at him he got what he wanted at will.

- Pretty brutal night for Semi too. He shot like shit at 1-6 (1-5), and every single time he touched the ball he panicked. It was like he didn't know what he wanted to do with it once it was passed to him. It killed the offensive flow and to me looked like a freshman who is getting minutes with varsity and just doesn't want to fuck it up. He wasn't assertive, he wasn't aggressive, the defense wasn't their either, just a brutal night all around for Semi.

- Just 15 assists on the night. That tells me not only could this team not shoot, but they didn't move the ball. This team can't win with that type of approach.

All in all, a pretty gross effort from start to finish from the Celts. Luckily they can bounce back tonight against BKN, but this is another team that they can't just assume they'll beat because of the Nets roster. This team just beat MIL yesterday, something you could not do. I'd like to see them actually try on both ends for a full 48 minutes tonight, oh and not let Caris LeVert drop 50 again. Let's start there.