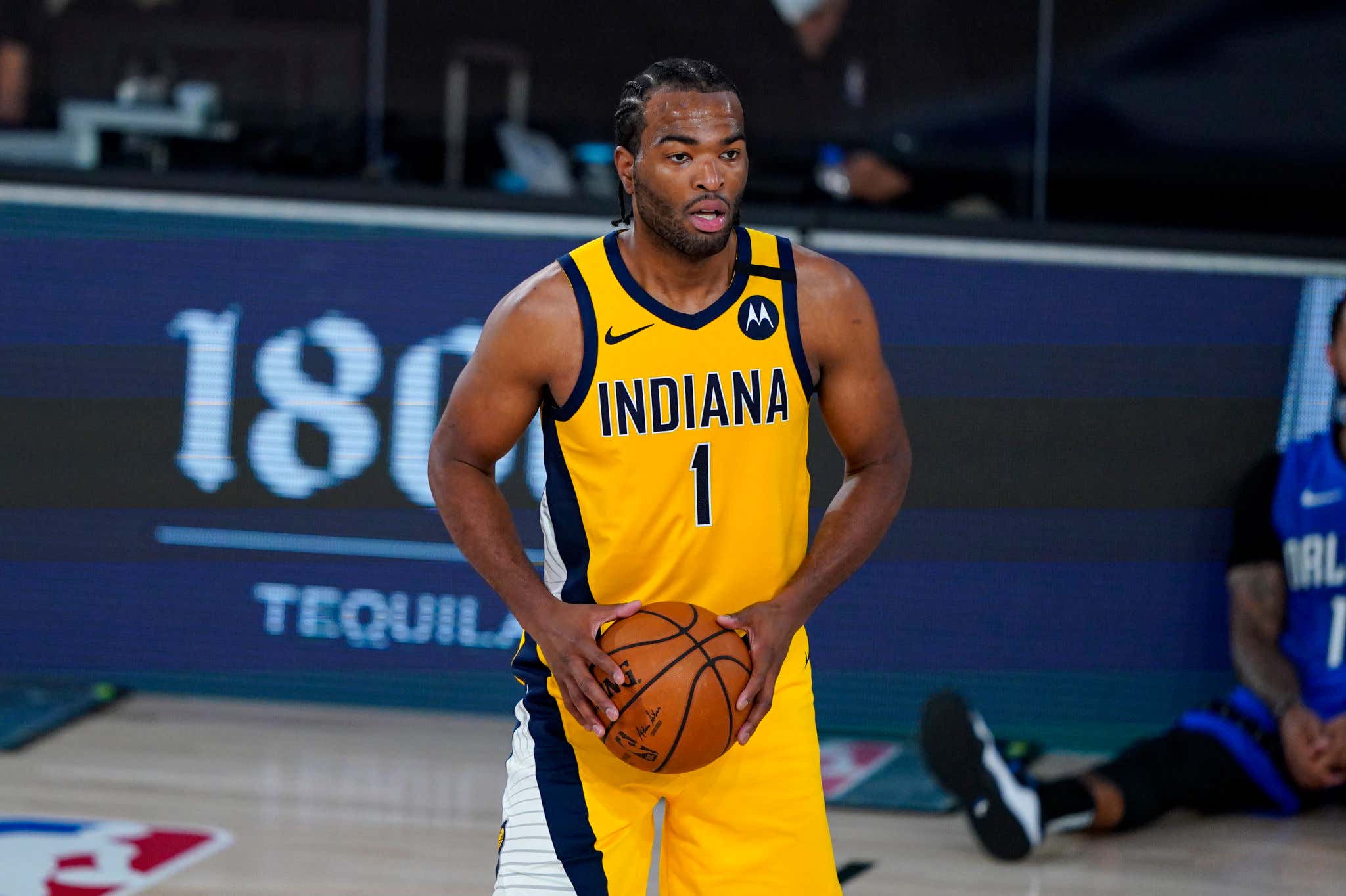 Good morning everybody happy Wednesday and welcome back to another edition of Last Night In The NBA where we bring you up to speed on everything that went down from the night before in the Association. We had another awesome slate of 6 games on Tuesday, with 5 of the 6 being decided by 6 points or less. It was a day filled with massive upsets, dominant individual performances and for the 6th straight day was an incredible day of bubble basketball. Every single day of the bubble has not disappointed when it comes to the quality of the games and Tuesday was no different. If for some reason you missed all the action that's OK, keep reading because here's what happened.

We may as well start off with the biggest upset the NBA has seen in over 20 years right? I don't care how the Bucks managed their minutes, pretty much anyone heading into this game would take the Bucks reserves against whatever the hell it is the Nets are throwing out there in terms of talent. That's not a knock on the Nets, like 90% of their normal roster is out or not playing and the Buck are a wagon. Well as they say, this is why they play the game folks

How does one go about beating a team that seems to never lose? You make 21 threes and turn it over just 7 times. It was like the Nets beat the Bucks at their own game. The Rockets told them there would be a bunch of threes available playing MIL, and the Nets certainly took advantage. Let's not pretend like this was all against the Bucks bench either. They dropped 73 points in the first half going up against Giannis & Co, and they hung on late despite a MIL run in the fourth. Who knows how many positive moments this teal will have moving forward, so this might be the highlight of the bubble for BKN. Maybe it gives them some confidence for their first round matchup.

For MIL, I keep saying it but I'll repeat it again here. These games mean less than nothing for the Bucks, Their seed is all but locked up. At the same time, you could argue they should be 0-3 in the bubble so far. A couple of tough losses sure, but this shouldn't impact what you think their title chances are. Let's not go crazy.

I mean Giannis had 16 points in 15 minutes, had he played his normal 30, chances are MIL wins this game. Eric Bledsoe was a little rusty in his return, but the Bucks are still very much a title favorite. The Lakers and Clippers have bad losses too, that's just how bubble life goes.

The Mavs love playing OT games huh? This is their second OT game in three tries and every single Mavs game has been down to the wire. A 4 point OT loss to HOU, beating PHX by 2 anad now this 4 point win in OT against the Kings. poor Mavs fans, this has to be stressful as fuck to watch. You would think the #1 offense in the league would blow these lower teams out, but that just goes to show you how deep the West is. Even the fringe playoff teams are a bitch to play

Thankfully, as long as their two unicorns continue to look this good, the Mavs will be OK. They are sort of locked into the 7 spot at the moment trailing OKC by 2 full games, and I can't lie, a DAL/LAC first round series would be absolutely incredible. So why did they struggle against SAC? Well they didn't really defend the three, they shot like shit at 36/22%, and they turned it over way too much. They showed up defensively in the fourth quarter holding the Kings to just 13 points, and then they barely missed in the OT to pull it out. Pretty important win because the Mavs haven't really been good in close games. Did you know they are 2-10 in games decided by 3 or less? Their clutch time shooting all season has been pretty brutal, but last night they found a way to get it done.

For SAC, no starter did shit outside of De'Aaron Fox who had 28

The bench was the reason they were in this game to begin with, between Buddy Hield and Kent Bazemore they provided all the scoring. I will say, the Kings dealing with a 50-12 FTA difference is pretty bullshit. How can anyone win with that type of difference? 37 fouls to 21 does not feel even. So you combine a bad whistle with no starter production and they are lucky this even went to OT.

I told you, yesterday was filled with incredible games and shocking upsets. I know the Suns entered Orlando with the slimmest of chances to make the play in game, but look let's give them the respect they deserve. They are 3-0 so far and very much in the conversation for the play in game. Just as much as POR or NO in my opinion if they keep playing like this. Both Devin Booker and Ayton have been monsters

You throw up 47/53% with 17 3PM and only 8 TOs against this Clippers defense who played their normal guys regular minutes, that's impressive as hell. This is not a team you can just see on your schedule and assume it'll be a win. They can beat any team int this league on any given night, their top end talent is elite, and this team plays hard. I wouldn't mind seeing them in a first round series against the Lakers, why not?

For LAC, they need to get their shit together and quick. Their lead over DEN for the 2 seed is now down to 1 game. This is just an example of how tight the West is. Nobody outside of the Lakers can take a breath.

It was a rough night from deep for the Clips, just 8-29, and this is a defense you do not expect to give up 63 first half points. Lou Williams was rusty as well in his first taste of action, but this was a night where they just didn't have an answer for Devin Booker. I imagine the plan is to rest guys as the seeding games to on, but they are seeing their lead in the 2 spot shrink by the day.

but like I said, this thing was over early so none of that really mattered. The Magic are pretty much penciled into that 7 spot so this is mostly whatever, and sometimes you just have to tip your cap to losing to the hottest player in the bubble.

For IND, speaking of that player, I feel confident in saying TJ Warren is the best player in the league right now and frankly maybe the best player to ever play in the NBA. That's the level of play he's at right now. It's incredible, the man does not miss and based on what I see will not miss at any point during this restart

and the Pacers are rolling, now 3-0 in the bubble. I think we all expected them to drop into the 6 with Sabonis out, well shame on us. All this team does is find ways to win when guys go down, it's really really impressive. Their lead over PHI is now 1.5 games but remember, they own the tie breaker so really it's 2.5.

We'll be talking about the Celts in their normal blog, so let's focus on the Heat. What a performance from this team on the second night of a B2B with their best player Jimmy Butler not playing. They came out blazing to start this game, played with incredible energy and did what the Heat do. They made threes and the confused the shit out of their opponent with their zone

They got to the line a bunch because they were the more aggressive team from the jump, their closeouts were quick and it really fucked up what the Celts wanted to do offensively. This was a game they led the entire way, and after they got a 5-2 lead in the early stage of the first quarter, the game was never tied again. A true wire to wire beatdown of a team they are chasing in the standings. It's still going to be tough for MIA to leap BOS since the Celts own the tie breaker, but it's hard to not be impressed with how this team looked despite missing their leader. That's what you get when you combine a hungry team with a great coach. They were better from the jump and never let up, even surviving a couple Celtics runs. That zone is no joke if you aren't prepared for it and the Celts most definitely were not.

Huge, and I mean huge win for the Blazers. Especially with how their last game ended, they needed a nice bounce back win and that's exactly what they got. The Rockets had their fair share of shooting woes, just 39/35% splits despite the 19 3PM. Unfortunately they pretty much trailed the whole way, their largest lead was 1 point and there were only 2 lead changes the entire game. Their defense didn't help much and both Harden and Westbrook had off nights, combining for 12-31 from the floor

Jeff Green actually showed some signs of life which was weird to see, and you would think if the Rockets get 5 3PM out of him they normally win, but that was clearly not the case

The Rockets now find themselves tied with UTA for the 4 seed, and trail DEN by 2 full games for the 3. If they aren't careful they can also be passed by OKC, who trailed both HOU/UTA by just 0.5 games. As you can see, shit is so goddamn close.

For POR, this inches them close to MEM, now just 1.5 games behind for the 8 seed, and as we know as long as you have Dame/CJ you have a chance

But what if I told you neither of those guys hit the biggest shot of the game? That was done by Melo, who's 3 with about 50 seconds left gave the Blazers the separation they needed to pull it out

With MEM losing JJJ and losers of 4 straight, the Blazers are arguably in the drivers seat for that 8 spot. It's going to be a wild finish.

And that's it! You are now caught up with everything that went down yesterday in the NBA. We're back tonight with another 6 games and if I had to guess it'll be another great day of basketball. Have a great Wednesday!