Let's put some context to this clip here.

Fulham and Brentford were playing for a spot in the Premier League. After 90 minutes of nil-nil football, they went into extra time (two 15-minute periods). This wasn't a "Golden Goal," but it was pretty close to it thanks to it being in added time of the second half of extra time. I know, I know, there are a lot of terms here. Regulation, promotion, added time, extra time, it's a lot to handle. Just know that this was pretty much a buzzer-beater to promote your club to one of the best soccer leagues in the world.

Let's talk about the goalie. What the hell was he doing? 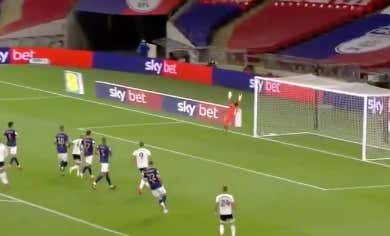 The ball was already in the net by the time he dove. One of the weirdest, late reactions I've ever seen in soccer. It wasn't that crazy of a free kick either. Don't get me wrong, it was struck well, but it bounced before it got to the net. That wasn't a strike off the foot of Ronaldo. Reminds me of the goalie for BU letting in that bizarre goal in the Frozen Four. I guess we'll have to wait and see if there are any rumors to come out as they did about that BU team.