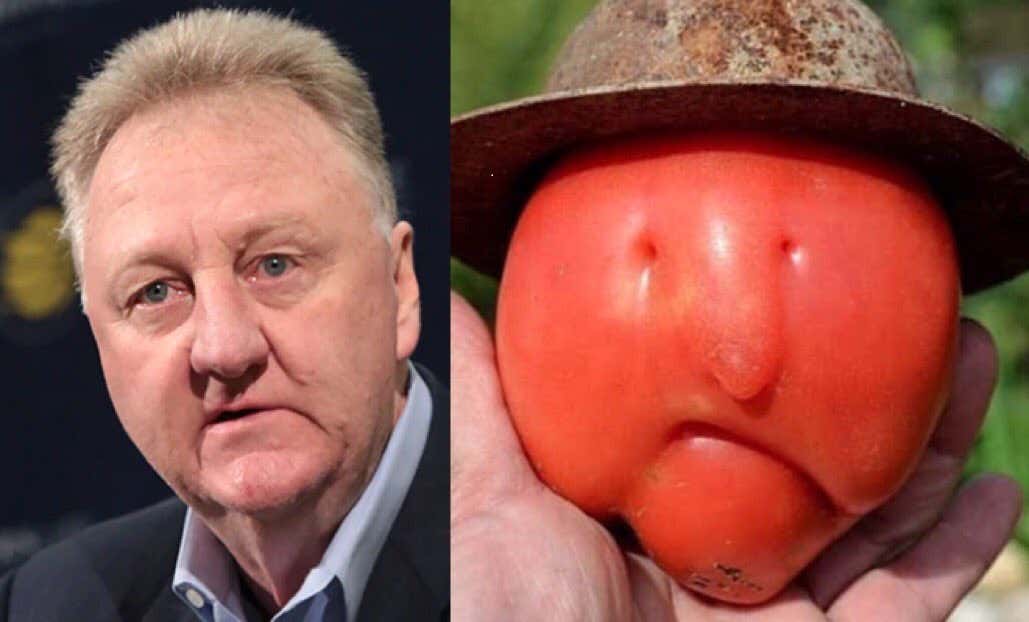 I have to admit, when the internet first caught onto this Larry Bird doppelganger tomato, I was appalled. The notion that any mere piece of produce could compare to such a godlike figure from my formative years seemed blasphemous to me somehow. So I resisted. Even as the internet latched it's cold, clammy, Satan claws into the photo and cackled with devilish glee:

But I've given this a lot of thought. I've taken some long, contemplative walks. I spent some time with my spiritual adviser, 1980s Celtics highlights on YouTube:

And eventually, I made peace with the idea. This tomato does look like the Legend himself.

It's not sacrilege; it's a sign. It's Divine Providence sending us a message of hope in troubled times.

This is like when Emperor Constantine saw a glowing cross in the sky before he fought the Battle of Milvian Bridge, accepted Christianity and moved the capital of the Roman Empire to Constantinople. Or when a cloud looks like Jesus or a water stain looks like the Blessed Virgin or Mother Teresa appears in a cinnamon roll.

So not am I no longer pushing back against the joke, I'm embracing it. Miracles are happening. Basketball is back. The Celtics are going to win it all and end the Boston championship drought that has dragged on since February of last year.  So I suggest we all embrace the Miracle Larry Tomato as an omen of good things to come. The world is healing itself.