Chocolate cereal has always been a bit of an uncanny valley for me. I don't think it's ever been perfected and we've been forced to crown the substandard offerings which have been presented to us over the years. Everyone has a favorite, whether it be Puffs, Pebbles, Krispies, or Chocula but each has its own pitfalls which ultimately cause it to fall out of consideration for a truly perfect cereal. It shouldn't be as hard as the industry has made it. Chocolate = good. Cereal = delightful. Chocolate + cereal should be a slam dunk every time. When even Cinnamon Toast Crunch lended its good name and threw Wendell's baker's hat into the chocolate cereal ring and STILL came up short, I lost all hope. There would never be a chocolate cereal worthy of mass critical acclaim.

But the good folks at General Mills pressed on. They marched into the unknown and came back with a winner. One I'm proud enough to sing the praises of here and now in this public forum. Ladies and gentlemen of the court, the new King of the chocolate cereal realm....

I couldn't believe it, either. In terms of disappointing chocolate cereals Cocoa Puffs were always right at the top of the list. They had everything working for them with the name, the tremendous mascot, the puffs themselves, but it never worked. Then, some decades after they first entered the game, they decided to flatten out the puffs, make them more CTC shaped, and toss some chocolate chips into the squares bringing you the proper chocolate flavor no one else has been able to perfect. Not Cocoa Krispies, Not Cocoa Pebbles, no one. Plus, it maintains its stability throughout the entire bowl. It doesn't turn into mush like Krispies or Pebbles. And it doesn't try to pretend to be healthy like the chocolate versions Mini Wheats or Cheerios. Look at this motherfucker Sonny's face, he knows he cheffed up some crack 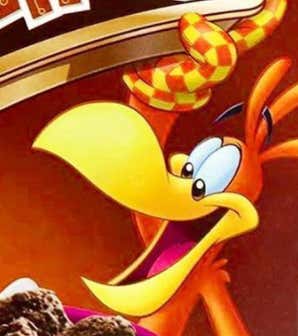 Those brownies are barely out of the oven and he's already dumping them into the bowl because he knows there's no time to spare. You need these in your gullet soon and very soon, and even that may not be fast enough. My only worry is that these are for a limited time. That would be a death blow to their new found reign at the top of the mountain. It's the main problem holding back Chocula and his Autumn-only schedule. As we know the best ability is availability and if Sonny can't keep cranking out these delicious squares year round then I'm going to be forced to recant this claim and start from scratch. Hopefully the fine folks over at General Mills realize they've finally cracked the code and will slowly transition to making these the staple while pushing traditional Puffs to the back burner. But for now, for the time being, let us back in its glory and enjoy what has been gifted to us. All hail the mighty Cocoa Puffs Brownie Crunch, may your reign last a thousand generations.