A large explosion rocked Beirut on Tuesday, injuring many people as glass shattered and balconies collapsed from the impact, Reuters witnesses said.

Lebanon's state news agency NNA and two security sources said the blast had occurred in the port area where there are warehouses housing explosives. It was not immediately clear what caused the blast or what kind of explosives were in the warehouses.

"I saw a fireball and smoke billowing over Beirut. People were screaming and running, bleeding. Balconies were blown off buildings. Glass in high-rise buildings shattered and fell to the street," said a Reuters witness.

Local broadcaster LBC quoted the health minister as saying there was a "very high number" of injures and a large amount of damage. Al Mayadeen television said hundreds were wounded.

As I'm sure was the case with most, my stomach was in knots and a huge sense of dread washed over me watching the different angles of this explosion. Large buildings surrounding the blast appear to have been vaporized in moments & those farther out, including hospitals, have taken on devastating damage. Some of the videos I'm seeing are too graphic to put here but it's heartbreaking.

As for the cause; speculation & contradictory finger-pointing abounds from average-Joe's despite the lack of any solid information to back any of it up thus far… Not that it's helpful or right, but it's in our nature to want to know 'why' right away. Among the ones I'm seeing so far:

- "Doesn't look like fireworks to me. That's for sure from a nuke, you can tell from the cloud."

- "Looks like a grain dust explosion at the silo, ignited by a fire at the warehouse standing next."

- "No coincidence that this is ahead of the verdict in a trial for the killing of ex-PM Hariri."

- "Reports on #WhatsApp are coming in quick & fast that it was #Israel."

- "That second explosion was definitely a missile from a plane."

- "That second explosion was for sure from a ship in the port."

And I have to be honest, I sort of fell into that blind-guess realm. Watching the videos over & over and seeing the fireworks sparkling before the explosion was surreal… So much so that I remarked to the ZBT group chat that it looked like an explosion The Joker would pull off in a Batman movie. It seemed sick. And not that I was truly picturing a fictional character doing this, but I didn't see how it could be an accident. Then Chaps jumped in with a reminder about how crazy & intense accidents from this stuff (nitrates, etc.) could be. 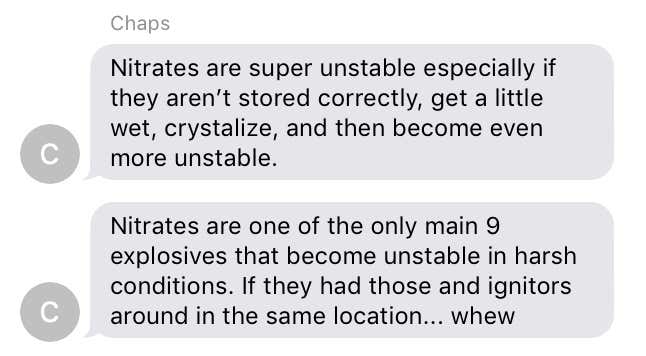 And for now that's what Lebanon's National New Agency is reporting - That a fire broke out at a fireworks warehouse, suggesting this may have triggered the explosion. 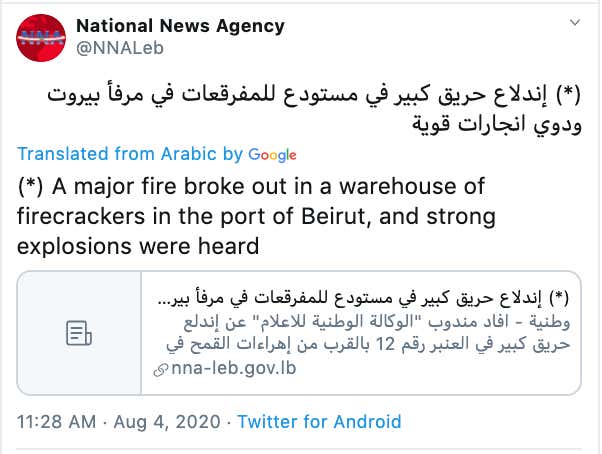 So yeah, easy to get wrapped up in guessing what happened & whether an accident, negligence or intentional I hope the cause is sorted out soon, but the only thing that matters right now is recovery efforts & the first responders on the scene trying to get a handle on things. My heart goes out to everyone in that city & everyone with family members there wondering if they're alright.