Hand up, I was wrong. WAY wrong, and I couldn't be happier about it. Luis Robert is a superstar as we speak. I KNOW IT'S A SMALL SAMPLE, but how he's attacked big league pitching in his first big league action has been incredibly impressive and lead to this offensive output:

Crazytown numbers for the 23 year old.

I'm a total weirdo who subscribes to MiLB.com and pays $10/month or whatever to watch MiLB baseball across the league because there is a ton of rising talent amongst teams across the league. I saw probably 75% of Robert's at bats last summer and thought he would be exposed once he saw Big League pitching for the first time. That his approach was so aggressive that he'd be fed a steady diet of breaking pitches out/off the plate that he'd swing through.

Now… he has done that. A little bit, to a tune of a 28% K rate. But when he's ahead in account, he's been lethal. He doesn't miss many mistakes at all. The video above is a beautiful approach where he went with a fastball and drilled it out of the yard oppo. LOVE that, I just didn't think we'd see it from the jump.

The rest? Yeah he is already a stat cast hero: 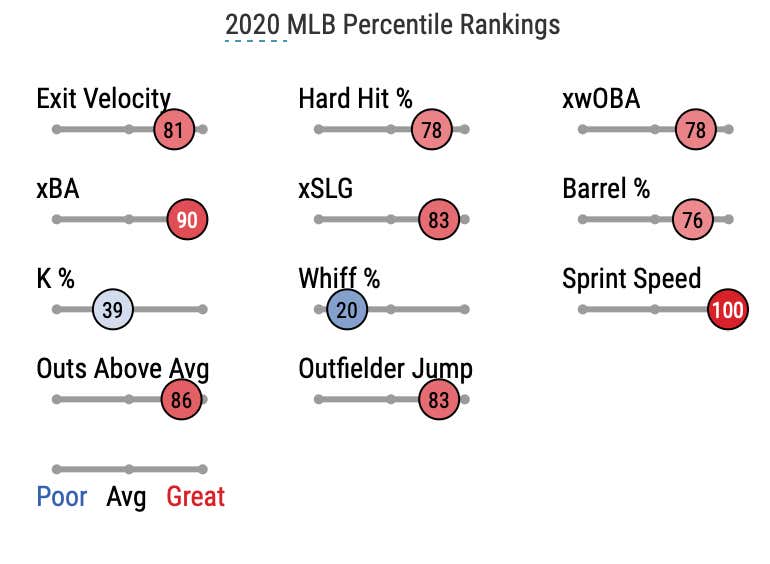 Dude absolutely PISSES on the ball:

Outside of his swing and miss issues, he's proving he's a 5 tool player across the board. One of the very fastest players in baseball, and one that gets great jumps and reads defensively. At the very worst, the league figures him out and he's one of the best defensive outfielders in baseball. At best, he's a perennial MVP and 40/40 threat that hits over .300. Don't take that from me, take it from this scout:

The dude is just a freak of nature and he's going to be starring on the south side for YEARS to come. The lineup is loaded with him, Moncada, Eloy, TA7, Madrigal getting promoted and then Abreu/EE/Grandal/etc. doing their thing. It was a shit 1-4 start, but they've dominated their previous 4 games and will continue that moving forward. It's a redux of the South Side Hitmen

And as we speak, the most powerful 8 hitter on the planet just got reinstated from the COVID list:

Nobody gives a shit about the White Sox, but you BETTER respect their roster. Fuck Mush, Kevin, Feitelberg and all the rest of the haters.