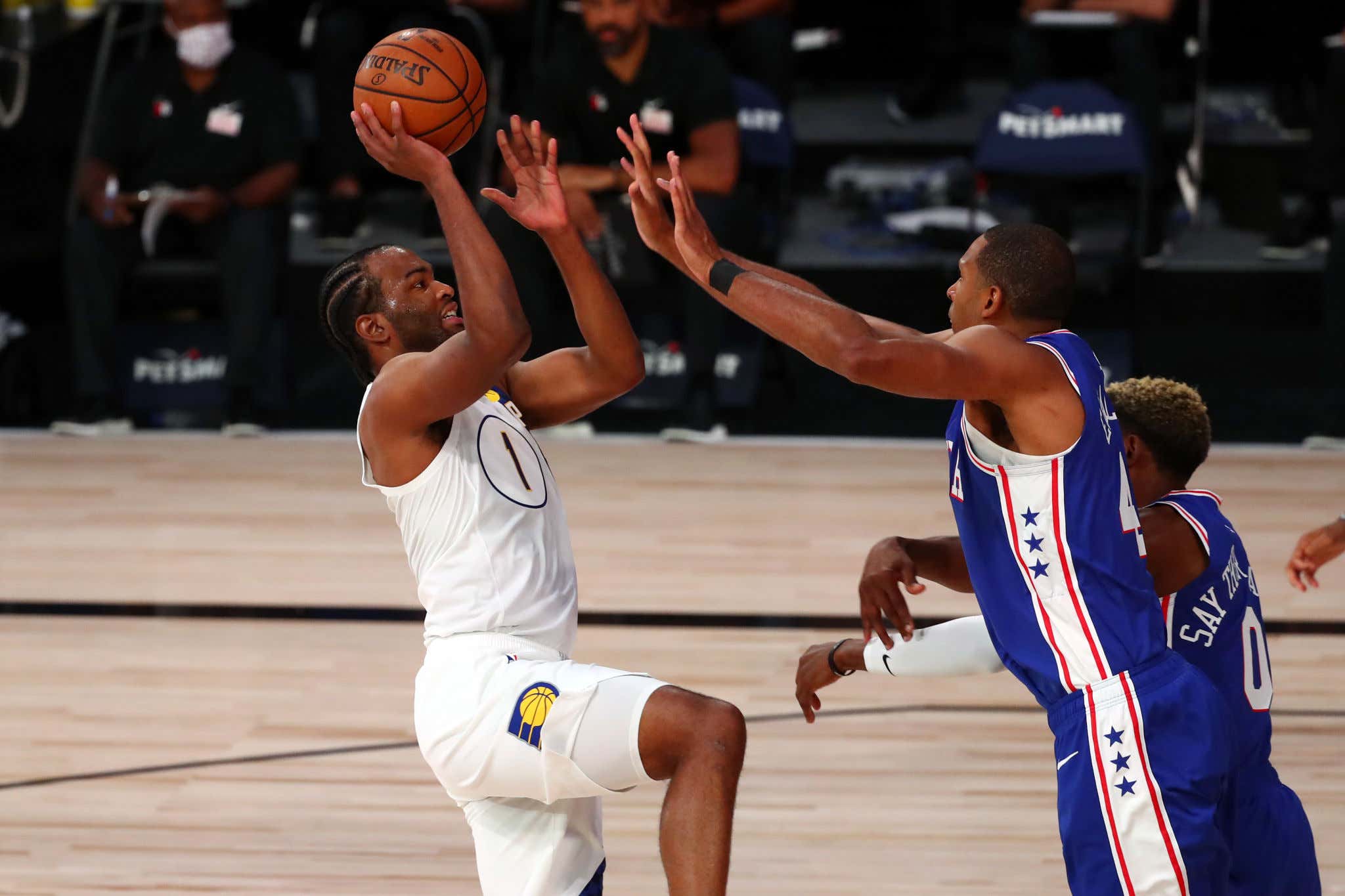 Good morning everybody happy Sunday and welcome back to another edition of Last Night In The NBA where we bring you up to speed on everything that went down from the night before in the Association. There were a total of 5 games on the schedule yesterday and for the most part there was a common theme. Blowouts everywhere you looked. I'd say 4 of the 5 weren't even really close and a few of the results may surprise you. Granted it was Saturday in the summer so you maybe didn't watch all the games, so if you missed anything here's what happened

If you were wondering why maybe the Miami Heat were starting to get a lot of love in the bubble as a dark horse East contender, well their production in this game is a good example. This is the type of game that is possible when your knock down shooters find their groove. Three guys with at least 20, six total players in double figures, and 55/44% splits as a team

You know about Butler and Bam, but how about Bubble Olynyk! The guy looked like Game 7 vs Washington Olynyk which last time I checked is a top 5 player all time. The Heat set the tone early with their ability to drive and penetrate the Nuggets defense whenever they wanted, and then once this game got to the third quarter they clamped on defense, won the quarter 38-22 and the next thing you knew a close game was suddenly a 20 point blowout. Tyler Herro didn't even shoot the ball all that well, so this isn't even the best this MIA team can look.

For DEN, they were still missing multiple starters so it's kind of hard to get a legit read on them, but what we do know is the players that were out there had a tough time on both ends of the floor. Jokic did his best to carry them

and MPJ had his moments off the bench

but it was clear this team was missing their shooters. That's what happens when you go 43/22% and turn it over 19 times. Something tells me guys like Jamal Murray, Gary Harris, and Will Barton would have helped in that department. The Nuggets have now dropped two in a row and have seen their lead over UTA for the 3nseed drop to just 1 game and only 1.5 games against the Thunder who have won 4 in a row. Seeding in the West is super important and now is not exactly the time to be fucking around. I get they have to bring their guys back slowly, but they are running out of games quick.

Speaking of Jazz/Thunder, they had themselves a pretty important seeding matchup as well. The Thunder have been one of the best looking teams in the bubble, and the Jazz have well……been the opposite. They are really making it hard to believe in them with their offense looking this rough. I get not having Bogdanovic is going to make things tougher, but they need to find it from somewhere and 39/25% splits against Western conference teams is not going to cut it. Mitchell going 5-15, Clarkson 4-17, Niang 3-10, this was my concern with the Jazz. Defensively they can change a game, we saw it against NO, but offensively against a good team I don't know where their offense is going to come from. With only a 0.5 game lead over OKC, it's important to remember they now are 1-2 H2H vs the Thunder. That could be important when we get to the end of these seeding games.

For OKC, I find myself falling in love with them more and more and not just because Thunder Twitter is hilarious. This team is good. Like can absolutely win a first round series good.

They defend, they are balanced, and that three guard attack is something serious. This isn't a team that relies on one guy to drop 25, look at their production. Everyone taking around 10-12 shots, six players in double figures, they crush on the glass, they are well coached, why can't this team go on a run? They've been one of the most consistent teams in the entire bubble and Chris Paul is playing the best basketball of his life.

So how high can they go? I'm not ruling out a 3 seed. Just 1.5 back and winning of four straight which is the longest streak in the West? Don't sleep on OKC.

Well, thanks for coming to the bubble NO, I hope you enjoyed your stay because it won't be for much longer. Realistically I don't think many people had them beating the Clippers, but that's why their first game was so goddamn important and why you play Zion more than 15 minutes. The NBA did everything they could to get Zion into the postseason and this is how they repay the league? Brutal.

Zion didn't do much in his 14 minutes, just 7/5 on 3-7 shooting, and really this thing was over in the first 12 minutes. The Pels found themselves down 12, then a 40-20 second quarter happened and it was a wrap from there. This only looks "close" because of a 37 point fourth quarter that didn't matter. Everything you could have said as a reason NO might be screwed in the bubble (aka their defense) was what ultimately did them in. They never led, they never tied, a true wire to wire ass kicking.

For LAC, a nice bounce back performance from Kawhi/George, they had 52 of the 126 so that's basically all you need to know

Hard to know what's closer to who they are, how they looked against the Lakers or here against the Pelicans, but if they have those two performing at a high level I think it's fair to say this team will be pretty good.

They might be in the bubble, but the same road woes still plague this Sixers team. This was a tough one to drop because the Pacers were missing two starters and they now own the tie breaker for the 5th seed. Now PHI has to make up 2 games with 7 to play. Still possible, but certainly tougher. What has to be frustrating for Sixers fans is that once again with Joel Embiid on the floor, this team dominates. He was a monster

He even got help from his two other max guys

But the second he steps off the floor, this team goes in the toilet. I was led to believe this is why they gave Al Horford 109M, but he was a -26 in his 22 minutes. It didn't help that Tobias shot 12-29, but the real issue is how does this team survive the non Embiid minutes. That's basically everything for them because Embiid cannot play 45 minutes a night.

We also got our first look at Shake Milton running the show and it wasn't exactly the savior that we were promised by Sixers fans. A total of 0 points, 3 turnovers, and a fight with Embiid is not exactly what you want to see. They need him to be solid so they can play Simmons at PF, but something tells me they are going to revert to him running the point in the playoffs and as we know that fucks up all their spacing for Embiid. It was also not the best defensive showing from Simmons, who was TJ Warren's primary defender and allowed 24 points on 9-10 shooting. I legit think he's a DPOY candidate and sure fire First Team defender, so I did NOT see that coming.

For IND, these Pacers man. They just never die when you think they should be cooked. Down two big time starters, it's like it didn't even matter

Let's be honest, TJ Warren is legit, he's a solid scoring wing, but he isn't normally 53 points on 20-29 (9-12) good. That was a bit fluky to some degree but when you're hot you're hot. That man was in a basketball zone unlike anyone we've seen so far in the bubble, Harden got close but not like that. They shot well as a team, didn't turn the ball over, and drop 46 (!!!!!!!) fourth quarter points to steal the win. I know people don't give IND a lot of respect, but what they've done these last two years despite all their injuries is impressive as hell.

Would you believe me if I told you the Lakers haven't beaten the Raptors in 6 years? Toronto owns this team and that's even including LeBron James and Anthony Davis. After they both looked so good against the Clips, it was the exact opposite last night with a combined 34 points on 9-22 shooting. They both looked like they were checked out or something, it was weird

Maybe it's just your classic let down game after the huge emotional win against LAC, but that did not look like the Lakers team that was killing people all year. They shot just 35/25% and had 17 TOs, and everyone from Danny Green (0-7) to Kuzma (5-13), Waiters (4-11), Morris (3-10) struggled. That's the thing with these non LeBron/AD Lakers. You never know what version you are going to get and when they are off, they are reaaaalllly off. Shooting was always going to be a question for LA, and if LAC was the best case, last night was certainly the worst. Fortunately for them the game means nothing because the 1 seed is locked up.

For TOR, will people finally put some respect on the defending champs? This is why I said heading into this thing that TOR has just a good a chance as anyone. They have the proven talent, they are deep, they have a great coach, and they are fucking beasts on the defensive end

Kyle Lowry completely dominated this game pretty much from the jump. Whatever adjustment Nick Nurse made at the half clearly worked because TOR came out and dropped 66 points. This team didn't even get all that good a performance from either Siakam (5-17) or the second unit (15 total points) and they still were able to handle this Lakers team with ease. That's impressive I don't care who you are. This win pretty much locked TOR into the 2 seed barring something crazy, and there is no reason to think they can't get even better as they get more in game shape. Siakam won't struggle forever, the bench will show up more often than not, and this was just a reminder that despite not having Kawhi the Raptors are still very much a threat to go the distance.

And that's it! You are now all caught up on everything that went down last night in the NBA. We're back tonight with 6 more games and if they are anything like the previous days, we're in for one hell of a Sunday.