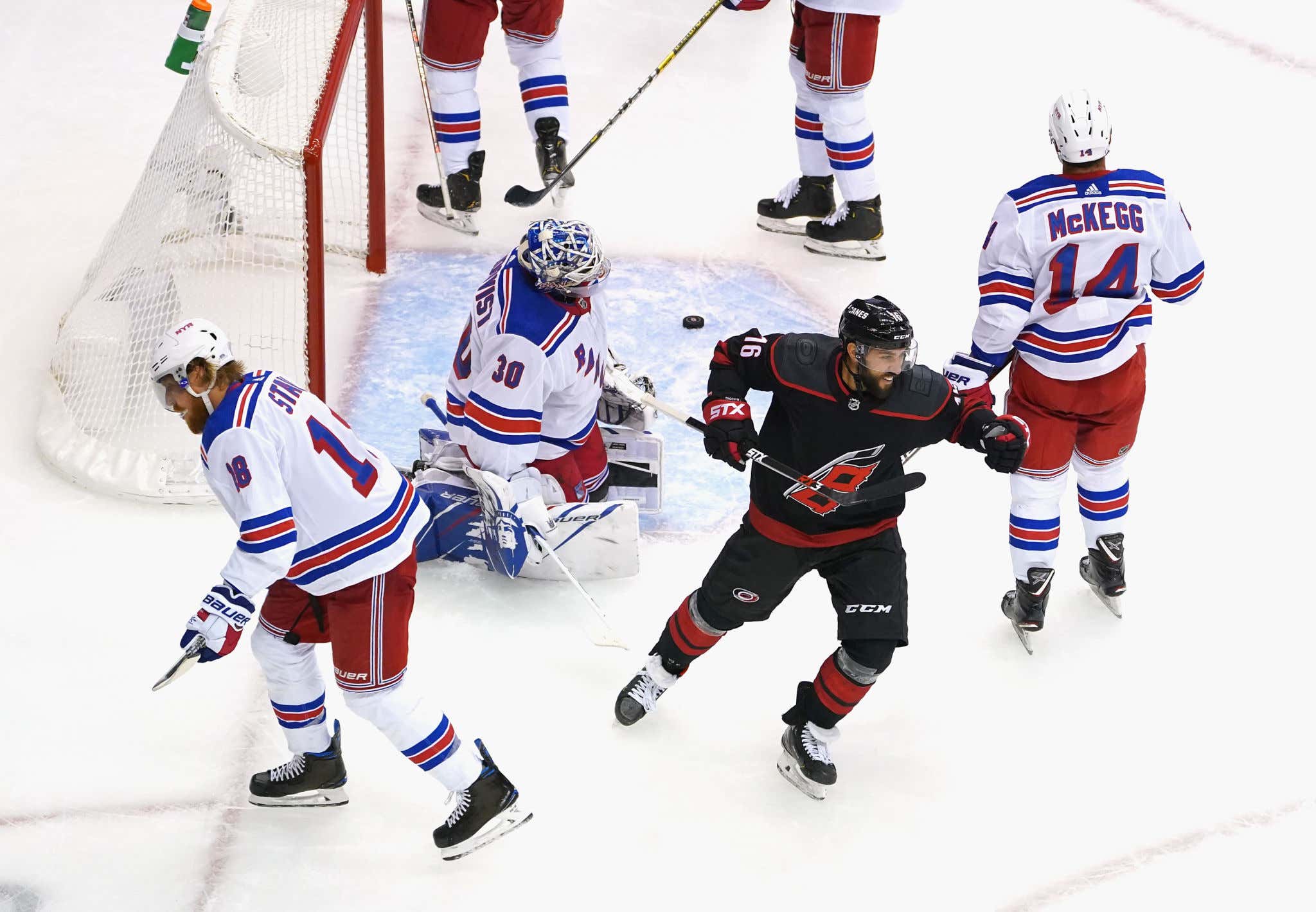 Today, a day that was supposed to be brimming with excitement for Rangers fans, instead kicked off with chaos before the puck even dropped when it was announced stud rookie netminder Igor Shesterkin was "unfit to play". Yes, Henrik Lundqvist has the Hall of Fame career & dominance over Carolina to boot but there's no question Shesty is the "world beater" of their goaltending trio nowadays. How long he's out remains to be seen, although rumor has it he could be ready as early as Monday. Good news is he was in the arena which obviously means it's not Covid-related. The King did his job though kicking out 34 pucks - the game winner was kicked in against him by his own squad - but the rest of the team's rust fans hoped was shaken off in Wednesday's ugly exhibition is what cost the Blueshirts their opener.

They simply never clicked. Not only was Carolina clearly the quicker team, the Rangers were just awful with the puck. I haven't seen Adam Fox make a mistake all season long and even he racked up his share of blunders. Panarin was a passenger today. Zib had a goal and an overall OK game but struggled with some easy plays as well. Even the simplest of short transition passes & zone exits were off, forfeiting possession repeatedly before the Hurricanes even had to defend. They put on enough pressure as it is & the Rangers best puck handlers made their job even easier. The power play, which was a strength for NY all year, was abysmal in an 0-7 effort - a few of which were cut short thanks to penalties of their own. Hard to win a game that way.

But the reality is, yes the Canes were good but this is absolutely a "we lost" situation for the Rangers as opposed to "they beat us". It was a 3-2 final and they really couldn't have played much worse. They lost Jesper Fast real early after a big hit from former teammate Brady Skjei that eventually led to a 1-0 deficit & were forced to give guys more time than usual. Howden was bad. McKegg was 10x worse. But silver lining Kakko, Chytil and Gauthier all had solid outings. If Fast is forced to miss time, I gotta think Gauthier gets a top-9 promotion. But whatever lineup Coach Quinn comes up with has to be the right one because now his squad has to take three of the next four or they're getting the boot from the bubble.