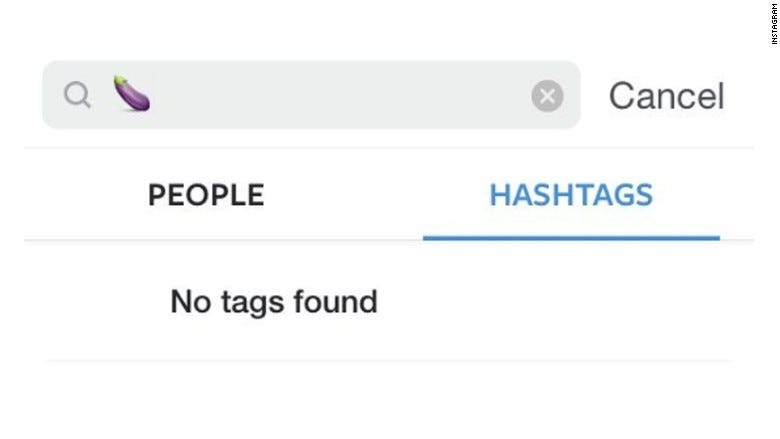 CNN- Instagram now lets you search for photos with emojis.  Well, unless you’re looking for that naughty, naughty eggplant.  The purple fruit, known for its delicious taste (particularly after being deep-fried and smothered with cheese and tomato sauce), is about as offensive as a honeydew melon. But Instagram has banned the eggplant emoji from its search algorithm, claiming that it is too often used to tag lewd photos.  Kids today, right?

The eggplant emoji, along with the peach and banana, belong to the Rorschach test group of emoticons often associated with various parts of the human anatomy. But you can still search for photos and videos tagged with with peach and banana emoji hashtags, in addition to hashtags with the gun, knife, bomb, bloody syringe, pill and poop emojis. A spokesman for Instagram said the eggplant emoji was made unsearchable because it was “consistently associated” with photos or videos that violate the social network’s community standards.

Instagram recently clarified its stance on nudity: Images that show sexual intercourse, genitals, and close-ups of fully-nude buttocks are banned. So are photos of female breasts, if they include the nipple.  And now, so are eggplant searches.

First it was no nipples on Instagram.  Then people drummed up the fake outrage machine over a horse emoji.  And now this.  Big Brother is not only watching, but he is laying the hammer down.  I feel like banning eggplants from being searched on Instagram is how future worlds like the one in Hunger Games exist.  It starts with taking away emojis from search functionality and next thing you know, the government is forcing kids to fight each other to the death for its amusement.  This is the 21st century version of “no taxation without representation”.

The real loser here is the eggplant industry, though.  Sure “eggplant” is a funny name for a food, but who enjoys eating it when it’s not doing an average (at BEST) impression of a chicken parm?  Sure being associated with big dicks on the internet won’t boost sales tremendously, but I imagine the cucumber had quite a run filling that role.  And it’s not like people will not be able to search for giant dicks using emojis now.  The banana emoji will fill the void (haha, fill the void) left by the eggplant emoji and all this censorship will be for naught.  In the words of Dr. Ian Malcolm, “Life…uh finds a way”.