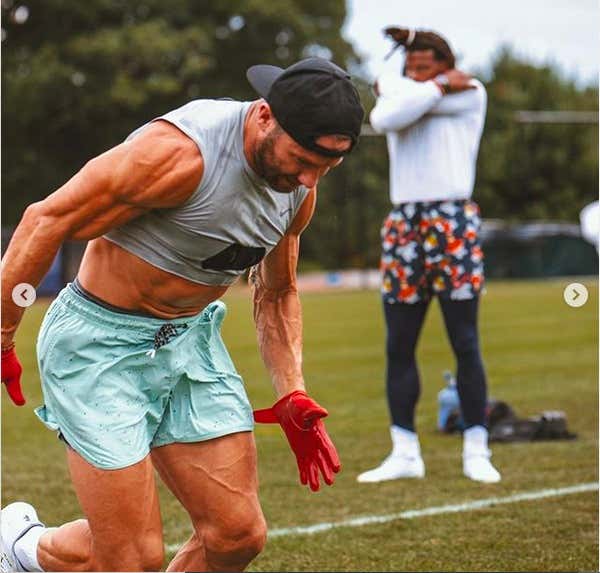 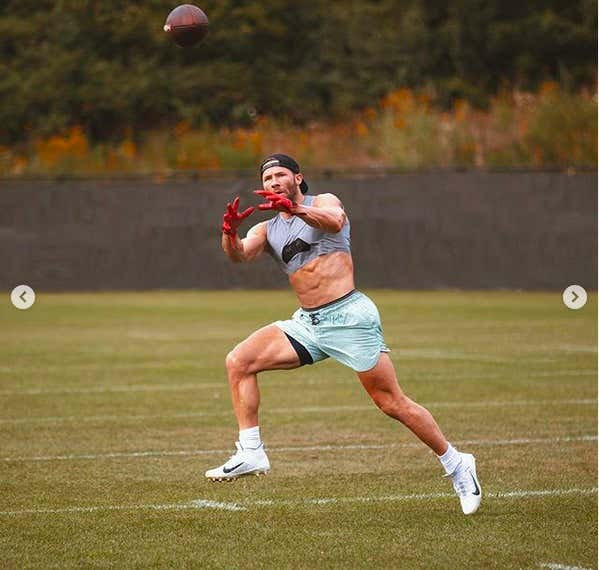 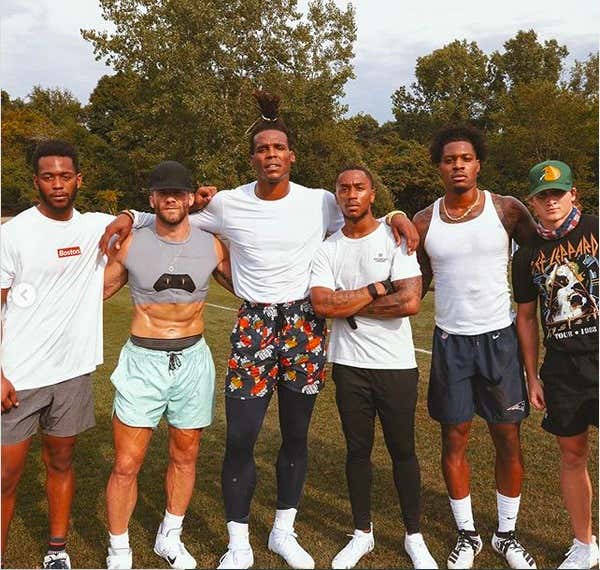 Pictured in this first of the many Class of 2020 Training Camp photos we'll be seeing over the next (God willing) six weeks are (left to right): Jakobi Meyers, Julian Edelman, Cam Newton, Damiere Byrd and Gunner Olszewski.

And while you might look at them and see a ragtag collection of misfits, one with spectacular, thirst trap abs, another in 1980s Jamz and another looking like a character straight out of an Offspring song:

Maybe I'm deluding myself. And believe me, I'm taking a lot of comfort in the knowledge that Edelman and Newton aside, we are looking at the Patriots wide receiver depth chart, not the guys who'll be on the field in two-receiver sets. Because not pictured are first round pick N'Keal Harry and Mohamed Sanu, whom they spent a second rounder on. But the one common trait those five, Harry and Sanu have in common is everything in the world to prove.

Seeing this post after seeing all of Newton and Sanu's insane, boot camp-like workout videos, I can't help but think that, while the team is by NOT by any means better off without Tom Brady, maybe, just maybe, this is what they needed. I mean the whole franchise. It's a crazy idea, but just crazy enough to work. Outwardly, it just feels like they as a group are more determined than the one that reported to camp this time last year. That they've got more to prove. More of an edge. And that the time was right to make a regime change at the top of the player flow chart. And with it, the culture of the locker room.

To support my argument, consider this piece of insider info:

Brady was a loss. I'm not going to try to polish that turd. But the whole hero archetype has always been built on loss. It's part of the human condition. It's ingrained in the stories humans tell, which are often more a reflection of who we are than the literal truth. The whole basis of the monomyth in Joseph Campbell's "The Hero with a Thousand Faces" often begins with the hero losing someone. Oedipus found out his parents weren't really his mom and dad. (Mind you, the fact he kills his real dad and marries his mom doesn't make him any less the protagonist of the story.) Frodo Baggins was an orphan, looked after by his Uncle Bilbo. So was Peter Parker, and his Uncle Ben was killed by a mugger. Luke Skywalker was raised by his aunt and uncle after Darth Vader killed Anakin Obi Wan left his dad a triple amputee in a river of lava. Bruce Wayne's parents were murdered in an alley. Superman and Princess Leia both lost their frigging planets. The point being that loss is loss and it sucks. But sometimes it's exactly what drives us to achieve bigger things, instead of just relying on the people whom we always counted on to take care of us before.

For 18 or so years, the Patriots were the feared, despised and envied heavy favorites. Last year, something changed. The atmosphere around the team was … different. The unquestioned leader of the team came across as frustrated and somewhat detached. Entropy set in over the second half of the season as an 8-0 start turned to 4-5 including the playoffs. It's hard to imagine that general mood was going to change over a couple of free agent signings or whatever. So now they go into 2020 with an identity we haven't experienced since 2001. The team that is being overlooked, dismissed and devalued. And it feels like they're all aware of it. I'm not saying it's better than having the GOAT under center for you, even at the age of 43. But change might be exactly what this whole franchise needed. As that wise football sage OJ puts it, just sayin'.