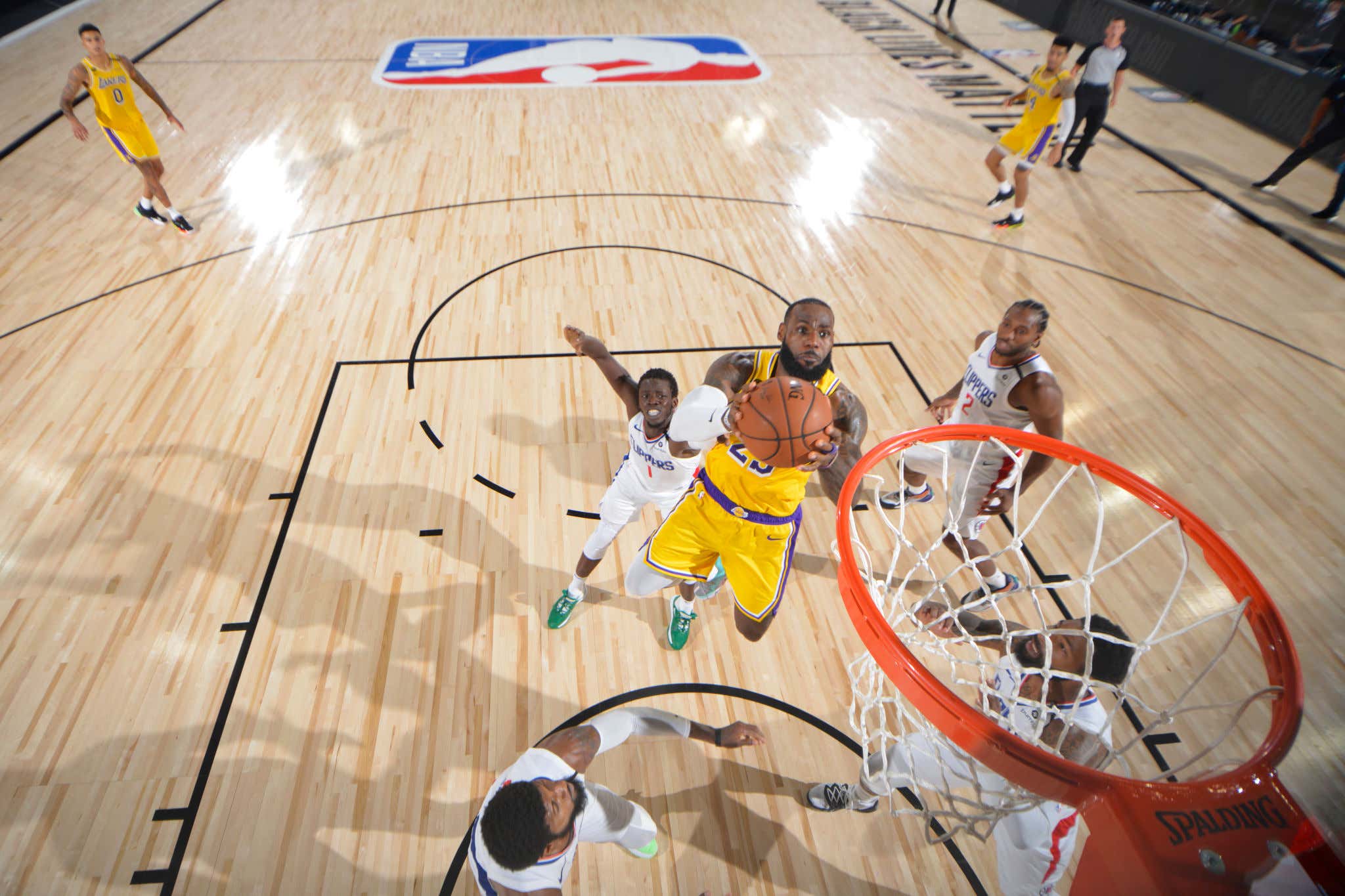 Good morning everybody happy Friday and welcome back to another edition of Last Night In The NBA where we bring you up tp speed on everything that went down from the night before in the Association. As you may have heard it was re-Opening Night lat night and man did it not disappoint. Two absolutely fantastic games, it's hard to bring basketball back better than what we saw on Thursday night. If this is how stressful bubble games are going to be from here on out I may not make it and I don't even root for any of the teams we saw last night. I honestly don't even know what you could have been doing last night other than watching the two games but if for whatever reason you missed the action and don't feel quite like working yet this morning, here's what happened.

The last time we saw the Utah Jazz play the entire league got shut down. Over the next few months we would get report after report about how Donovan Mitchell hates Rudy Gobert's guts. Then Bojan Bogdanovic, their second leading scorer, was lost for the year with injury. There were legit questions how this team was going to score once the real games started up again. We knew this team could lock in defensively, we knew Donovan Mitchell was a stud, but with them going up against a team that looked pretty damn good during the scrimmages, I wanted to see how this team would respond.

It wasn't always pretty. For a large portion of this game Jrue Holiday had Donovan Mitchell in hell. It was a huge reason why he was 4-11 heading into the fourth quarter. The Jazz started slow offensively and at one point found themselves down by as much as 16. But then this team woke up in the second half and looked a lot more like the Jazz team that was giving people fits in the West

People may shit on Rudy Gobert for being a jackass, but his defense and impact changed this game in the second half, The Pelicans didn't really attack the rim the same, they were more hesitant and couldn't really figure out how to play offensively down the stretch. Gobert is a huge reason why. Then, with the game in the balance Donovan Mitchell took over. He led the Jazz with 8 fourth quarter points with 6 of those coming late. His find of Rudy Gobert to seal the deal was one of then better passes I've seen him make this season.

How important was this win? Well now the Jazz only trail DEN by 1 game for the 3 seed. That's why these seeding games are so important for all these West teams 2-10. Finding a way to steal this one could be huge for their potential playoff path.

Which brings us to NO. Quick question if you don't mind me asking. Why the hell are you going to the bubble only to NOT play your best players in a close must win game? This isn't preseason. This isn't a scrimmage. This is a real life regular season game that counts. This is not when you protect Zion. What good is protecting him if you miss the playoffs? The Pelicans need every single one of these seeding games, so you blow a 16 point lead and then you keep Zion on the bench for the final 7 minutes? If I was a player sacrificing for the bubble I'd be heated. Especially when he looked like this

Alvin Gentry tried to explain it like Zion's 15 minutes was all he was allowed. OK fine, then it's on the coaches to figure out when to play him so that he could be available in the event things get close late because again, these are games that count and the Pelicans are trying to make the playoffs here. What a screw up by everyone involved there. At some point you have to stop treating Zion with bubble wrap and let the kid play.

The issue with the Pels though is they fell apart when things got tight. Their offense stalled in the fourth, they scored just 17 points and shot 27/22%. Their inexperience showed. They had an 8 point lead heading into the final quarter, then turned it over nearly as much as the FGs they made. That's tough. Add in all the Zion bullshit and that was a blown opportunity you just hate to see.

As fun as the first game may have been, this was the matchup we were all waiting for. Even with the Clippers missing two extremely important players in Lou Will and Montrezl Harrell, you knew it was going to be a battle just like the other three games have been. Safe to say I think this one lived up to the hype. What started as a contest of who could take more FTs, the refs finally let the players get into a rhythm in the second half and that's when things picked up. Pretty early on Anthony Davis set the tone that he was simply far too large of a human for any Clipper to deal with

and he was really the only Laker that had any sort of offensive life in the first half. But then the rest of the lineup woke up, Dion Waiters started to do crazy shit

and then LeBron woke up, put this team on his back in the fourth quarter ON BOTH ENDS and carried this team over the finish line

How you don't box out LeBron on that game winner I'll never know. That has to drive Doc fucking crazy today. And while LeBron/AD will get a lot of the headlines and love today, there's no denying the Lakers role players were huge when it mattered most. All that Caruso talk we always get looked rough early because the dude couldn't do shit offensively, but his defense was gigantic in the biggest moments when the Lakers were making their run

Same thing with Kyle Kuzma. He was another guy that struggled with hit shot early, but his defensive energy was fantastic pretty much the whole night. By the fourth, he started making his threes and that really helped give the Lakers a cushion

My biggest takeaway from this look is that LeBron isn't fucking around. This team might be top heavy, but their role players are more than capable of giving just enough to make a difference. If this is what they are going to look like defensively, this group should have no issues.

For LAC, the spinzone is you lost by 2 without two of your best players and guys that are basically 20 ppg scorers. At full strength, they probably win this game. But what is also true is that Kawhi was taken out of this game by LeBron in the fourth quarter. He's too important to go just 1-2 from the field in 9 fourth quarter minutes. Paul George did his thing late, scoring 10 on 4-5 in the final 12 minutes, but the rest of his team was nowhere to be found.

If this team is going to be shorthanded, they can't have one of their superstars disappear like that when it matters most. It was almost like Kawhi forgot how to get by people or something. He couldn't shake his defender to save his life and as a result you saw a Clippers offense stall. If not for some kind of prayer JaMychal Green threes this thing gets out of hand. They also turned it over 20 times which is a death wish against the Lakers. You could spin that and say look how poor they played down the stretch and only lost by 2, but this was a chance for the Clippers to really make a statement. Win 3 out of 4 with the latest coming shorthanded? That would have meant something.

All I know is this though. We deserve this as the WCF matchup. I don't care what else happens in 2020 as long as we get these two teams with full health and a trip to the Finals on the line. Every single one of their matchups has lived up to the hype.

And that's it! You're now all caught up with everything that happened last night in the NBA. We're back today with another full slate starting this afternoon with 6 total games. The NBA is officially back for real this time guy, let's have ourselves a Friday!