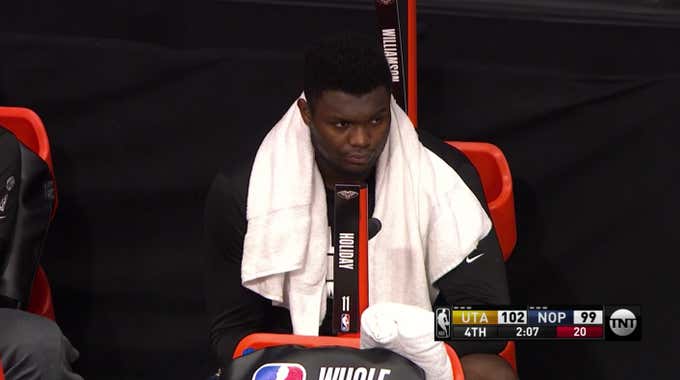 NBA basketball is back baby! What a first game we had as we work out way back into this new normal. We were all excited to see Zion and right away the man did not disappoint

Seems like a guy that you would want on the floor at the most important part of the game while things are in the balance. Instead, Zion subbed out with about 7:19 left in the fourth with the Pelicans up 93-89. We never saw him again. Even as the Jazz made a push to close out the game and with plenty of opportunities to put Zion in, Alvin Gentry decided against it. On some level I get it, this is the first game back and you don't want to put too much on Zion. The thing is he had only played 15 minutes! What's 17? These games are sort of important for the Pelicans to win last time I checked. They basically need to be perfect to get into that play in game, you already blew a 16 point lead, and now you're going to keep one of your best players out? This isn't a scrimmage, these games count. You'd hate for that to come back and bite the Pelicans, that would be unfortunate.

But how about the Jazz. Things looked pretty brutal there for a while with Donovan Mitchell getting eaten alive by Jrue Holiday and nobody really showing up offensively. But they didn't panic and had much better execution when it mattered most. Then on the biggest possession of the game Mitchell found Gobert for what would be the game winning FTs

What a pass that was and of course it's going to be Gobert to seal the deal. That's shit you can't even write in a movie because people wouldn't believe it. He scored the first basket and had the final points in the first game back. Of course he did.

All I know is it felt great to have basketball back and that first game lived up to the hype. Probably didn't love it as a Pelicans fan, but hey maybe next time play that Zion fella.

Now we got Kawhi vs LeBron. Let's do it.