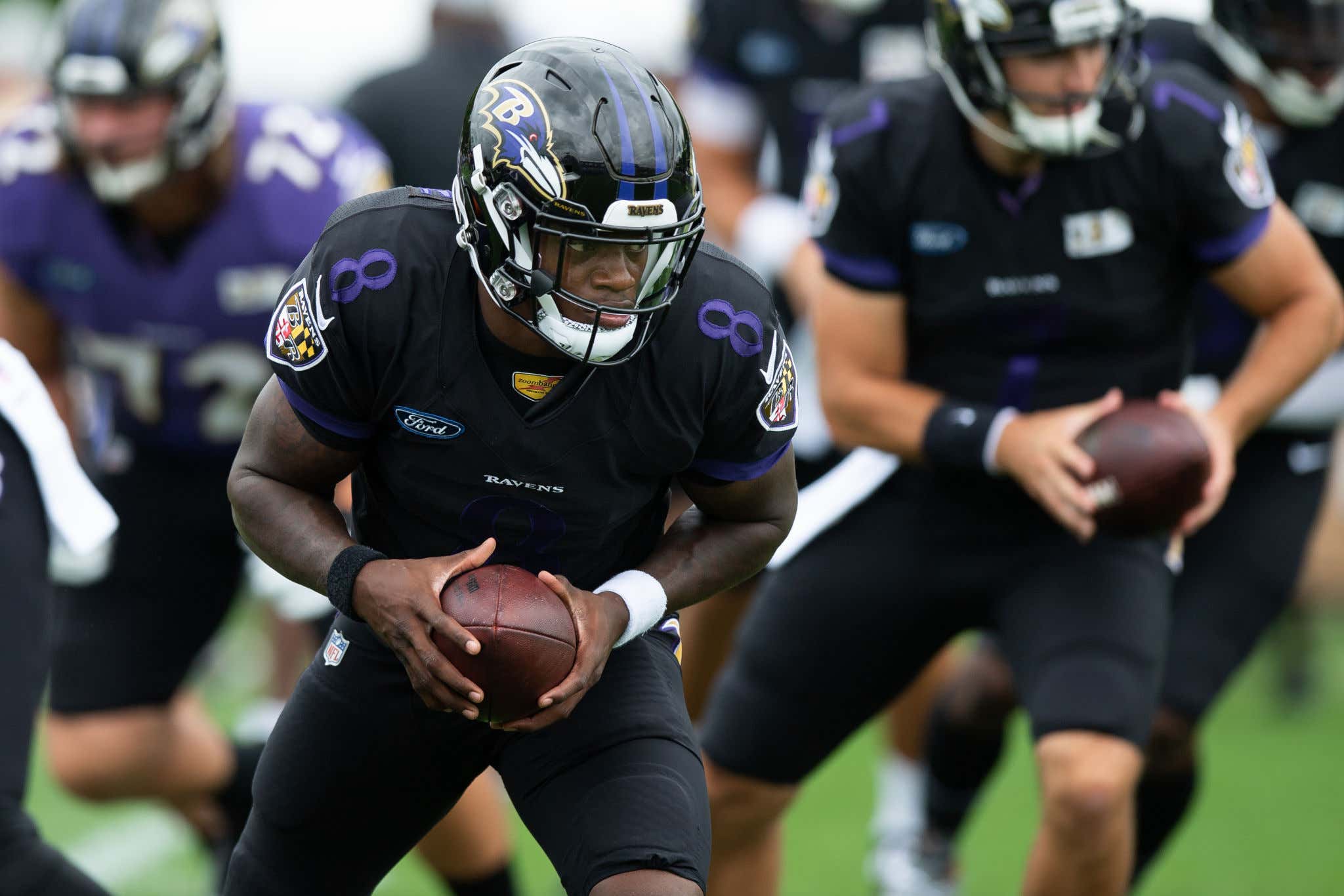 We made it. It feels like it's been so long but we've finally made it. The Ravens are popping on the pads and holding a real football practice this morning. Sure, they've been in training camp since July 28th, but if you watched this past week's Hard Knocks you know that what NFL teams have been up to is hardly football. A Harbaugh once said the body craves contact, and that holds especially true for a run-heavy Ravens team that plays one of the most physical brands of football in the league.

This past Friday should have been the first preseason game against Buffalo. Which is a real shame because betting on preseason Ravens football wins has basically bankrolled the rest of my NFL season for years now. John Harbaugh hasn't lost a preseason football game since 2015, reeling off 17 straight dubya's. It's always a treat to watch the undrafted guys jostle for a roster spot while raking in a little dough. COVID took that away from us, but we made it to padded practices and it looks like we're full steam ahead to Week 1 from here.

Who knows what this coverage will entail, but it's the best we're gonna get. It's 17 practices in 20 days, 14 of them in pads. That's a lot of practice in a little time, so here's three big things at stake in this year's weird version of a training camp.

Who's Starting On The Interior Offensive Line?

This is by far the biggest competition in camp this year. The retirement of Marshal Yanda speaks for itself. He's irreplaceable and one of the best guards the game has ever seen. With that said, the Ravens have a good handful of players who have proven capable of starting in this league.

Bradley Bozeman was a rock at left guard in his first season as a starter, and I would expect that he slots back into that position. Some have noted that his background at center may make him a better candidate to start there, but I think continuity is key on the OL and in a shorter training camp, it's important to keep him there. Center is where things get interesting. Matt Skura was the starter for most of the year last year before blowing out his ACL, MCL, and PCL in Week 12 against the Rams. Incredibly, he was cleared to play this past week in what has been nothing short of an incredible recovery. Issue for him is that Patrick Mekari, an undrafted rookie, stepped up beautifully in his place from pretty much the first snap, shutting down some guy named Aaron Donald the rest of the night. It's safe to say that both Mekari and Skura both benefitted from playing with Yanda., so it'll be interesting to see who comes out ahead without that safety net on their right hip.

Which brings us to that right guard spot. It could go a lot of different ways. Ben Powers was drafted last year out of Oklahoma and is in the mix. Ben Bredeson was drafted this year out of Michigan to compete for the job as well. Same goes for Tyre Phillips out of Mississippi State, although he projects more as a swingman who can potentially fill in at tackle if Ronnie or Orlando get injured. And finally DJ Fluker is a veteran guard and former first rounder who was signed in the offseason. It looks as though Fluker is the frontrunner for the job, but anything can happen. We could even see Mekari slide over if Skura is healthy and strong enough to take back his center spot. Ton of possibilities here.

Who Will Win The Return Specialist Job?

This is a position that seems to have been up for grabs pretty much since Jacoby Jones left after the 2014 season. Admittedly, it's also a position of far less importance than it's ever been in the NFL, and that goes double for a team that moves the football as well as the Ravens. For a lot of years, the Ravens' best chance of stealing football games was playing great defense and hoping a special teams return would cash or shorten the field for the woeful offense. Times have changed.

Ball security is always priority one for returners, but that holds especially true when you know that your offense is about to shove its way down the field. So I'm looking for a guy with great hands. Late draft pick James Proche is my guy for that. Nobody caught more passes in college football than he did at SMU the past two years. He's too talented not to find a way on to this roster and I think this role is a great way to help him earn his keep. Devin Duvernay has similar qualities and returned a few kicks at Texas as well. Even with these two rookies, the Ravens went ahead and signed running back Kenjon Barner last week, who has made a career out of returning kicks in this league. I guess with Deanthony Thomas opting out, they wanted to add a veteran to the mix but I'm partial to these rookie WR's getting the job. Hopefully that's the way it shakes out.

How Quickly Can Patrick Queen and Malik Harrison Get Up To Speed In A Short Training Camp?

The way the draft worked out could not have turned out better for the Ravens. The middle linebacker spot was an issue all season after CJ Mosley left for NYJ, and Wink Martindale did a fantastic job of making chicken salad out of chicken shit for a good while after the debacle in week 4 against Cleveland. But we all saw what happened in January. We don't need to talk about it. We just needed to do something about it, and drafting the future of the middle of the defense with both Queen and Harrison was the answer.

Queen only turned 21 this week and only started one year at LSU. Getting yourself drafted in the 1st round anyway says what kind of talent he is and how quickly he learned on the fly in the SEC, but the NFL is a different animal. Not having any preseason games is problematic because he'll be expected to adjust to NFL speed from the get go. For a linebacker that will be asked to excel in pass coverage, I need him to get as many reps at full-speed in practice as possible. There may be some growing pains here early in the season, so we need to be patient with him if he gets off on the wrong foot.

I'm less concerned about Harrison because he will be playing closer to the line of scrimmage and he started multiple years in the Big Ten, but he's going to have to be a quick study too. Nick Chubb and Kareem Hunt are waiting Week 1, and they don't give a shit how long you've been in the league. A lot of eyes will be on these two.

Those are the main football related issues that I see in camp this year. The obvious bigger issue is keeping everybody COVID free and keeping them injury free. Seems like every year we lose somebody for the year in camp. Tavon Young was that guy last year. It's sad but it's the way it goes. We were incredibly lucky to have had very few injuries throughout the year. There's no promises that that carries over to this year. So let's stay healthy, let's stay COVID free, and let's play some football.