I've been paying attention to the Patriots every single day of my life, for as long as I can remember. One of my earliest childhood memories is of drawing running back Jim "Bo" Nance with a cartoonishly large belly because he seemed really fat on television. Then there was the time when I was older and watched 6-1, 250 lb linebacker Sam Hunt return a Pick-6 for 68 yards, squat down, put the ball between his buttcheeks and poop it into the endzone and I was hooked for life. The point being that I've been paying attention all these years. And I can honestly say there's never been a single day like yesterday.

Which is not to call it the worst day in the team's offseason history. For that I can take you to the final preseason game of 1989 when they lost starters on all three levels of the defense for the season: safety Ronnie Lippett, tackle Garin Veris and Hall of Famer Andre Tippett. And the year was shot all to hell before it even began. I'll also nominate that day in March of 2018 when they lost Danny Amendola, Dion Lewis, Malcolm Butler and Nate Solder between sunrise and sunset. Or hell, just give me St. Paddy's Day, 2020 for the obvious reason.

So this wasn't the worst day; just the strangest. It's one thing to lose guys to injury or free agency. That's part of life's rich pageant. But to lose two key defensive players, two starters on offense, a Core-4 special teamer and a reserve voluntarily over fear of a virus for one season with the opportunity for them to return next year? That's unchartered waters.

There hasn't been another opt out since Pat Chung Tuesday morning. So any concerns we had there'd be a total abandoning of the ship, like Deadspin when they were told to start creating entertaining content in order to keep their jobs, seems to have been avoided. For now. So it seems like as good a time as any to do a postmortem, discuss the causes of the key players' decisions, and what it means for the immediate future.

Dont'a Hightower explained his reasoning for opting out, and no one can argue with his logic.

As of now, I've not heard anyone argue with his reasons. Even the most deranged Covid Hoax Conspiracy Theorist can't debate a man with a baby on the way not wanting to risk bringing a virus home. God forbid the mom gets sick or the child has a weakened immunity or something. We've seen Hightower fight through a medical textbook's worth of injuries and illnesses to stop Marshawn Lynch on 1st & goal to preserve a Super Bowl and make the game-changing strip sack of MVP Matt Ryan to win another. But getting his family sick would be the thing there's no coming back from. Regardless of the odds.

Hightower will be tough to replace, but fortunately the Patriots were proactive there.

Linebackers Josh Uche and Anfernee Jennings were the Patriots second and third picks, Nos. 60 and 87 overall. Uche's selection, you'll remember, was overshadowed by the appearance of assistant GM Nike the Dog trading up to get him. In an increasingly positionless world, neither has been a traditional, full time, off-the-ball inside linebacker. But then frankly neither was Hightower when he came into the league. He had to move inside due to injuries in his second season, 2013. And even though the move was more or less permanent, he still lined up a lot outside on the LOS as a Will. The major appeal of both rookies is that they are position fluid in the most progressive and accepting scheme in football. I don't want to set my sights too high because it took Hightower a while to get used to the move inside. But at least the Pats made moves to rebuild their second level before he decided he needed to sit this one out.

Pat Chung discussed his reasons on one of the morning shows. And they're even more compelling.

"I’m in the latter end of my career, so I wanted to play football. But when it comes down to it, I feel that money is not that important. I have a girlfriend that’s pregnant, a baby girl coming soon, my son has a little asthma, my dad is 75 years old. I just felt like this was the best decision for my family to keep everyone safe. I don’t think it’s fair to them. So I decided to do that. It’s not over. It’s just postponed a little bit.”

Quite simply, you can't find a flaw in his argument. You'd do the same.

Chung will also be tough to replace, but fortunately the Patriots were proactive there, too.

Before grabbing Uche and Jennings to fill the void of losing three linebackers in free agency, Belichick and his Klee took a player at a position where they didn't have a glaring need. They lwere impressed with safety Kyle Dugger from the noted football factory Lenoir-Rhyne so much, they took him with their first pick (after trading out of the first round), the 37th overall. This in spite of the fact  the secondary was the strength of the team. If they're looking for someone with the tools to drop down into the box, defend the run as well as the middle of the field, stay with tight ends and backs in the passing game the way Chung does, they couldn't do much better than this 6-1, 217 lb specimen. He'll need to get up to speed dealing with NFL level talent after basically playing against community college competition. But if he can adjust quickly, he should be able to approximate what Chung gave you in terms of pure talent. 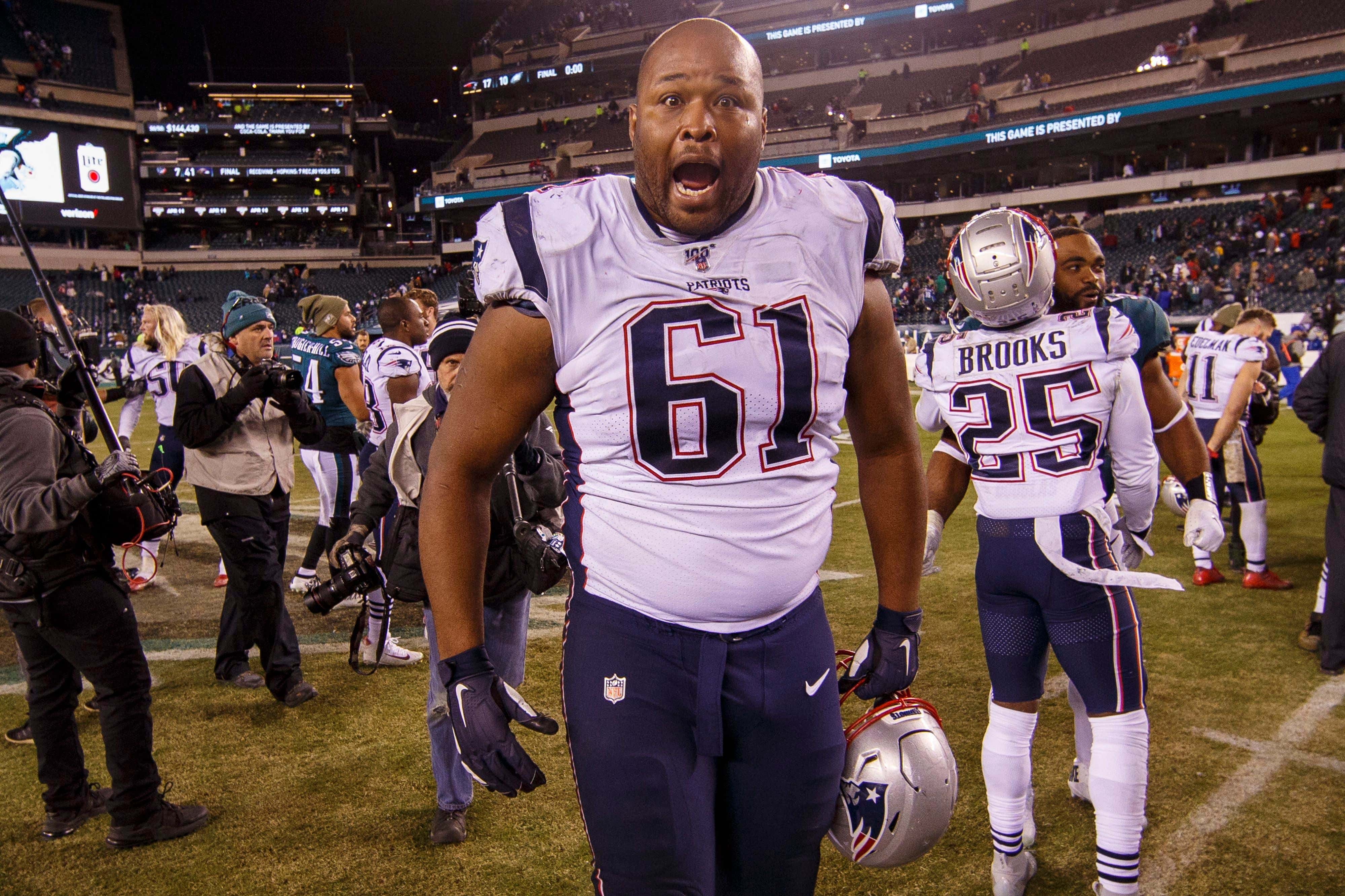 Remember that at the 2011 Combine, Marcus Cannon's physical showed some "irregularities." Which turned out not to be small hands or male pattern baldness or cooties, but non-Hodgkin lymphoma. I don't imagine there are any good types of lymphoma, but that certainly is not one. It almost cost him his chance to get drafted. For sure it made him drop, all the way to the 5th round. And he's battled it and won. But a guy with that background doesn't need to explain himself to any man.

Cannon will also be tough to replace but … etc, etc

In typical fashion, the Patriots drafted an offensive linemen a year before they think they'll need them. The way they used a first rounder on Nate Solder a year before Matt Light retired, they took Yodny Cajuste in 2019 to redshirt for his rookie year. Not in anticipation of Cannon taking a year off to avoid a virus that didn't exist, but just to develop as insurance for Cannon and Isaiah Wynn. He got hurt and didn't play at all as a rookie. But a lot of people are high on the 6-5, 310 lb swing tackle out of WVU. Like I mentioned yesterday, my brother had a draftcrush on him and I'm looking forward to see if his instincts are right. He is after all, the only guy I know who picked them to draft Logan Mankins. And he kinda worked out.

Reportedly, the Patriots told players to follow their hearts.

I sat across from the studio desk from Dale Arnold for two years and I can confirm he heard regularly from people in the Pats' hierarchy, so I'll take it as confirmed that this is what they told everybody. Do what's best for you and your family, with the team's blessing. But do it now so the rest of the team can get busy chasing the seventh banner that's eluded us since the season before last. Or words to that effect. No pressure. Football comes second. The organization does care about the guys who put on the pads and sacrifice so much. But there's still work to be done. The good news is that, for now at least, it would appear yesterday was the full extent of the damage. The McCourty twins in particular have expressed a lot of concerns about the league's plan, but if they were taking the year off as well, we'd know by now.

The cap space this has freed up is ridiculous, and the opted out players' contracts are now extended.

In that regard, the news gets even better:

This might not mean anything in the here and now. But guys around the league are signing for huge contracts right now. There are still unsigned free agents out there who could help, like Jadaveon Clowney or guys asking for a trade like David Njoku. But even if it doesn't mean a signing now, it carries over into next year and could make them huge players in free agency. As well as give them the space to lock up Joe Thuney and some others long term. They have never been anywhere close to having this kind of money to spend. And it could turn the negative of the opt outs into a benefit, in a big picture kind of way.

None of this is meant to sound like I'm glad we'll be without Hightower, Chung, Cannon, Dan Vitale, Brandon Bolden and Najee Toran. Just that, after sleeping on it, you realize how it's not the end of the world. It's a chance for younger guys to step up. For the organization to prove that caring about the players who've been part of this Dynasty isn't just talk. And to give them a financial advantage the likes of which we've never seen before. We'll get through this.

Finally, my name is Old Balls, and I approve this message.